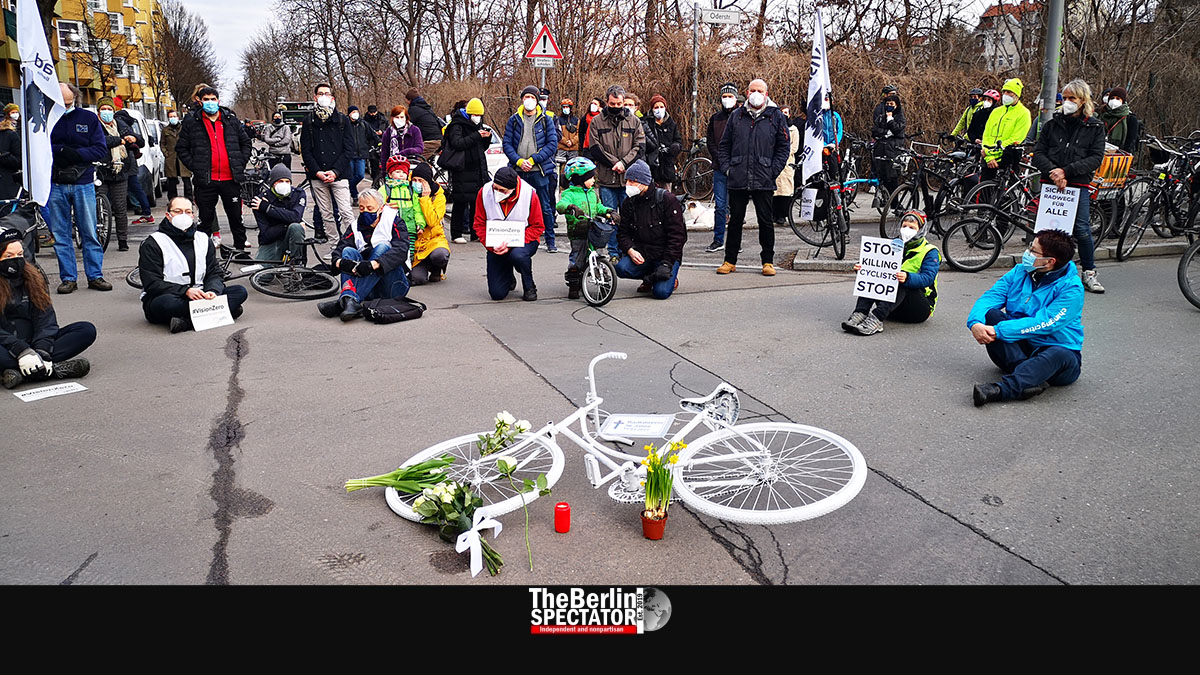 On Thursday morning, a cyclist died in Berlin, shortly after she was run down by a truck. Just hours after the accident, some 70 Berliners commemorated the victim.

Berlin, March 18th, 2021 (The Berlin Spectator) — In the late afternoon, dozens of people, most of them were cyclists, came to the intersection of Oderstrasse and Siegfriedstrasse in Berlin’s Neukölln district, in order to commemorate a 56-old woman who was killed by a truck on Thursday morning. The small crowd included members of cyclist organizations, District Mayor Martin Hikel and even the victim’s widower.

During the ceremony, Helmut Große-Inkrott of the NGO ‘Netzwerk Fahrradfreundliches Neukölln’ (‘Network Cycle-Friendly Neukölln’) held a speech. He accused “those in charge” of traffic policies of “irresponsible non-action”. A more radical approach in the fight for more safety on the roads, especially for cyclists and pedestrians, was necessary, because politicians and the administration had procrastinated instead of acting, he stated.

After the speech, a long moment of silence was observed. When cyclists get killed in accidents in Berlin, the organization ADFC brings a white bicycle to the scene of the accident, which serves as a reminder. People who see it will know what happened at Oderstrasse. The white bike that was brought there today will remain for a year. At the commemoration event, District Mayor Hikel told The Berlin Spectator an improved infrastructure for cyclists was important.

The lady who died this morning was the only person to lose her life in an accident that involved a bicycle in Berlin this year. In 2020, 19 cyclists were killed on the streets of the German capital. Statistically, cyclists themselves are to blame for about half of all accidents they are part of. In the other roughly 50 percent of cases, other traffic participants, mostly motorists, are responsible.

Frequently, cyclists get killed in accidents which involve trucks that make right turns. In many cases, the drivers do not see cyclists who intend to continue straight ahead. This is what happened this morning. But today’s case is a little more complicated. According to a statement by the Berlin Police Department, the victim was riding on the sidewalk when the truck-driver made his right turn into the driveway to an industrial park. Part of what the police call a sidewalk used to be a bike lane and still has its markings.

After the accident, police officers who rushed to the scene tried to revive the victim. These efforts were continued by medics who arrived shortly after. But, sadly, the woman died at the scene of the accident.

In another accident, a 22-year-old cyclist was badly injured last night. In this case, the victim was crossing the street at Herrmannbrücke. He was hit by a car and suffered severe head injuries, but survived. This accident happened in the Neukölln district as well.