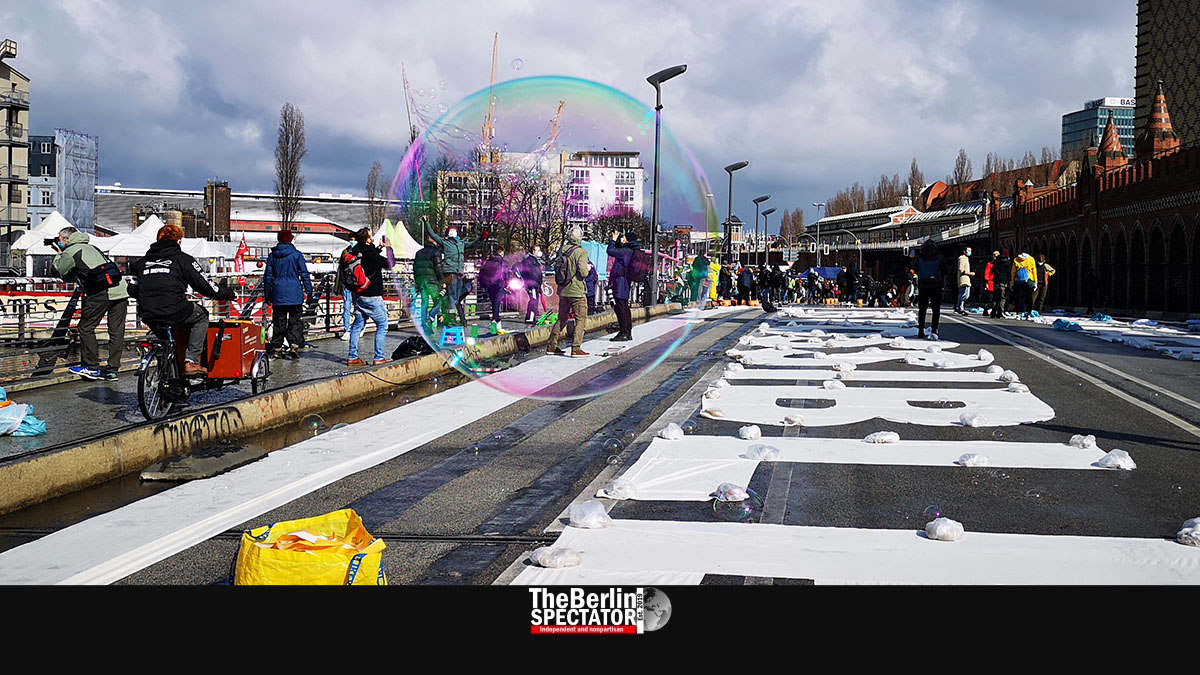 In Berlin, the Fridays for Future movement was back in action today. In several ways, pupils demonstrated for bold action against climate change. The protests were part of an international action day.

Berlin, March 19th, 2021 (The Berlin Spectator) — For the first time in months, the Fridays for Future movement has staged what it calls an “International Climate Strike” again. The protest was supposed to remind politicians to intensify their efforts in the fight against climate change. In order to comply with the Corona rules, the organizers provided a video stream of their activities, so that people could follow them from home.

On Oberbaumbrücke, one of Berlin’s more famous bridges, there was no traffic this morning. Police rerouted traffic via other bridges while Fridays for Future activists painted it. They wrote the words “Another World is Possible” on the street on the bridge, as well as symbols in many colors. Every 30 minutes, the colors were washed away by rain, just before the Sun reappeared. Giant soap bubbles were made. The whole performance was supposed to say: “We are back. Hey, government: While you fight Corona, do not forget the climate.”

The painting activities at Oberbaumbrücke were going to take until 3:00 p.m. CET. This protest had consequences for the usually tight traffic between the two sides of the Spree river. All participants wore Corona masks and kept their distance. In addition to the event on the bridge, a boat protest was supposed to commence at 1:00 p.m. at the Island of Youth. On top of it all, a bicycle protest was organized as well.

“The climate crisis already affects thousands of people in the world”, Hannah Pirot, a Fridays for Future member, said. “We need systematic changes because the climate crisis is the result of structural exploitation and ecological destruction. Fighting the climate crisis also means championing for an anti-racist, feminist and solidary society, and to think about a a fair way of cohabitation”, she stated.

While this quote partially sounds revolutionary, Fridays for Future is a lot more moderate than Extinction Rebellion. Especially before Corona, Fridays for Future conveyed its message by skipping school and staging peaceful protests on Fridays. The other movement mentioned intends to disrupt and provoke. In September of 2019, as many as 1.4 million people joined Fridays for Future protests in Germany alone.

Fridays for Future was set in motion by the Swedish teenager Greta Thunberg. By now, she has brought her message to the United Nations in New York and world leaders such as Germany’s Chancellor Angela Merkel. In Germany, Fridays for Future activists intend to be elected into the Berlin Bundestag in fall on Green tickets.