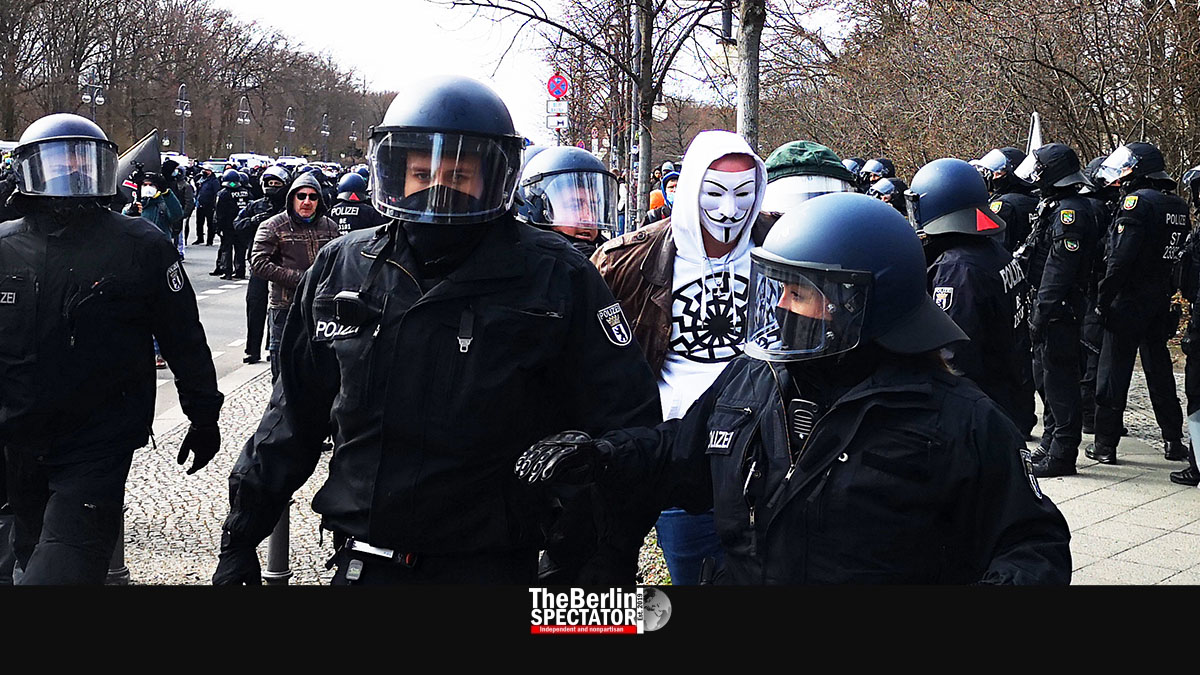 In Berlin’s city center, a few hundred Nazis staged a registered protest today. The event did not last too long because the participants did not follow the Corona rules. They also clashed with counter protesters.

On ‘Strasse des 17. Juni’, a major street on the western side of Brandenburg Gate in Berlin, some 250 Nazis and other radical right-wingers assembled in the early afternoon, for a rally that was supposed to last until the evening. Many of the participants were dressed in black and wore symbols that unveiled their extremist ‘views’. Quite a few of them seemed to be intoxicated. The official motto of the event was ‘Peace, Freedom and Sovereignty’. According to their propaganda, Germany is still occupied by “foreign powers”.

The Nazi protest started in the morning, a police spokeslady told The Berlin Spectator. Some 150 members of the “hooligan scene” had assembled at the Victory Column, she said. Later, a hundred more participants had arrived. The police outnumbered the radicals by far. At about 1:30 p.m., the police ordered the protesters to adhere to the Corona rules, by wearing masks and keeping their distance. Since they failed to obey the order, the police ended the protest in the afternoon.

On a regular basis, individuals were arrested. They were removed from the crowd by officers in riot gear and taken to a police van where their data were registered. Whether any of the “hooligans” remained in custody is unclear. At least one them had thrown a bottle in the direction of counter protesters, some of whom were part of anti-fascist left-wing groups. Police managed to keep the opposing protesters apart, except in one case. In the morning, there was a brawl between them, but police ended it quickly.

In the afternoon, some of the counter protesters managed to get close to the Nazis. They shouted in their direction: “Get lost, Nazis!” On the eastern side of Brandenburg Gate, they had a van with giant loudspeakers, but hardly anyone listened what they had to say, or to the aggressive music they played. A big sign on the van read “F*ck off, Nazis!”.

The right-wing extremists included self-proclaimed “Citizens of the Reich”, a misguided group that says the Federal Republic of Germany does not exist. There needs to be a peace agreement with the United States and Russia, they believe. They frequently stage their little rallies in Berlin’s government quarter. A car parade by right-wing radicals that was supposed to take place as well was cancelled because of a lack of participants.

On top of it all, a Corona denier protest was supposed to take place at Alexanderplatz, one of the most famous squares in Berlin. The Berlin Spectator’s reporter was on site from 2:00 to 2:30 p.m.. He found shoppers only, who were standing in long lines since they wanted to enter clothing stores under the strict Corona rules.