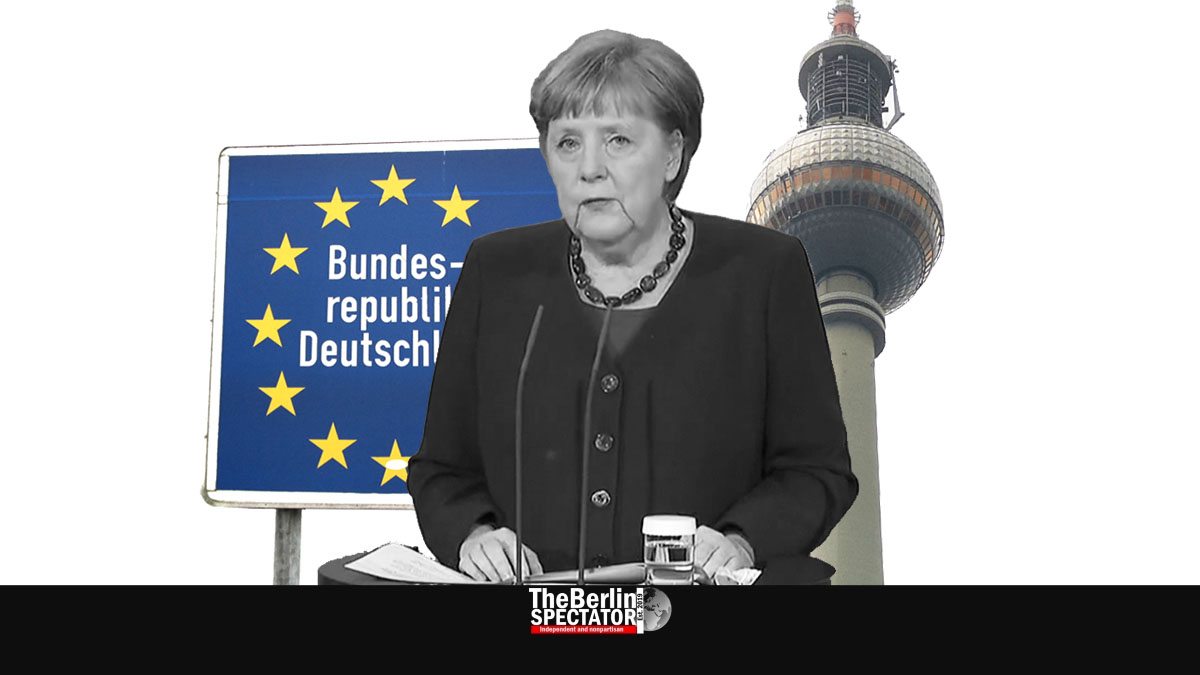 In Germany, the number of new infections is growing rapidly yet again. Within days, the “emergency brake” will have to be applied. The country is falling into another difficult period.

Berlin, March 20th, 2021 (The Berlin Spectator) — Just as experts had predicted, the infection numbers are increasing rapidly in this third wave. One day ahead of the first day of spring, a season many had developed high hopes for, it is clear that the recent easing of some restrictions will have to be retracted. On Friday evening, Germany’s Chancellor Angela Merkel announced the “emergency brake” would have to be pulled because of the increasing numbers. She and her colleagues from the federal states had agreed on this mechanism earlier this month.

What applying the “emergency brake” means is that the rules of the stricter lockdown that had applied until early March will kick in again once the Incidence Number in a region or federal state exceeds 100. This has already happened in countless counties and seven federal states. They are Thuringia, which just exceeded 200, Saxony (133.8), Saxony-Anhalt (118.5), Hesse (112.8), Brandenburg (107.6), Bavaria (103.6) and Berlin (101.3). In the capital, seven out of twelve districts are above 100 now. The Seven Day Incidence Number for the entire country of Germany stood at 99.9 on Saturday morning.

A year ago, in March of 2020, the first big Coronavirus wave hit Germany. Now, the scenario is repeating. The difference is that this third wave is being pushed by a mutation of the virus, the ‘British one’, which is also known as B.1.1.7. It is more contagious and therefore more dangerous. This variant is already dominating the pandemic in Germany. In three out of four new infection cases, this mutant is being identified these days.

Leading experts believe the “emergency brake” needs to be pulled right now. They include Susanne Johna, the head of the doctor’s association ‘Marburger Bund’. She told the ‘Neue Osnabrücker Zeitung’, starting during the Easter holiday, she expected a more critical Corona situation than the country had been in around New Year’s Eve. The fact that many elderly Germans had been vaccinated by now was not sufficient to avoid a health crisis. The beds that were vacant at Germany’s ICUs could fill up quickly.

Susanne Johna criticized the federal government and the state governments by saying it had been “irresponsible” to ease Corona restrictions while the third wave with those mutants was already building up. That way, the clinics had to expect the third extreme situation within one year, she told the newspaper. Mrs. Johna said more than 9,000 caregivers in Germany had already quit since the beginning of the pandemic because they had not been able “to take it anymore.”

A Million Doses per Week

On Friday, Mrs. Merkel and the First Ministers had decided to apply a “two pillar vaccination strategy”. What this means is that the vaccination centers located all over Germany will continue vaccinating people. So will mobile vaccination teams. On top of it all, general practitioners will be allowed to vaccinate patients starting in April. The issue: Only about 1 million doses will be available for them at first, which translates into 20 doses per doctor per week. This amount is supposed to triple until the end of April.

The Robert Koch Institute says, 10.18 doses of vaccine have been used in Germany, so far. The country has some 83 million inhabitants. Angela Merkel said her previous statement according to which all adults in Germany will receive vaccination offers until the end of the summer would likely still apply, in spite of the recent issues with the AstraZeneca vaccine product and the vaccine deliveries.