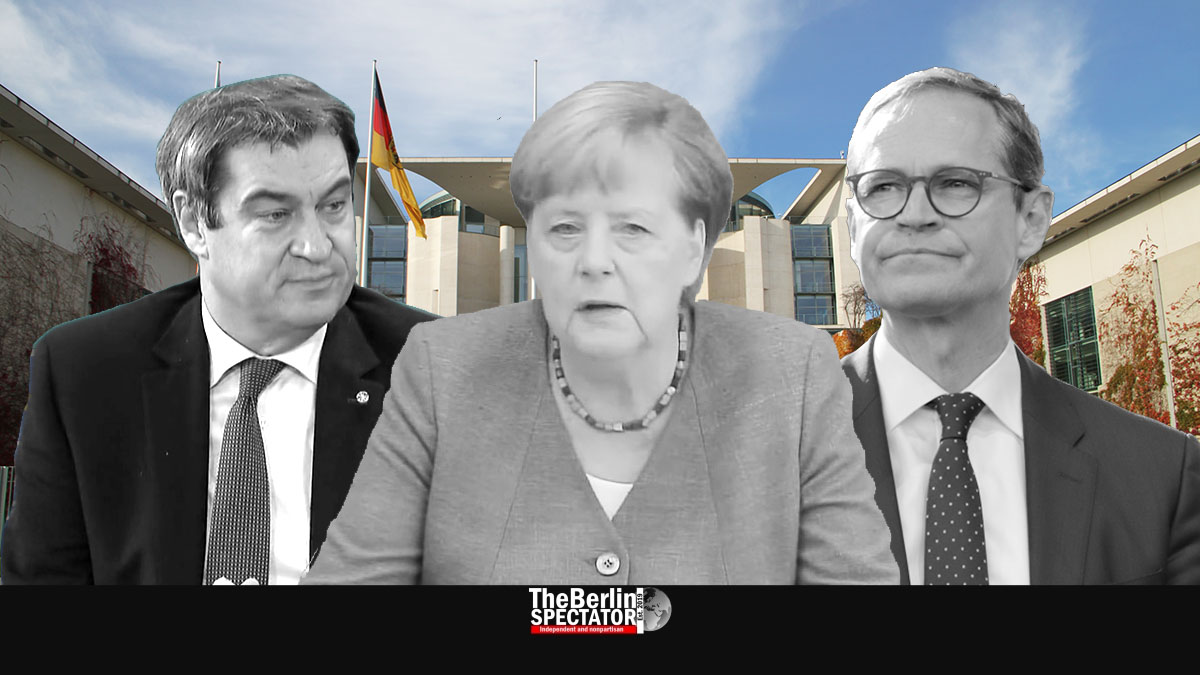 Chancellor Angela Merkel and her colleagues from Germany’s federal states will take decisions in regard to the Corona rules today. She wants to tighten the rules and prolong the lockdown until April 18th.

Berlin, March 22nd, 2021 (The Berlin Spectator) — Ahead of the Corona conference that is scheduled to take place this afternoon, discussions are already going on between the Chancellery in Berlin and the state chancelleries and city halls in Germany’s sixteen federal states. Generally, everyone involved seems to agree that the rules have to be tightened again, because of the rapidly rising infection numbers. But there are arguments about how exactly the new approach might look like.

In a draft decision paper several German-language media are quoting, it says without restrictive measures, an overburdening of the German health system in April would be likely. The Chancellery believes the new Coronavirus variants may lead to that kind of situation. That is why Angela Merkel is pushing for strict new measures. She even wants to discuss nightly curfews that would apply from the late evening until 5:00 a.m. in the morning, in counties or regions with Incidence Numbers above 100.

If the First Ministers agree, people will only be allowed to leave their homes at night for “weighty reasons”. Of course, a nurse, police officer of bus driver on night shift would not get into trouble at night. But almost everyone else would. Nightly curfews are only one of several measures that may apply in high-risk counties or cities with high infection numbers. At Incidences of 200 or higher, all schools and kindergartens might have to be closed. This point will be discussed this afternoon as well. There are those who say that looking at the Incidence Numbers only was not sufficient, now that they are high again.

Because of the upcoming Easter vacations, domestic and international trips are on the agenda as well. In the draft, it reportedly says the federal government and the federal states appealed to all citizens to refrain from all unnecessary trips in Germany and abroad. The document also warns of “different COVID-19 variants and their global spread”. This development showed that tourist traffic across borders needed to be reduced to a minimum. Mrs. Merkel, thirteen First Ministers, two First Mayors and one Governing Mayor will also have to decide whether travelers who return to Germany will have to get tested for Corona, no matter whether they visited a high-risk country or not.

One thing is crystal clear: Something will have to be done, because the third wave is pushing up the infection numbers rapidly. Germany’ Incidence now stands at 107.3. For weeks, the numbers have been increasing. Earlier this week, the highest number of new infections since January was registered. Recently, experts at the Robert Koch Institute had predicted this kind of development. They had said, by April 12th the numbers would be a lot higher than they had been around Christmas. Their prediction might prove to be right, if things continue developing the way they are right now.

At 2:00 p.m., the Corona conference is supposed to commence online. In the evening, Chancellor Angela Merkel, Berlin’s Governing Mayor Michael Müller, who heads the Conference of First Ministers right now, and his deputy Markus Söder, the First Minister of Bavaria, will announce the results of their discussions. Only once in this crisis, a Corona conference ended in the afternoon. Most of the time, they take a lot longer.