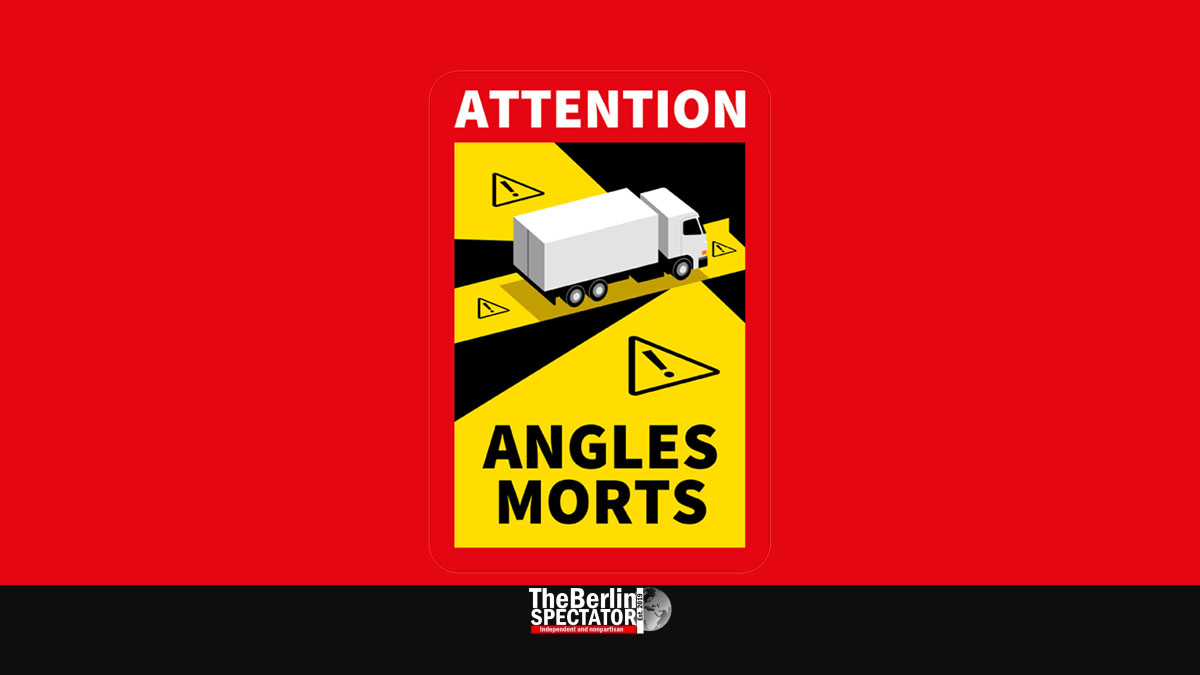 On the streets of Berlin, two cyclists were killed within four days. In both cases, right-turning trucks crushed the victims. Knowledge and a technical add-on could save lives.

Berlin, March 23rd, 2021 (The Berlin Spectator) — The streets of Berlin can be dangerous. Cyclists who underestimate big trucks in certain situations are risking their lives. Within four days, two women who were riding their bicycles were knocked down and killed by trucks. The first terrible accident of this kind happened on Thursday of last week in Berlin’s Neukölln district. A 56-year-old lady was riding on a sidewalk that still has markings of a former bike lane in Siegfriedstrasse, when a truck made a right turn into an industrial park located right in a residential area. She died on the scene.

On Monday, the Berlin Police Department had to spread almost the same sad news in another case. This time it happened in Weissensee (German spelling: Weißensee) at 9:20 a.m. CET. In this case, a 66-year-old woman was riding her bike along Berliner Chaussee, when a truck driver made a right turn into Feldtmannstrasse. He knocked down the lady. Just like the other victim, who was killed four days earlier, she died right there, on the street. The truck driver was in shock once he understood what had happened. He was treated by medics.

The two women were the first two cyclists to lose their lives on the streets of Berlin in accidents of this kind this year. In 2020, many cyclists died in or after accidents in Berlin. While the Police Department reported 17 deadly bicycle accidents, the German Cyclists Association (ADFC) counted 19. It is a matter of definition. In two cases, the police did not register them as bike accidents. However, as many as eight of those deadly accidents were caused by right-turning trucks, and one by a right-turning bus. Yes, there is an obvious pattern and it needs to be broken.

Out of the Way

Trucks that make right turns are a threat, especially to cyclists. In most cases, the drivers should notice the cyclists while they approach the street they intend to turn into. But in too many cases they do not see them, or they assume the cyclist they saw earlier did not reach the intersection yet. If cyclists suddenly appear next to trucks, especially on their right, there are situations in which the drivers simply cannot see them, no matter what they do. This does not mean the truck drivers are not at fault. But it means cyclists need to get out of the way, no matter who has the right of way.

These are ways to prevent those deadly right-turn accidents from happening:

> Truck drivers should not exceed walking speed from the moment they start their right turn until they have actually turned. That way, they would give cyclists they did not see some time to get out of their path before it is too late.

> All big trucks should finally be equipped with sensors and apps that sound an alarm when a cyclist is close.

> Cyclists should never ride right next to big trucks, even when they have the right of way. They should wait until any big trucks are gone, before they approach intersections. No matter whether they are riding on a bike lane or on the street, they should always make sure they are far behind any trucks which are either approaching an intersection, waiting to take a right turn or which are in the process of turning right. Cyclists should never be next to those trucks in those situations. And they should always keep an eye on all huge trucks and other motor vehicles around them.

Awareness can save lives. And there are devices that could prevent many of those accidents. For instance, the company ZF Friedrichshafen AG offers a blind stop monitoring solution. Making those or similar systems mandatory would make a lot of sense.