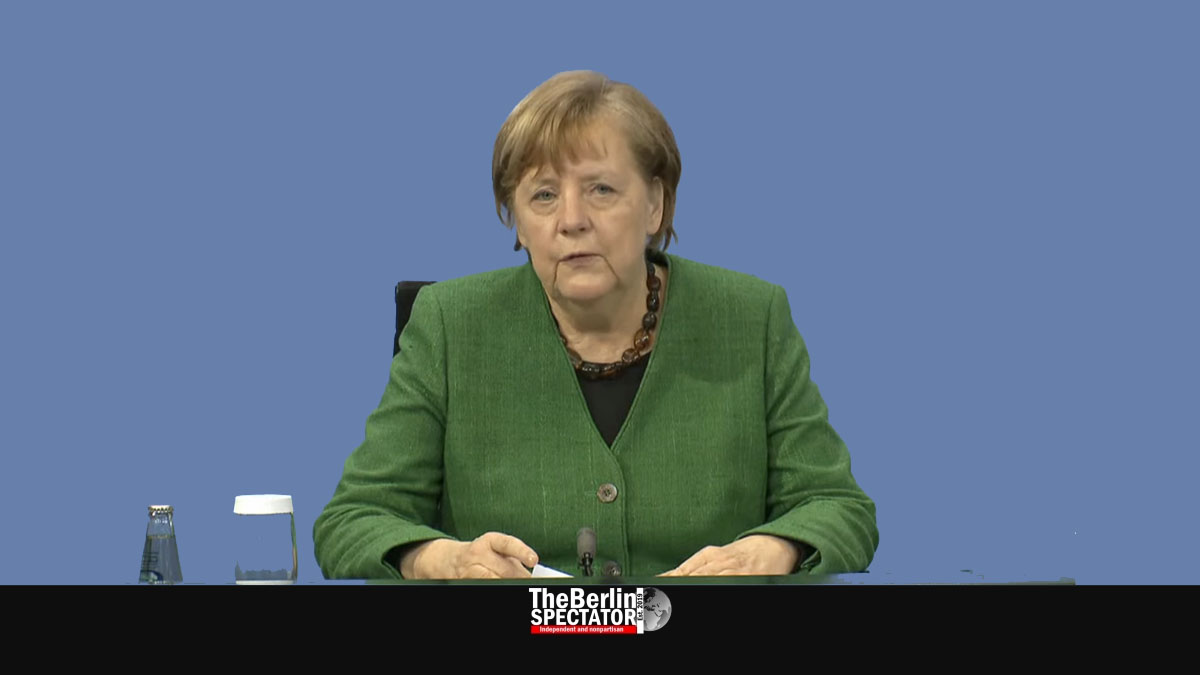 Germany’s head of government, Angela Merkel, and her colleagues from the capitals of all federal states just prolonged the ongoing Corona lockdown amid rising infection numbers. During their Corona conference, they argued about several subjects.

Berlin, March 23rd, 2021 (The Berlin Spectator) — The most difficult Corona conference since the crisis began lasted some five hours before it was interrupted from 6:30 p.m. to 1:00 a.m.. Angela Merkel used those six and a half hours to apply pressure on several First Ministers who had wanted halfhearted measures only, in spite of the seriousness of the Corona situation in Germany.

When the Chancellor finally appeared at a press conference in the early morning hours, it became clear that she had forced through some of the stricter measures she had insisted on. Of course, she had help by the “caution team”, as Bavaria’s First Minister Markus Söder put it. These are the decision that were taken:

>> The ongoing lockdown was prolonged until April 18th, 2021, meaning today’s rules remain valid until then. The next Corona conference, during which it will likely be prolonged yet again, is scheduled for April 12th.

>> Five “resting days” from April 1st to 5th, the Easter holidays, are supposed to slow down the third Corona wave. The principle people are supposed to follow is “We stay at home”. On Saturday, food stores will be open. Holy Thursday is supposed top be treated as a holiday, meaning even supermarkets are supposed to remain closed, at least in theory. What contacts are concerned, up to five people from up to two households may gather. Children up to 14 years of age are not being counted here.

Restrictions Depend on Incidence

>> Big gatherings in public areas are generally forbidden during those five days.

>> Any restaurants in any federal state that were allowed to open their outdoor tables need to close.

>> Vaccination and testing centers are supposed to remain open during the Easter holidays.

>> Tightened restrictions apply in counties with Incidence Numbers above 100, and there are many of those yet again. Those can include extra contact restrictions, a mandatory mask rule in private cars and even curfews.

>> While people are not supposed to avoid all trips, there will be a new rule according to which anyone who travels anyway, and returns to Germany from abroad, needs to get tested for Corona first, before boarding the plane. Hotels and similar establishments in Germany remain closed.

>> The federal government and federal states are asking all religious organizations to refrain from observing prayer services in churches, mosques, synagogues or anywhere.

>> Companies are supposed to let their employees work from home wherever and whenever possible.

When she finally appeared in front of the Berlin press, Angela Merkel was visibly tired. She said Germany was in a “very serious situation”. Early on in the crisis, a year ago, to the day, a similar press conference had taken place after which she had had to go into quarantine, she remembered. Back then, a doctor the Chancellor had been in contact with had tested positive for Corona.

Since, the entire country had gone through a time with successes and setbacks, Mrs. Merkel stated. “We should not let those setbacks encourage us”, she said. “Setbacks can also give people strength.” According to the Chancellor, there are aspects which have improved in the past year. “Scientists understand the virus a lot better. Doctors can give their Corona patients better treatments. Also everyone knows how they can protect themselves and others effectively.” She also said there were many kinds of tests.

“But we have not been able to defeat the virus yet. It does not give us a break”, Angela Merkel stated. The infection numbers were rising exponentially, ICU beds were filling up again. More middle-aged and young people were experiencing difficult disease processes, she stated. “We do not want an overburdening of our health system.”

In a 7-page document Mrs. Merkel and her colleagues from the federal states agreed to, it says additional financial aid for companies was being prepared. This is about businesses that have been closed for a long time, due to Corona. An additional fund is supposed to be dedicated to those companies.

According to participants, yesterday’s Corona conference, which lasted until early this morning, was the most difficult one so far. Several federal states had insisted on letting their residents take vacations in campers, caravans or holiday apartments. But they did not get their way. Angela Merkel made clear this was not the time for easing any restrictions or encouraging people to travel.