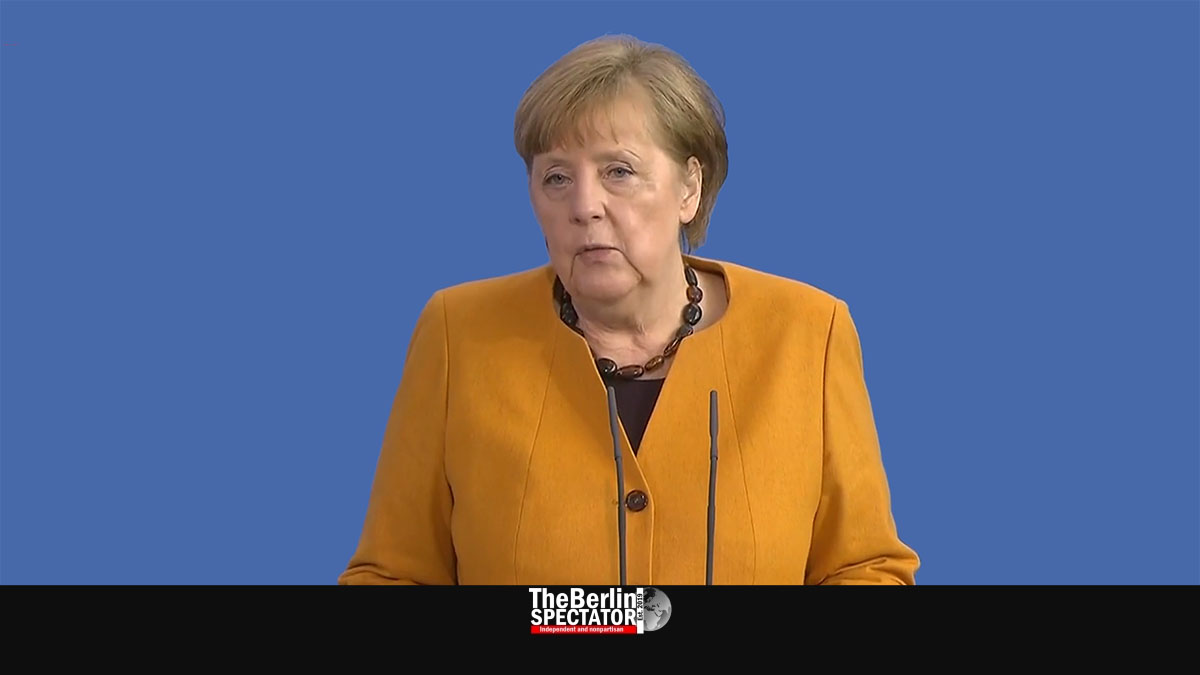 In Berlin, Chancellor Angela Merkel retracted one of the decisions that were taken during the last Corona conference, which ended on Tuesday in the early morning hours. There will not be any ‘resting days’ during the Easter vacation after all. Mrs. Merkel apologized to the nation.

Nijmegen, March 24th, 2021 (The Berlin Spectator) — In Berlin, Chancellor Angela Merkel stood in front of cameras and microphones on short notice in the early afternoon on Wednesday. She officially retracted a decision she had taken a day and a half earlier, with the First Ministers from Germany’s federal states. There will not be “resting days” during the upcoming Easter holiday after all.

Angela Merkel apologized for what she called “a mistake” that would not have been implementable until Easter. The idea of those “resting days” had been developed with best intentions, she assured the nation. But there had been too many issues to resolve within the short time available.

“Let me say this, point-blank: It was solely my mistake. I am responsible for the decision regarding those ‘resting days’ during the Easter vacation”, the Chancellor stated. She said she regretted the fact that the decision had led to even more uncertainty than there was already. Mrs. Merkel apologized for this aspect as well.

First Retraction of this Kind

A retraction and apology of this kind has not happened before, since Angela Merkel took office in 2005. The Corona conference during which the retracted decision was taken had dragged on into the early morning hours on Tuesday. All participants, including the Chancellor, were definitely tired. For one day, the federal government had defended the decision about “resting days” against critics. Today, it was retracted.

The participants of the Corona conference had agreed to Merkel’s idea to turn the Easter holiday, from Holy Thursday to Easter Monday, into “resting days” with a minimum of contacts. All supermarkets were supposed to remain closed on April 1st, 2021. In Germany, supermarkets generally do not open on Sundays and official holidays. The “resting days” would have meant that nobody would have been able to purchase food on April 1st, 2nd, 4th and 5th. This would likely have created big crowds at all supermarkets on Wednesday, March 31st and on Saturday, April 3rd, which is something the government wanted to avoid in the first place.

In her short statement to the nation on Wednesday, the Chancellor also thanked everyone who had contributed to slowing down the third Corona wave by following the rules. Even without those “resting days”, the decisions that had been taken in the Corona conference would help slow down the Coronavirus. “Together, we will defeat the virus”, she stated. “But the path is tough and rocky.”

At the Berlin Bundestag, Mrs. Merkel repeated her apology. An MP for the extremist right-wing party ‘AfD’ told her to explain why she did not ask for a vote of confidence. She replied by saying she had nothing to add to her statement regarding the retraction of the “resting days” during the Easter holiday. For the far-left ‘Die Linke’, Dietmar Bartsch asked Angela Merkel to make sure she was still being supported by her own government. The MPs for the coalition parties CDU, CSU and SPD demonstrated their support for her immediately, by applauding.

Those “resting days” would not only have created huge crowds at virtually all supermarkets in Germany, especially on March 31st and April 3rd, but also issues with broken delivery chains and the labor law. The retraction took place just on time, eight days before Easter. All other decisions that were taken at the Corona conference on Monday and Tuesday apply.