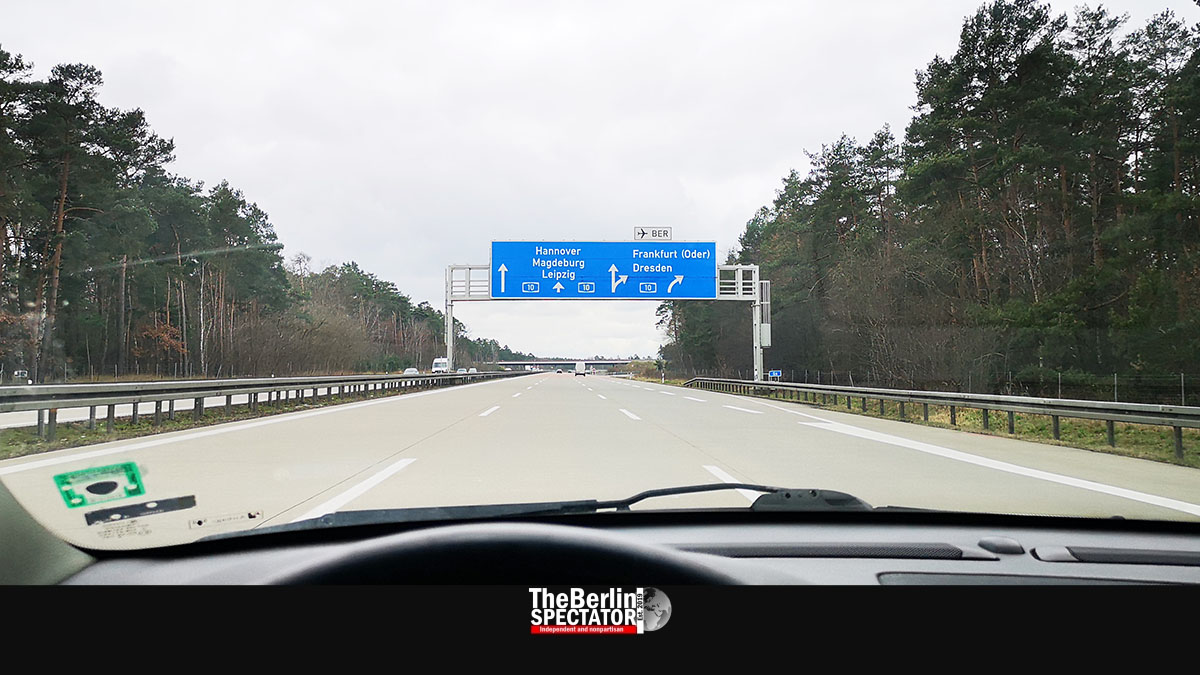 Nijmegen, March 24th, 2021 (The Berlin Spectator) — O.k., let’s kick it. The trip to Nijmegen, which is 646 kilometers (401 miles) away, should be doable in six hours. This is easy as pie, right? Except getting out of Berlin turns out to be quite a challenge. A gazillion traffic lights are waiting. Even the little shortcuts Google Maps gives me do not really help. By the time I get to the Zehlendorf Autobahn junction it is 10:51 a.m.. Hell! This is still Berlin. How in the hell am I ever going to get to the Netherlands at this pace?

Ages later, a statue of the Berlin Bear waves me goodbye on the city freeway. A few kilometers down the Autobahn, a sign gives me the choice between Frankfurt/Oder and Dresden or Magdeburg and Hanover. The drill is to cross “the GDR” as quickly as possible. Hanover sounds good. As I pass that big sign, I got 57 kilometers (35 miles) covered, and it is already 11:00 a.m.. I will have to make this a race if I want to fulfill the mission on time.

But the race is being interrupted just two minutes and one mile later. Thank you for those repairs, Brandenburg, but you are slowing me down. So is all the traffic. Especially those talented individuals who insist on occupying the narrow left lanes in construction sites, but are afraid of overtaking the trucks on the right at the same time, are pretty annoying. At 11:10 a.m., I reach the Potsdam Autobahn junction. How much headway have I made? Hardly any. But another few miles down the Autobahn, just as it starts drizzling, the race can finally begin.

At 11:55, I pass the main Magdeburg exit. Alright! I will make it to Nijmegen in six hours, right? This illusion lasts for exactly 12 minutes. At that point, hundreds of trucks are blocking the right lane. “I do not drive a damned truck, so I will be able to continue my race”, I am thinking at this point. But the hope evaporates as well, another two minutes later. A major traffic jam spoils my plans. An ambulance that squeezes through all the traffic with blaring sirens makes everyone think an accidents caused this mess. But the traffic news tell a different story: Apparently, a “one-day construction site” has caused a traffic jam on a stretch of 11 kilometers (7 miles). Now I would need an F-16 to make it to the Netherlands on time.

Yes, people are not supposed to travel. This was a family thing which could not wait. I had to see my daughter in the Netherlands. The trip included the crossing of one international border. Since the Netherlands consider Germany a high risk country, because of its high Corona infection numbers, individuals who enter the country from there usually have to go into quarantine, but not if they visit direct family members such as a child of theirs. In this case, no quarantine is needed on the way back either, according to the Corona rules. Besides, I pretty much live in a voluntary quarantine anyway.

After an hour and ten minutes of swearing, the reason for the mess appears: As it turns out, the freeway maintenance authority repaired two harmless potholes. The genius decision to do this during the day made thousands of people wait for longer than an hour. Finally, the race can continue. But not for long. At a service station in the middle of nowhere, I am picking up my passenger: Mr. Big Tasty will be occupying the seat next to me for a little while. It may not exactly be the right lunch for a diabetic, nor is this hamburger too kosher, but I like it.

At the Autobahn exit to Helmstedt, I know I finally made it to former West Germany. This is where the inner German border used to be at. Hannover cannot be too far anymore. I pass Brunswick (‘Braunschweig’). The fact that the official abbreviation for this city is “BS” already says it all. “BS” appears on number plates of cars registered there and on signs at Autobahn exists. It’s all “BS”, I guess.

The best part of the trip is the fact that I reach Oberhausen earlier than expected. And the ride to the Dutch border, Arnhem and Nijmegen is a piece of cake. At 5:24 p.m. CET, I reach my destination, in spite of that bad traffic jam and the Big Tasty delay. My mission to get there in six hours failed but, considering everything, the trip was sort of o.k..