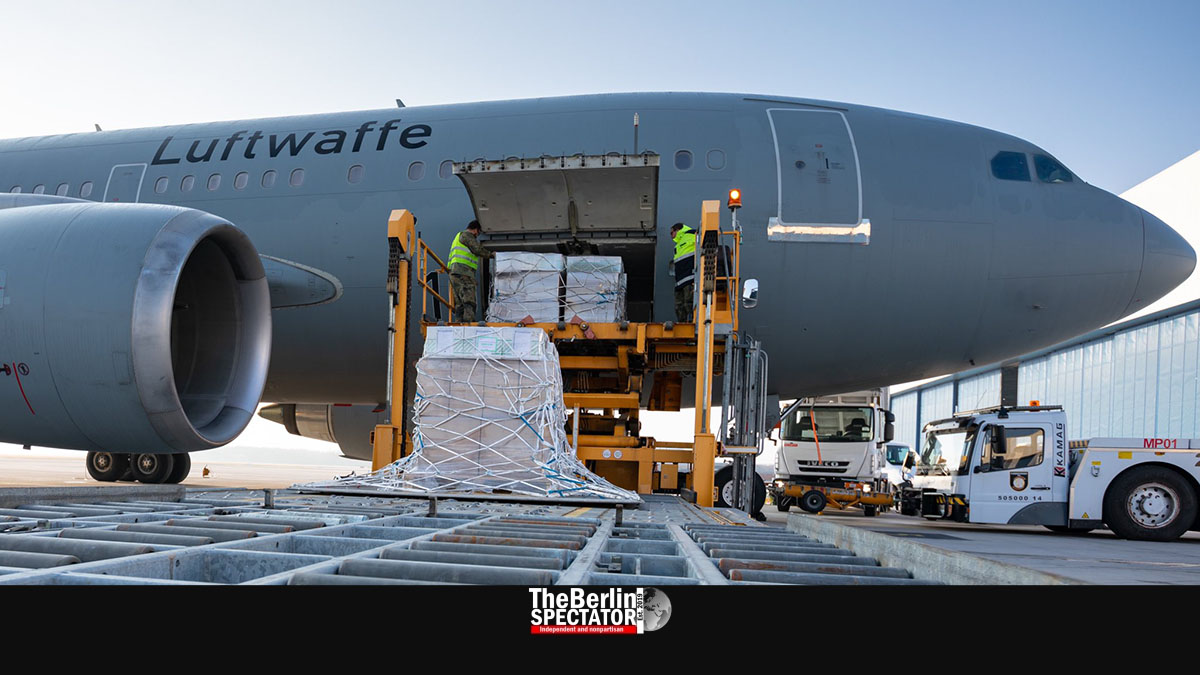 The German Air Force is flying respirators to Brazil. An aid flight left Cologne-Bonn Airport in the late morning. With thousands of Corona-related deaths per day, the situation in Brazil is alarming.

Berlin, March 26th, 2021 (The Berlin Spectator) — After completing its help mission in Portugal, Germany is helping Brazil with badly needed respirators. Eighty of them are being flown to Manaus in north-western Brazil right now. Shortly before noon, an Airbus A300 owned by the Air Force embarked on its journey of 18,000 kilometers (11,184 miles). There will be a stopover for refueling purposes in Cape Verde, and two more on the way back, in Martinique and at Lajes airfield in Terceira.

“In the fight against Corona, we stick together”, a statement from the Foreign Ministry in Berlin read. According to the Air Force, the aid flight was ordered by both the Foreign and Health Ministries. “Loading material (respirators), informed the media, boarded the plane, closed the door. We can take off now”, the Air Force tweeted. The team posted a photo of a mission banner in German and Portuguese which said “#Hilfseinsatz, Ajuda humanitária, März 2021” (“Aid operation, humanitarian help, March 2021”).

The region around Manaus has been hit by the Corona pandemic badly. But this also applies to the entire country of Brazil. On Thursday, the authorities reported more than 100,000 new Coronavirus infections within one single day. More than 300,000 Brazilians have died from COVID-19. In a 24-hour period from Wednesday to Thursday, as many as 2,700 Corona patients lost their lives.

One of the biggest problems is the Coronavirus mutation P.1 which is far more infectious than the “old” variant that has spread all over the world since early 2020. Another issue is President Jair Bolsonaro’s Corona approach. From the start, he had downplayed the pandemic even when he himself was infected, similar to former U.S. President Donald Trump. Bolsonaro even rejected the idea of forming a Corona task force until two days ago, when it was almost too late. Critics say his policy of neglect had already cost many lives.

On top of it all, there is a shortage of vaccine in Brazil. Medical devices are badly needed as well. That is why the German aid flight took off today. It should arrive within about 18 hours.

Since the Corona pandemic hit the world, Germany has helped Italy, France and other countries by accepting some of their Corona patients at hospitals in different cities and regions. Just yesterday, a German aid operation in Portugal ended. It involved eight doctors and eighteen caretakers who helped treat Corona patients because the Portuguese health system was overburdened.