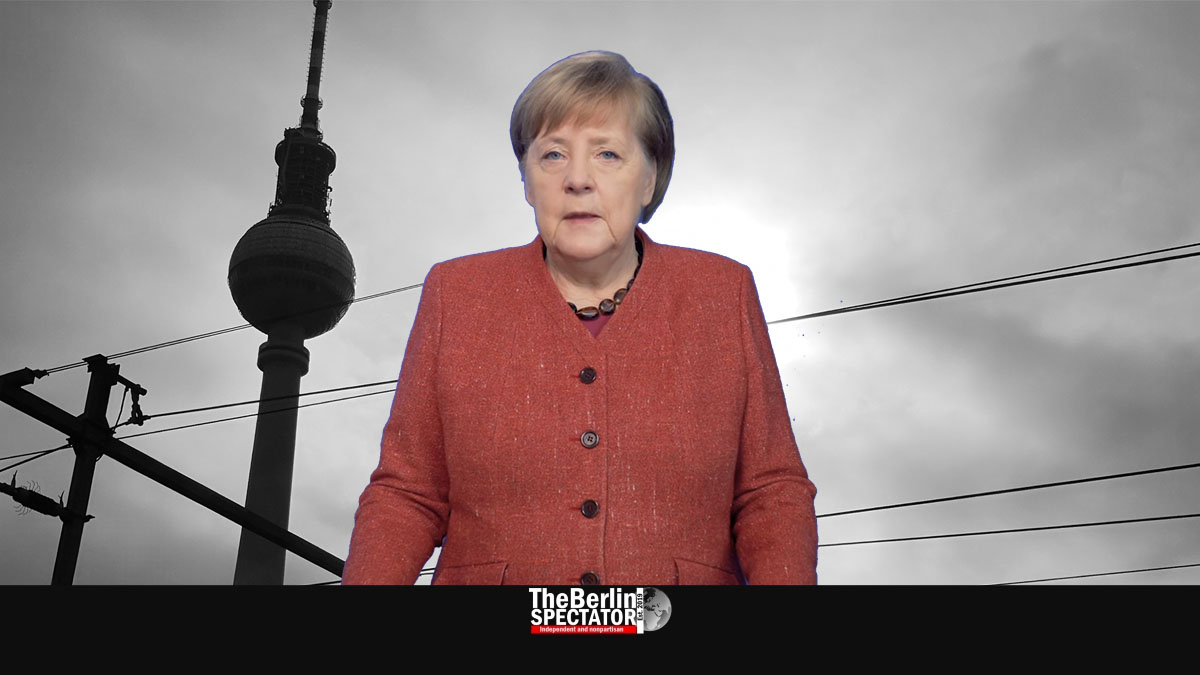 Germany’s outgoing Chancellor Angela Merkel was interviewed in a popular television talk show on Sunday night. Her statements were revealing. She wants to handle the Corona situation Germany is in by taking strict measures. But her own people are preventing the approach right now.

Berlin, March 29th, 2021 (The Berlin Spectator) — Germany is back in a situation it has seen before. It is serious. In this case, it is even more serious than it was a year ago, when the first wave hit, or in October, when the second one was building up. Instead of adhering to the agreement they have with their mother, for situations of this kind, the kids come up with excuses. They want to open shops and cinemas, while mother insists on closing it all down again. In the meantime, time is running out. The third wave is pushing up the infection numbers at an alarming pace. Soon, they will be at levels this country has not experienced.

Angela Merkel answered the obvious questions on ARD television. Anne Will, a prominent talk show host whose program is named after her, wanted to hear why things are not moving in the right direction a lot more quickly, why exactly Mrs. Merkel apologized for her failed attempt to make Holy Thursday a “resting day”, and why the First Ministers in their federal states do not follow the agreement according to which the stricter lockdown rules will apply as soon as the Incidence in a state exceeds 100.

Even before the Chancellor sat down in the studio to answer all of those questions, it was sort of obvious that Mrs. Merkel and some First Ministers are the cautious ones, while some bad boys and girls caused trouble by underestimating the Coronavirus several times in a row. But having her confirm all of this is a new dimension. Angela Merkel confirmed that some First Ministers, including her own people Tobias Hans in the Saarland and Armin Laschet in North Rhine-Westphalia, who is also the chairman of her conservative party, the CDU, are breaching the latest agreement known as the “emergency brake”.

Mr. Hans told the residents of his tiny state, he would reopen everything after Easter, while his comparatively low infection numbers were on the rise already. And Laschet announced, only counties with extremely high Incidence Numbers would be shut down, even though his entire state, the largest one in the country, is in a bad fix. Hans and Laschet are not the only First Ministers who are out of line.

Berlin’s Governing Mayor Michael Müller, who is also chairman of the Conference of First Ministers, played a big role in the decision making process. The “emergency brake” was something he defended just days ago. Then, when he should have applied it because of Berlin’s skyrocketing infection numbers, he talked his way out of it during a lengthy press conference. He and his Senate decided to keep non-essential shops open for people who had negative Corona tests.

In her TV interview, Angela Merkel repeated a statement she had made a year ago, when the first wave hit: “This situation is serious. Take it seriously.” She said the third wave, which is hitting Germany hard right now, needed to be broken. For that reason, the federal states needed to up the ante. The Chancellor actually threatened them, in a way, by saying if they did not play ball, she would have to look into using Germany’s Infection Protection Act to make sure the right policies were put in place.

Angela Merkel told Anne Will, the law said that extensive measures needed to be taken once the Incidence Numbers exceeded 50. “But nothing his happening”, the head of government stated. She also had an explanation: There was a temptation to assume things would develop in a positive way, and that Corona tests would suffice to break the third wave. “But I do not think so”, the Chancellor said.

“I believe contact restrictions and curfews are important tools”, Mrs. Merkel said on the talk show. According to her, curfews could prevent gatherings and parties in parks. She also announced something would have to be done to make companies offer Corona tests to their staff along with the opportunity to work from home.

Things would have to happen very soon, Merkel explained. In a democracy, decision processes could take time. On the other hand, the time to act was now “I will not just sit back and watch things for 14 days if the necessary changes are not being made”, she promised. “This is not the moment for reopening places”, the Chancellor stated. “We will have to act.”

She said there was something some people had not understood: “This is actually a new pandemic.” The Corona mutation that was dominating the third wave was “more aggressive and more deadly.” All necessary measures would have to be enforced. She stated it would happen, but, in a democracy, she could not just make things happen by decree.

Angela Merkel, who will quit politics and vacate the Chancellery later this year, said the scientific expertise was on the table. In this third wave, the number of occupied ICU beds was already increasing. In the Saarland, the opposite of what First Minister Tobias Hans had announced needed to be done. “Reopening shops and testing people will not solve the problem”, Mrs. Merkel told Anne Will. Especially in states with Incidences that had exceeded 100, there was no margin of discretion.

In democracy, compromises were important, Angela Merkel said. But implementing only the “good part” of decisions, while ignoring the more “difficult part” was not the right way. Not pulling the “emergency breake” in this situation was a breach of the latest agreements.