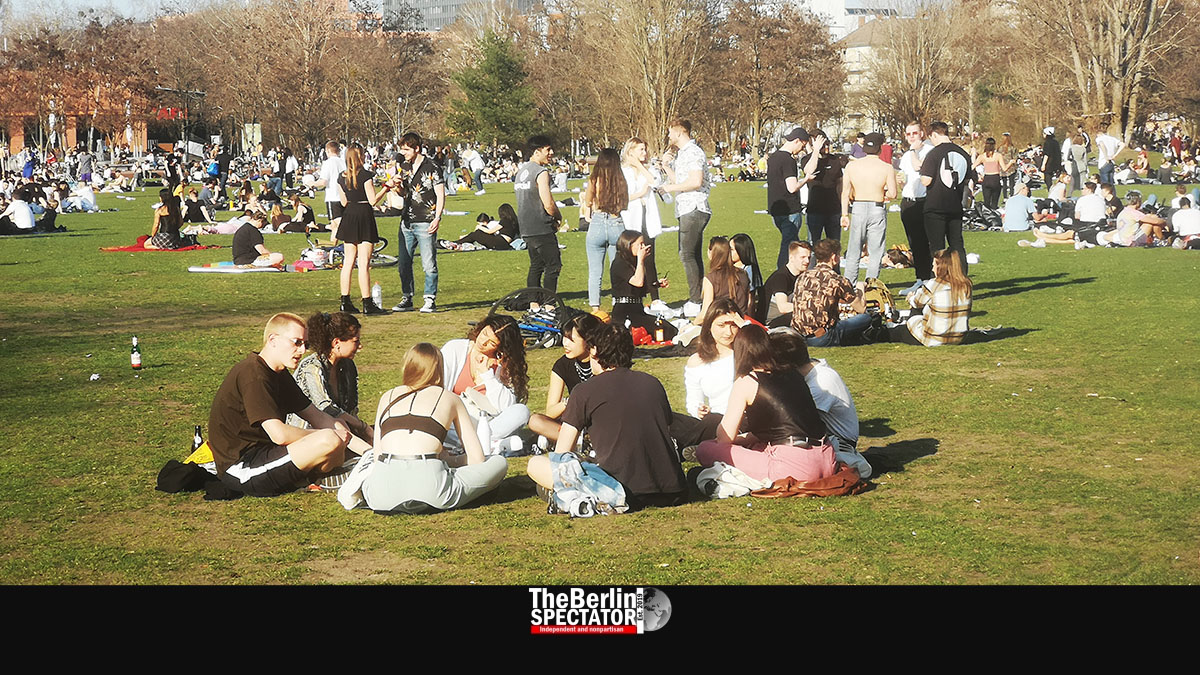 With rising temperatures, an old problem is resurfacing in Berlin. Party people in parks do not seem to care about protection against the dangerous Coronavirus at all. In this situation, their behavior could lead to more infections and even deaths.

Berlin, March 31st, 2021. Update: April 1st, 2021, 5:45 p.m. CEDT (The Berlin Spectator) — Spring just hit Germany, including Berlin. Before temperatures are supposed to fall again during the Easter holiday, the capital enjoyed two days of sunshine at up to 24 degrees Centigrade (75 degrees Fahrenheit). Families with kids, couples, dog owners and other Berliners started populating the parks again. They had picnics, especially on Tuesday and Wednesday, the two warmest days this year, so far.

At Tempelhof Field, a former airport, the runway was busy. But the only aircraft that got takeoff clearances were kites. Skateboarders, joggers, dancers and other folks enjoyed all the vitamin D and warmth the solar system’s star provided. A mobile vendor offered cold drinks, pretzels and other snacks. Some folks raced down the runway on 1980s roller skates, as if the ‘Grease’ movie with John Travolta and Olivia Newton-John had just been released.

Some Berliners did some yoga right there at Tempelhof Field and at nearby Hasenheide Park. Others meditated, read books, kissed or just talked. In fenced-in dog areas, lots of four-legged friends ran around like crazy. People watched two dozen sheep as they were consuming the grass on the southern side of the runway.

But there was trouble too. On Tuesday, police were busy fining people who did not adhere to the Corona rules at some of Berlin’s parks. At Tempelhof Field, which officially closes at 7:00 p.m., several hundred people refused to leave. Security officers on site called the police. When they arrived, and ordered a group of people to leave, two individuals attacked and insulted two officers. They were arrested. Legal proceedings for attacking officers, trespassing and a breach of the infection protection rules were initiated.

Hundreds of people filled the Park at Gleisdreieck (see main photo, taken on Wednesday afternoon, at top of page). While many of them adhered to the Corona rules by going there in groups of up to five people from up to two households, others did not. On Tuesday, police tried to get the situation under control. On Wednesday, again, hundreds of party people did not seem to care about anything, except for partying. This afternoon, hardly anyone there wore masks. Large groups of persons were gathering illegally, as if these were pre-Corona times.

On Thursday, the Berlin Police Department said officers had been attacked again on Wednesday, after they had ordered a large group of adolescents to disperse and leave ‘Park am Gleisdreieck’. Within the group of approximately 100 people, some individuals had thrown stones and bottles at them afterwards.

During the first two Corona waves, the same problem, namely ignorance and reckless behavior during the pandemic, had kept the police and the Office of Public Order busy. Now, in the most dangerous situation Germany has seen since the pandemic started, with a dangerous Corona mutation which is infecting more and more people in the ongoing third wave, this is a matter of life and death. The latter applies even more than before. Still, this issue will likely continue to appear, depending on the weather. For this reason, some federal states have put in place nightly curfews. Up to now, the city state of Berlin has refrained from taking this step.

Additional officers would be on duty over the Easter holidays, in order to check the situation at Berlin’s parks, the Police Department announced.