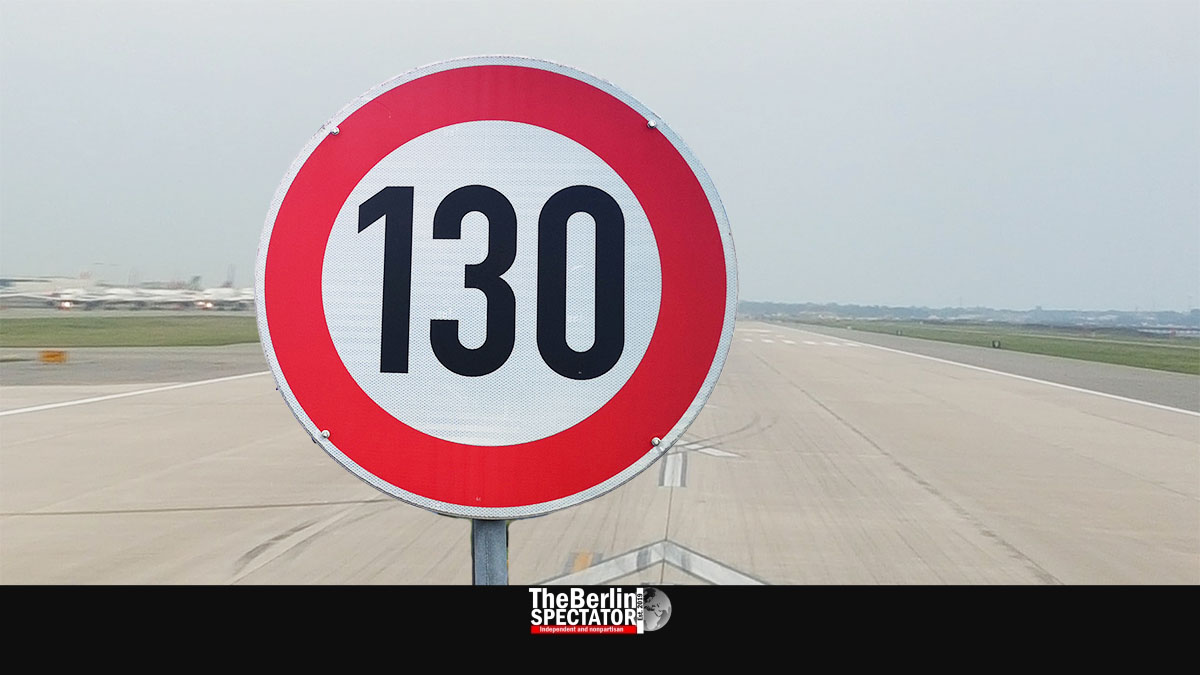 The new airport for the Berlin Brandenburg region, known as BER, now has a speed limit on both of its runways. According to the management, the step became necessary because too many pilots were constantly speeding. From now on, violations will be expensive.

Berlin, April 1st, 2021 (The Berlin Spectator) — At BER Airport in Brandenburg, located just south of Berlin, things are changing. The operator, FBB, just put in place a speed limit of 130 km/h (81 mph) on both runways. The rule applies to both landing and departing aircraft, the management says. Speeding would be fined, BER’s director Richard Boeing stated. Each km/h above the limit will cost 800 Euro (953 U.S. Dollars or 637 Pounds Sterling).

“Enough is enough”, Boeing told the press in Berlin. “We have told them to take off and land responsibly. But those hotshots thought they knew better. Look who is laughing now.” If the airlines insisted on sending pilots who were still in puberty and had the inner urge to race, they would have to pay. “Taking off slowly will make flying a whole new experience”, Boeing promised.

Lufthansa already reacted. The company released a statement which said it welcomed the step taken at BER Airport. “That way, we will save a lot of kerosene”, Lufthansa’s CEO Christian Tupolev stated. “The fact that nobody else has thought of this before is surprising.” Tupolev had been expected at BER Airport this morning, for the inauguration of the brand new speed limit signs on the two runways. But he missed it because his train ran into a “delay in the operating procedure”.

CEOs of airports around the world took part in the ceremony, including Jane McDonnell-Douglas from Dulles, John Tristar from LAX, Fred Cessna from Ronald Reagan Washington National Airport and Judy Embraer from Heathrow Airport. All guests landed at Leipzig Airport and were taken to BER by car, except for Mark Bombardier from Atlanta Airport. His Boeing 777-200ER landed on BER Airport’s runway 25L at a speed of 289 km/h (180 mph). He used his Visa Platinum card to pay the fine immediately. It was 127,200 Euro (152,055 Dollars or 109,329 pounds).

The new speed limit on BER’s runways was criticized by unions and other pilots’ organizations. “Are these people nuts?”, a representative of the association ‘Cockpit’ asked. He said the question had been rhetorical. “They should have taken it down to 90 km/h (56 mph)”, to save even more jet fuel.

In the meantime, all flights at BER airport were cancelled today. Nobody knew why. The only plane that took off was Mr. Bombardier’s Triple Seven. The moment its last wheel detached from the runway, the jet had a speed of 316 km/h (196 mph). This time, the fine was 148,800 Euro (177,937 Dollars or 127,797 Pounds). The plane turned around and landed again, to let Bombardier pay the fine.

BER Airport’s approach might spread across all of Germany. Frankfurt Airport, the country’s biggest airline hub, announced it would follow the example starting next week. Munich’s Franz Josef Strauss Airport intends to wait until the year 2800.

In the meantime, Germany’s aviation authority introduced new aviation rules. Effective immediately, the consumption of cocktails in cockpits is forbidden, with the exception of ‘Raspberry Mojitos’ and ‘Peach Coolers’. Both of them are alcohol-, gluten-, sugar- and Viagra-free.