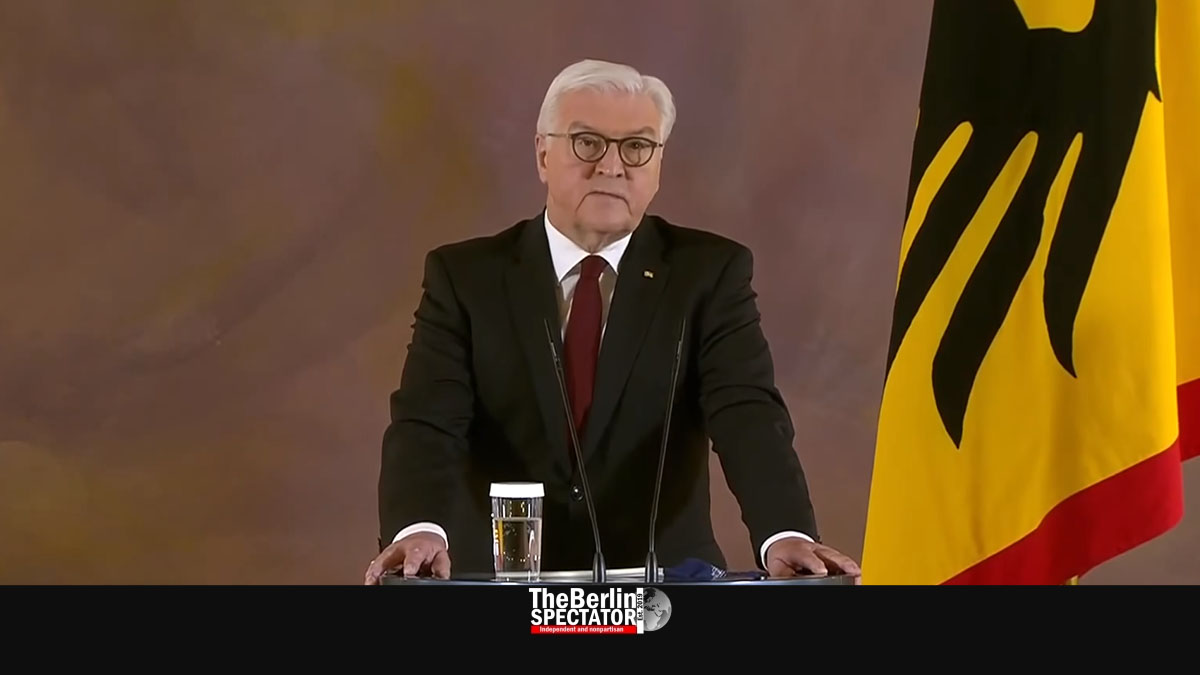 In a speech to the nation, Germany’s President Frank-Walter Steinmeier criticized both the government and the constant doom-mongering among people. He asked the country to pull itself together.

Berlin, April 3rd, 2021 (The Berlin Spectator) — On Saturday evening, a speech to the nation by President Frank-Walter Steinmeier was going to be aired on several television channels. It was pre-recorded on Friday. Steinmeier called on the government to come up with comprehensible, pragmatic rules in the fight against the Corona pandemic. After thirteen months of Corona, calls for perseverance alone did not suffice, he stated.

The President conceded there was a crisis of confidence. Besides, mistakes in regard to the testing, the vaccinations and the digitization had been made. Those calls for perseverance sounded edgeless by now. Steinmeier said neither the federal government and federal states, nor the parties, coalitions or polls should play the leading part. “We need clarity and decisiveness”, the President stated. People needed orientation. That way, Germany could show what it was made of again.

This was the time for a major effort against Corona. Complaining about others or the government all the time was not useful, Steinmeier said. “We should not be concentrating on what we cannot do, but on what we can do if we all contribute.” According to the President, the Corona pandemic is holding the mirror to Germany. Its people always wanted to regulate everything. At the same time, there was fear of risks and responsibility was constantly being moved back and forth. But the main thing was to “break the third Corona wave”.

Frank-Walter Steinmeier told Germany’s leading politicians to patch things up. And he asked the people for confidence in democracy, which meant “confiding in ourselves”. There would be “harsh restrictions” in the coming weeks, the President told the nation. It was unclear whether he meant a new, stricter lockdown of the kind Chancellor Angela Merkel wants, or if he was just talking about a continuation of today’s situation. He conceded the “way out of the pandemic” was longer than people had hoped. But many neighboring countries had been hit by Corona a lot harder than Germany.

According to Steinmeier, Germany is neither the “world champion of pandemics”, nor a total dead loss. “We have a lot of doubts, but we are also good at many things. Now, everything depends on what we are good at.”

Angela Merkel talked about Corona as well, in her weekly podcast. There were “two tangible helpers” by now. Both the Corona tests and the vaccinations would contribute to ending the pandemic. The month of April would bring a lot of headway in regard to the vaccinations, the Chancellor predicted, because the vaccine deliveries were increasing. After Easter, GPs would be able to vaccinate their patients.

According to the Robert Koch Institute in Berlin, the number of new Corona infections within 24 hours is 18,129, some 2,000 less than last Saturday. Germany’s Incidence Number decreased slightly, to 131.4.