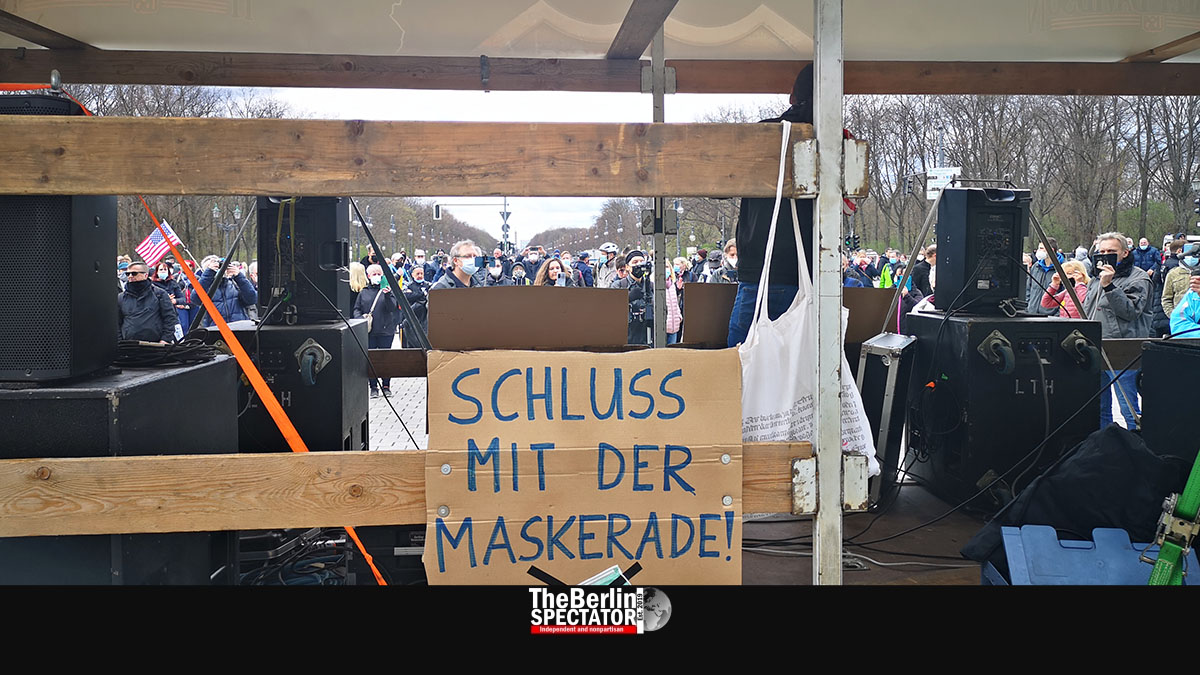 Berlin was rather quiet on Saturday. A protest staged by Corona deniers and an ‘Easter March’ dominated by communists were two of several exceptions, while the weather resolved the issue with illegal parties in parks.

Berlin, April 4th, 2021 (The Berlin Spectator) — Berlin was a quiet city during the first part of the Easter vacation, but there were a few locations at which the tranquility was interrupted. At Brandenburg Gate, Corona deniers staged yet another protest. “Our freedom is at risk”, a speaker said. “Distancing and masks are moronism.” In front of some 70 protesters, another speaker said the people needed to rise up against the government and the “alleged pandemic”.

Police officers on site kept on reminding participants to wear their masks and keep their distance. In advance, they were told adhering to the rules was a condition for the rally to take place. It would have been ended quickly otherwise. Since the Corona crisis commenced some 14 months ago, Corona deniers have staged countless protests, including large ones. In many cases, they teamed up with Nazis.

About a mile from Brandenburg Gate, at Rosa Luxemburg Square, an ‘Easter March’ took place. This traditional name used to stand for peace protests and rallies against nuclear missiles in the West Germany of the 1980s. On Saturday, the event was dominated by communist and other far-left groups and parties, including the DKP and the MLPD. Here, participants demanded a “disbanding of NATO”, an end to “all NATO wars”, a “policy of détente with Russia” and an end to an alleged “war mongering in the press”. Some more moderate participants may have been there as well.

Other than that, Berlin was rather tranquil. In spite of the fact that people had been asked not to travel, many Berliners seem to have left the city. All of the sudden, there were lots of free parking spots all over the German capital. On Saturday, some couples, families and dog owners were on the move in the rather cold wind that blew through the streets of Berlin. They walked around in the government quarter, along the Spree river and at other locations in Berlin’s two city centers. Street traffic was harmless.

Since Friday, Berlin has new contact restrictions. Between 9:00 p.m. and 5:00 a.m., people may be outside alone or in pairs. This new rule is supposed to resolve the problem posed by illegal gatherings and parties in parks which resurfaced during two warm, spring-like days Berlin experienced until Thursday. Now that the cold and the wind are back, hardly anyone feels like partying outside anyway.

The police are watching the situation. According to the Berlin Police Department, additional officers are on duty. Their task is to make sure the Corona rules are being adhered to.

In Stuttgart, where more than 10,000 Corona deniers protested against the Corona restrictions on Saturday, the situation was very different. In spite of the fact that most participants did not wear masks and did not keep their distance, the police did not intervene. This decision is being criticized now.