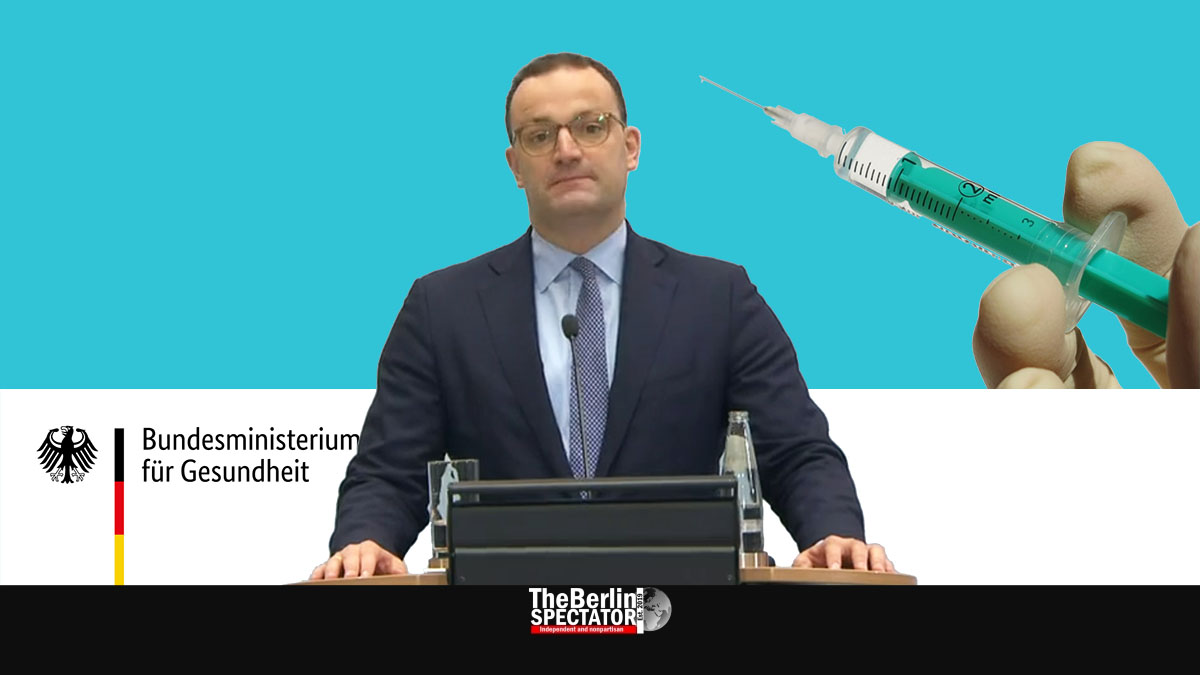 Germany’s Health Minister Jens Spahn announced, individuals who had been vaccinated against Corona could expect more liberties. Soon, they would not need tests or quarantines anymore.

Berlin, April 4th, 2021 (The Berlin Spectator) — According to Minister Jens Spahn, persons who have been vaccinated against Corona will not need to go into quarantine anymore. Within a few weeks, they would not need appointments or tests before entering shops or other businesses either, Spahn told the ‘Bild am Sonntag’ daily. According to him, a rule of this kind will be put in place once the third Corona wave was broken, and as soon as there is a “rapid Corona test system” for retail businesses.

This new approach the government will be taking is connected to new insights the Robert Koch Institute in Berlin described in an internal report. According to the latter, the risk of transmittal of the Coronavirus by individuals who have received both vaccine doses is lower than by persons without symptoms who got a negative result in rapid antigen tests. So far, the same restrictions apply to vaccinated persons and individuals who have not been vaccinated.

Spahn’s colleague Horst Seehofer, Germany’s Interior Minister, sees the need for a federal Corona law. He told the ‘Welt am Sonntag’ publication, the different Corona approaches Germany’s federal states were taking had led to discontent. The people wanted uniform rules, Seehofer told the publication. According to him, the federal law would need to say exactly which steps need to be followed at what Incidence level.

A federal law of this kind would get rid of a big problem: At Corona conferences, Chancellor Angela Merkel and the First Ministers keep on taking decisions about measures against Corona, but many federal states do not really implement them. For instance, Mrs. Merkel insists the “emergency brake” needs to be pulled in states in which the Incidence exceeds 100, but most First Ministers refuse to do so, even though they approved the rule the Chancellor wants them to implement.

Seehofer said a federal Corona law could be approved by both the Berlin Bundestag and the Bundesrat quickly. He also criticized First Ministers who refuse to play ball. Polls suggest that a majority of citizens want uniform Corona rules that apply in all states, from Schleswig-Holstein and Mecklenburg-Hither Pomerania all the way down to Bavaria and Baden-Württemberg.

The Corona infection numbers the Robert Koch Institute (RKI) released on Easter Sunday are lower than those published before Easter. According to the Institute, this has to do with the fact that less people go to the doctor on holidays. At the same time, less people are having themselves tested and the local health authorities do not report all cases. The official number of new Corona cases in Germany in the past 24 hours is 12,196. The Incidence Number for Germany dropped down to 127.0.

Top 10 Double Pack: The Best and Weirdest Aspects About Germany