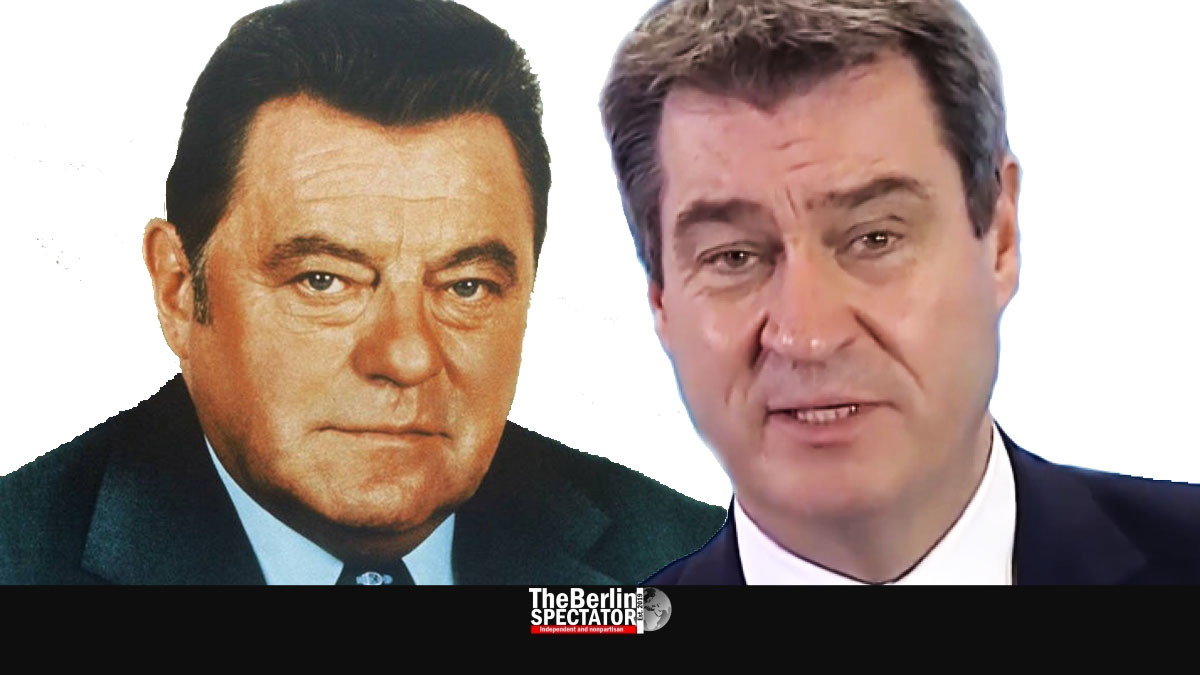 In 1980, Franz Josef Strauss, the late chairman of the CSU, became candidate for Chancellor for the conservative ‘Union’. In order to get there, he blackmailed his friends in Bonn. Forty-one years later, it will likely be the CSU’s turn again. No blackmail is necessary or intended this time.

Berlin, April 6th, 2021 (The Berlin Spectator) — In 1980, the world was different. The Rubik’s Cube puzzle toy was introduced, John Lennon was shot to death, Ted Turner’s project CNN went on the air and Jimmy Carter was U.S. President. The Cold War was at its peak. In West Germany, 1980 was an election year. A candidate by the name of Franz Josef Strauss was sent into the race by the conservative sister parties CDU and CSU also known as the ‘Union’. This happened in spite of many scandals Strauss had been responsible for. So, how did he even become the candidate? He blackmailed his friends. At the same time, he was a chess piece that was taken off the board.

In 1956, bribes were allegedly paid to the CDU and an aide of Defense Minister Franz-Josef Strauss in connection with the purchase of an armored personnel carrier that existed on the drawing table only. The key word here is ‘allegedly’. An investigation committee never managed to substantiate the allegations. Then, just two years later, the same accusations were being made. This time, it was about the Starfighter jet. Strauss ordered 700 of those aircraft which kept on crashing. Corruption claims in connection with the “widow maker” were never proven.

Later, in the early 1960s, Strauss was accused of favoring a friend and a relative in big deals. But, again, no wrongdoing on the part of the Federal Minister could be proven. This changed in 1962, when the Defense Minister triggered a scandal that went down in history as the ‘Spiegel Affair’. Strauss lied to the Bonn Bundestag. As a result, he had to step down and return to where he had come from, namely Bavaria.

But Strauss would not have been Strauss if he had not gone for the big position in spite of it all. Ahead of the 1980 elections for the Bundestag, he threatened chairman Helmut Kohl’s CDU. Strauss told his friends in Bonn he would establish its Bavarian sister party CSU to the right of the CDU in all of Germany if they refused to make him candidate for Chancellor. In spite of all those scandals he had disqualified himself with, and even though Strauss was a polarizing figure and a man who usually did more damage than good, the blackmail worked. In 1980, his mission was to defeat the Social-Democratic (SPD) Chancellor Helmut Schmidt.

“This man cannot control himself”, Schmidt said about Strauss, at the Bonn Bundestag back then. “For that reason, he cannot be put in a position in which he would control the Federal Republic”. Even quite a few conservatives agreed. But, as much as he was hated by his opponents, both in the conservative ‘Union’ parties and by the entire left, Strauss was loved by his supporters. One of them was a Bavarian teenager who was too young to vote and who had hung Strauss posters all over his bedroom. His name was Markus Söder.

Within the CDU, one of Strauss’ opponents, party chairman Helmut Kohl, a man Strauss did not take seriously because of his rather stiff personality, sat back, relaxed and watched the show. According to people who were close to Kohl at the time, he basically burned Strauss by letting him become candidate for Chancellor. Kohl predicted Strauss’ dream would not come true, but that his own would, a few years later. And he was right. Helmut Kohl ruled West Germany and reunited Germany for sixteen years, just as long as his former Environment Minister Angela Merkel will have reigned when she leaves office later this year.

The Strauss story and the one which might unfold now have a few things in common. In both cases, it is about a candidacy for a chairman of the CSU. In both cases, disqualification plays a role, but in very different ways. Besides, Markus Söder is a Strauss fan. This applies even today, 41 years after Kohl burned Söder’s idol in the elections of 1980. But, of course, there are more differences than similarities.

Today, the world is different. It is being dominated by a pandemic the world is trying to get rid of. In a crisis of this kind, politicians have the opportunity to show what they are made of — and what they are not made of. The field of potential candidates for Chancellor from within the ‘Union’ parties is down to two persons, namely CSU chairman Markus Söder and his CDU colleague Armin Laschet.

As much as Strauss had disqualified himself in the years leading up the 1980 elections, Laschet did in the past 14 months of Corona. Even leading CDU members agree. They are ready to let Markus Söder go for it, for several reasons. First of all, the polls give the German conservatives better chances with Söder as their candidate. Since the ‘Union’ just dropped a lot in the same polls, CDU and CSU do not want to experiment.

Another piece of the truth is that Armin Laschet basically disqualified himself. The man has won elections in his state, he defeated his opponents in the recent election for chairman of his party, and he is likable, maybe even more than Söder. On top of it all, the CDU is much larger than the CSU. Therefore it has the right to choose the candidate for Chancellor. The flip side of the coin is that Laschet changes his opinion almost as frequently as people are supposed to change their underwear. Also he tends to be a little too theatrical. And he does not seem to want to implement his own decisions. Several times in this crisis, he has come across as frantic and unbridled.

Within the next one and a half months, the decision is supposed to be taken. Söder’s chances are increasing. He would be the first CSU candidate to run for Chancellor since Franz Josef Strauss did in 1980. But he has not caused the kind of scandals his idol did. Actually, the only scandal is the fact that Söder still admires Strauss, in spite of all of those scandals. Söder has also changed his approach a few times, especially in the pre-Corona world. But many trust him. Söder might pull more voters from both the right and the center. As a personality, he convinces. As opposed to Laschet, he always delivers good performances in front of cameras. If the ‘Union’ wants to get back into the winning zone, it needs Söder.