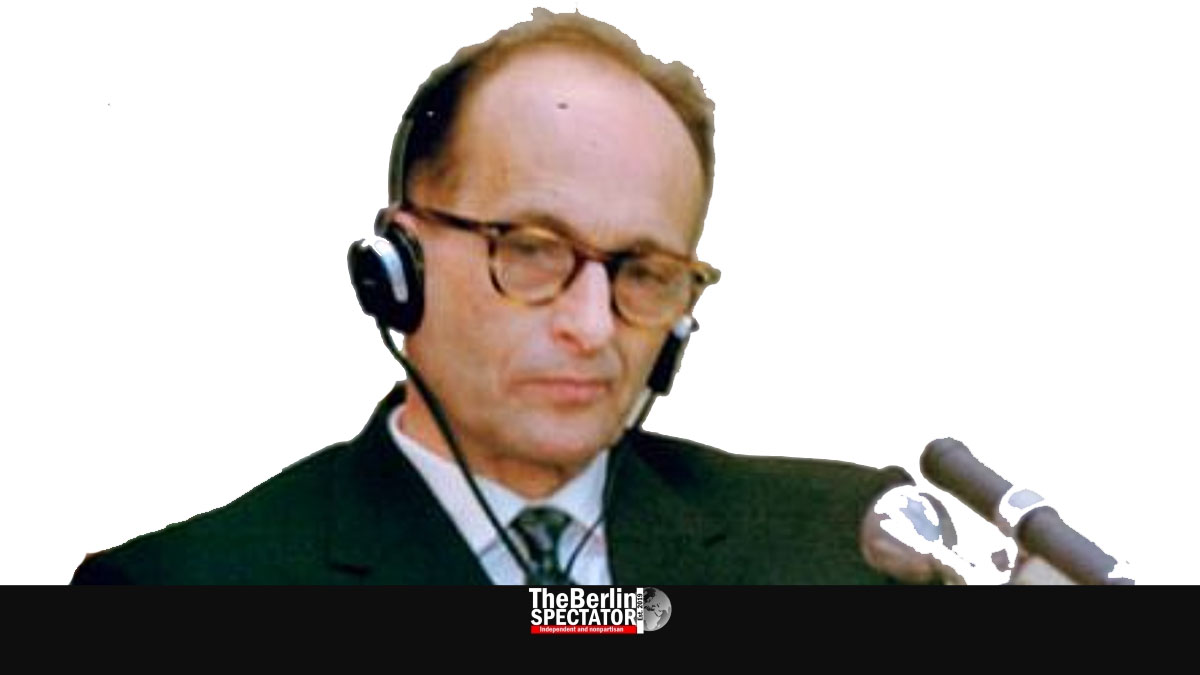 The Eichmann case is directly connected to the darkest chapter in the history of Germany and of mankind. Sixty years ago, the young state of Israel brought the ‘architect of the Holocaust’ to justice, in spite of Bonn’s efforts to prevent countries from doing so.

Berlin, April 8th, 2021 (The Berlin Spectator) — Adolf Eichmann, who was born in Solingen in 1906, moved to the Austrian city of Linz with his family in 1914. The first part of his career was not successful at all. He left school without a degree. His apprenticeship as a mechanic ended without any certificate. But there was something he developed interest for after all, namely the Nazi movement. He became part of the Austrian version of the NSDAP, the Nazi party, in 1932. In Bavaria, he was trained by Hitler’s notorious ‘Schutzstaffel’ (SS, ‘Security Squadron’) in 1933.

From Expulsion to Murder

His activities with the Nazis paid off for Adolf Eichmann. In 1935, he became part of the SS’ ‘Jews department’. While he was climbing up the ladder, his task was to expel the Jews from Austria. Because the staunch antisemite was so successful at what he was doing, he was ordered to do the same in other countries, including Hungary. Later, it was not about expelling Jews anymore, but about murdering them.

Lieutenant Colonel Adolf Eichmann was part of the Wannsee Conference, during which the “Final Solution to the Jewish question”, one of the worst genocide campaigns ever, was discussed and approved. Deporting the European Jews, millions of them, to Nazi Germany’s death camps, where they would be murdered, was his responsibility. The job made him the ‘architect of the Holocaust’. Once Nazi Germany was finally defeated by the Allies, Eichmann was one of the most wanted Nazi war criminals.

He became a POW held by the U.S. Army, but the Americans did not know who he was, also because he used a false name. All they knew was that he had been an SS officer. Eichmann managed to flee from a POW camp and hid in the woods in north-western Germany, close to Hamburg, where he worked as a lumberjack. In 1950, he managed to emigrate to Argentina, with help from a priest at the Vatican and others. From now on, Eichmann called himself Ricardo Klement.

The spectacular story about how the Mossad managed to capture him in Argentina and take him to Jerusalem in 1960 was even turned into several movies. It would not have happened if Fritz Bauer, the Prosecutor General in West Germany’s federal state of Hesse, had not notified the Israelis once he got information about the whereabouts of Adolf Eichmann directly from Argentina. Bauer, a non-practicing Jew, did not trust the federal government in this case.

As it turned out much later, Bauer’s hunch was right. From 1952, the government of the Federal Republic of Germany’s first Chancellor Konrad Adenauer knew Adolf Eichmann was in Argentina, and which alias he was using. This important piece of information was part of CIA documents that were declassified in 2006. Back then, 15 years ago, the world learned that the Adenauer government passed on the information to the Americans, but asked them not to arrest Eichmann, in spite of it all. There is another scandalous aspect: The United States followed the request from Bonn, meaning they did not do anything.

Once Eichmann finally was behind bars in Jerusalem in 1960, Israel prepared for the trial. It begann exactly 60 years ago, on April 11th, 1961. As witnesses, countless Holocaust survivors told the court about the most gruesome crimes ever committed by anyone. All of those were connected to Adolf Eichmann. In December of 1961, he was sentenced to death. Three days after the death sentence was confirmed by the Israeli Appeals Court, on June 1st, 1962, Adolf Eichmann became the first and only person ever to be executed by Israel.

Of course, the Federal Republic of Germany’s role in the Eichmann case is more than inglorious. West Germany’s government was afraid. Chancellor Adenauer’s State Secretary Hans Globke was supposed to be protected, also because he had co-written a non-critical comment on the Nuremberg Laws in Nazi Germany, and Bonn was afraid Eichmann might talk. The West German government also feared a loss of prestige for the Federal Republic, and rightly so. To the opinion of many, the way the Eichmann case was handled by West Germany in the 1950s was despicable.