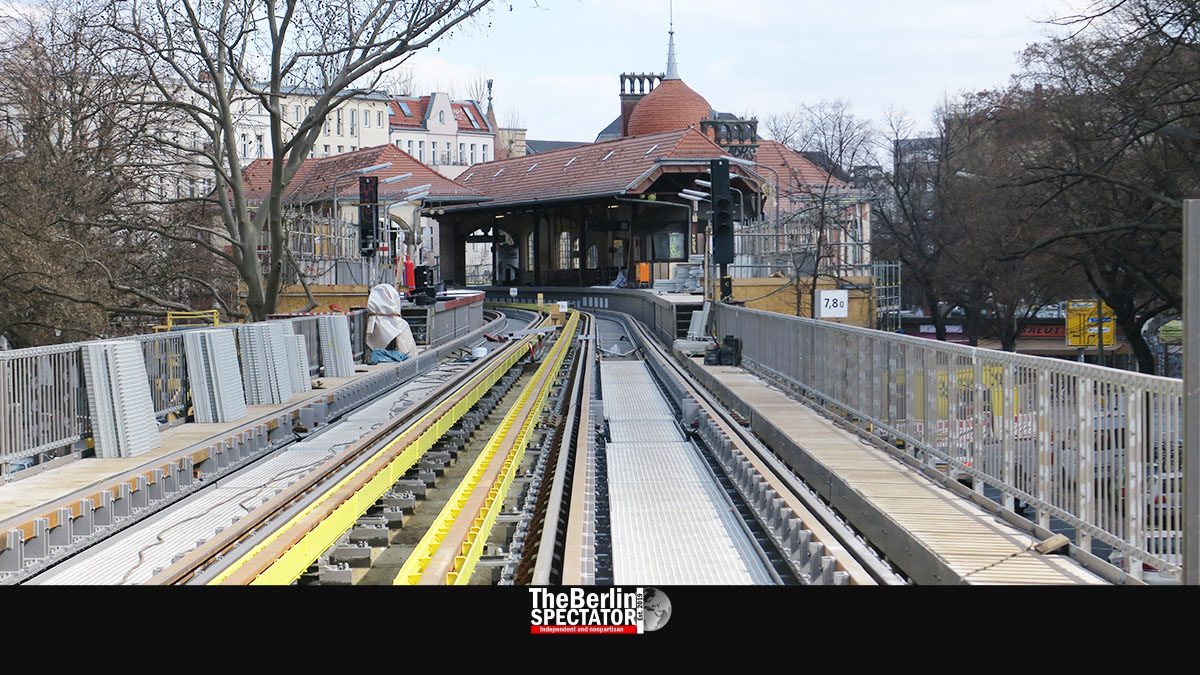 In Berlin, the U-Bahn train lines U1 and U3 are back in business. It took the public transport provider BVG a year to renovate an overhead railway that connects the German capital’s Kreuzberg and Friedrichshain boroughs.

Berlin, April 8th, 2021 (The Berlin Spectator) — Kreuzberg and Friedrichshain used to be parts of different states. Friedrichshain belonged to East Berlin, the capital of the communist GDR, while Kreuzberg was located in West Berlin, West Germany’s enclave which was surrounded by the Berlin Wall. Today, they are both part of one and the same district. The Wall is gone, but the Spree river still exists. Nobody has sucked it dry. That is why Kreuzberg and Friedrichshain, a borough the name of which foreigners can hardly pronounce, are connected by bridges.

One of the most famous bridges in Berlin is Oberbaumbrücke. It is being crossed by thousands of pedestrians, cyclists and motorists every day, and by the U-Bahn, which is Germany’s version of what other countries call metro, tube, underground or subway. So, if the ‘U-Bahn’ is the underground, why in the hell would it move back and forth on an elevated railway viaduct? Good question. It was easier to construct it this way.

Around Friedrichstrasse, the elevated railway concept promoted by the late inventor Werner Siemens was rejected in the late 19th century. But, for the stretch between Warschauer Brücke and Hallesches Tor, the idea ‘inherited’ from New York City was implemented. From Gleisdreieck to Uhlandstrasse in Berlin’s former western city center, the U-Bahn is what is usually is: a subway that operates where the sun does not shine, where all the rats live. As opposed to all other U-Bahn lines in Berlin, the U1 and the U3, both of which use the viaduct, are narrow. This applies to the tracks and the wagons.

Now, the renovation project on the oldest U-Bahn route in Germany, which annoyed residents on Skalitzer Strasse and disrupted traffic a lot, was finally completed. On Monday, April 12th, 2021, the U1 and U3 will be operational again on this long stretch. No replacement transport will be necessary anymore and the construction noise will be gone. There is one exception: For now, Schlesisches Tor station will only be used in the western direction towards the city center. According to the BVG, it is supposed to be ready to rumble on April 22nd, ten days later.

One thing is certain: The construction workers were very busy indeed. For instance, the steel structure of the viaduct needed to be refurbished, a concrete surface was applied up there and the viaduct’s pillars needed additional fundaments. Was this all? No. Two new switches were part of the project. So were blanket insulators that are supposed to decrease the noise the trains create, and railroad ties made of synthetic. In total, 2.2 kilometers (1.4 miles) of train tracks, 1.4 kilometers (0.9 miles) of power rails and truckloads of gravel were replaced, not to mention a gazillion cables. On top of it all, an anticorrosive coating needed to be applied.

“With the recommissioning of the overhead railway, the stretch between Gleisdreieck and Oberbaumbrücke is ready to go for the next decades”, Uwe Kutscher, the BVG’s head of construction projects, promised. He stated he was glad the budget for the renovation had not been exceeded. The renovation project swallowed some 36 million Euro (42.7 million U.S. Dollars or 31.1 million Pounds Sterling).