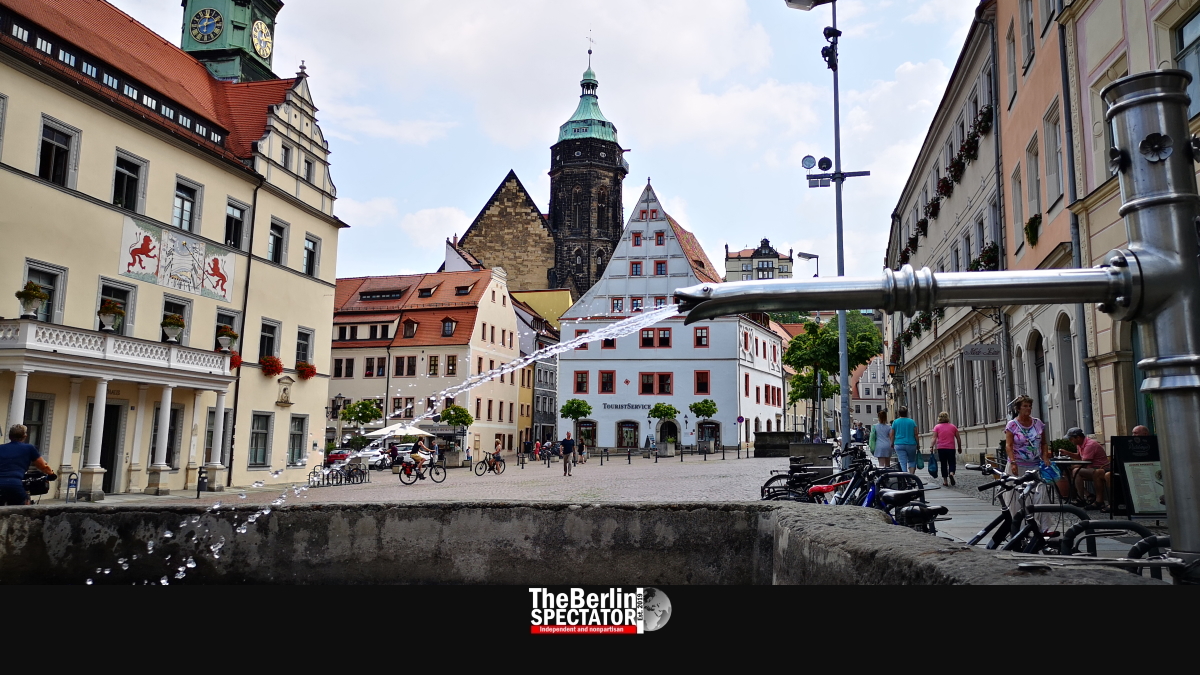 Located in south-eastern Saxony, close to the Czech and Polish borders, Pirna is at least 780 years old. Its medieval buildings, including the ‘Sunshine Palace’ and narrow alleys, make it one of the most beautiful towns in the province and the entire country.

Berlin, March 16th, 2020. Update: April 9th, 2021 (The Berlin Spectator) — When Merten Heynemann rented a studio at ‘Dohnaische Strasse’ in Pirna exactly 557 years ago, he probably knew why. The man they called “the beauteous tailor” must have paid a rather high rent. In return, he got a spot on the elegant main shopping street in Pirna. And the Elbe river was only a few steps away.

Today, ‘Dohnaische Strasse’ does not look very different. The medieval houses lined up there accommodate shops and restaurants, including the ‘Arme Sau’ (‘Poor Sod’). It is still the nicest shopping street ever, more than five centuries later. Because travelling is so much easier today, and because of its unmatched beauty, lots of tourists invade Pirna.

In 1463, when tailor Heynemann was active, Pirna was already 230 years old. The town was mentioned in a certificate in the year 1233. Another 36 years later, in 1269, the fortress of Pirna was first written about. Erected from 1545 to 1548, ‘Schloss Sonnenschein’ (‘Sunshine Palace’) is the building that stands at the fortress’ location, on a hill overlooking Pirna. It is one of the many tourist magnets in town.

In Pirna, 40 percent voted for Hitler’s Nazi party NSDAP in the 1933 general elections. Germany’s darkest period followed. Books were burned right in the town’s center. In 1940 and 1941, 13,720 mentally ill people and 1000 inmates of concentration camps were murdered in Pirna. In spite of this terrible event in history, about one in five residents voted for the extremist right-wing AfD in the town hall elections of 2019. In Saxony’s state elections, even one in three inhabitants of Pirna voted for those radicals.

After the war, the next bad period came: communism. The GDR’s regime had dozens of those typical socialist apartment blocks built in the outskirts. At the same time, the medieval heritage, meaning those historic buildings Pirna is full of, were neglected and fell apart.

Walking through Pirna today is a nice experience. So is trying the town’s culinary treasures. The market place in the center offers stunning views of ‘Sunshine Palace’. At the same time, the palace up on that hill provides just as wonderful perspectives of the town. Climbing up those stairs is mandatory.

In comparison, the port in Pirna is tiny and cute. It has one ferry and one tourist boat. Instead of a never ending concrete wharf, beautiful flowers garnish the riverside. It is truly nice down here. The view of Pirna from the other side of the river is priceless too.

A trip to Pirna can and should be combined with other Saxon marvels, including Görlitz and Meissen (Meißen), but also Dresden and Leipzig. It goes without saying that tourism at the peak of the third Corona wave is not recommended, and that restaurants and most shops are either closed or working in Corona mode, with several restrictions.