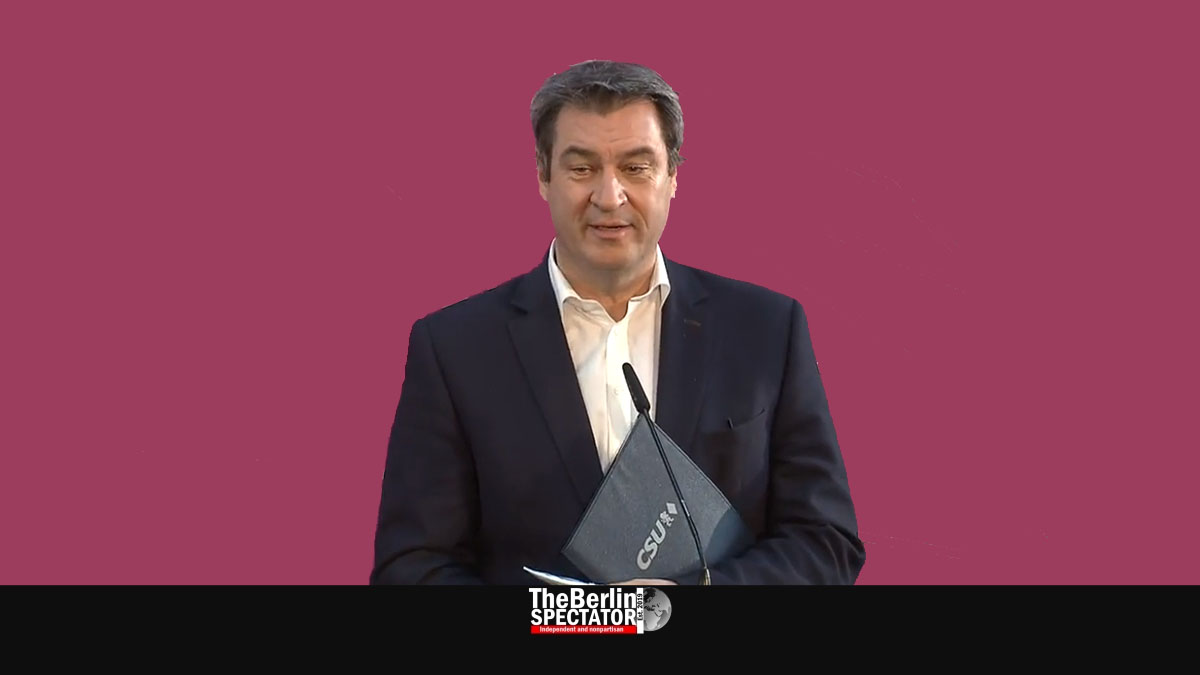 In Berlin, Markus Söder told the participants of a meeting of the ‘Union’ parties’ Bundestag fractions, he would be willing to become candidate for Chancellor, if the CDU supports him. It was the first time he said so directly.

Berlin, April 11th, 2021 (The Berlin Spectator) — Germany’s conservatives officially have two potential candidates for Chancellor. Soon, they intend to pick one of them. In the media, Markus Söder, the chairman of the CSU and First Minister of Bavaria, has been named as a possible contender for years. But, until today, he has never said he wanted to become the candidate, at least not directly. Armin Laschet, Söder’s colleague in North Rhine-Westphalia, recently became chairman of the CDU after a tight race between three candidates. This position automatically makes him a possible candidate.

At this stage, Laschet is dropping in the polls, along with his entire party. Even in his own state, the number of voices who say Söder should become candidate for Chancellor instead of Laschet, is increasing. On the other hand, both parties and both potential candidates know polls change all the time. In five and a half months, when Germany’s Bundestag elections take place, they will definitely have changed, at least at some degree.

At a press conference in Berlin, Markus Söder said this was all about defeating the Greens in a race about becoming “the number one” and taking the chancellery. The approach to take included three main aspects: It was important to represent the spirit of the times, and to have a modern party program which should neither announce more of the same, nor a return to the past. The program needed to come up with new answers to new challenges. Thirdly, the personell was important.

Suitable for the Job

Söder stated he and Armin Laschet had had a long conversation about a big array of questions, including the candidacy. They had come to the conclusion that both wanted to become candidate for Chancellor and that both were suitable for the job. He stressed that the conservation had been amicable. “We are not Helmut Kohl and Franz-Josef Strauss”, Söder said. He was referring to two late leaders of the CDU and CSU who hated each other. The CSU’s Strauss lost the Bundestag elections of 1980 to the Social Democrats’ Helmut Schmidt. Kohl lost in 1976, but became Chancellor in 1982, when the liberal FDP switched horses.

According to Söder, there is a lot of respect between him and Laschet. “No matter what the outcome of the candidacy question will be, we will cooperate very well”, the Bavarian First Minister stated. He promised the decision would be taken sooner rather than later. “This is not about our ambitions, but about the good of the ‘Union’ parties and of Germany.”

‘We Do Not Want Division’

There was something else Markus Söder made clear: If the “big sister party”, the CDU, wanted him to be candidate, he would do it. On the other hand, if they wanted someone else, he and his CSU would accept the decision. “We do not want division”, Söder explained, “but we intend to close ranks.”