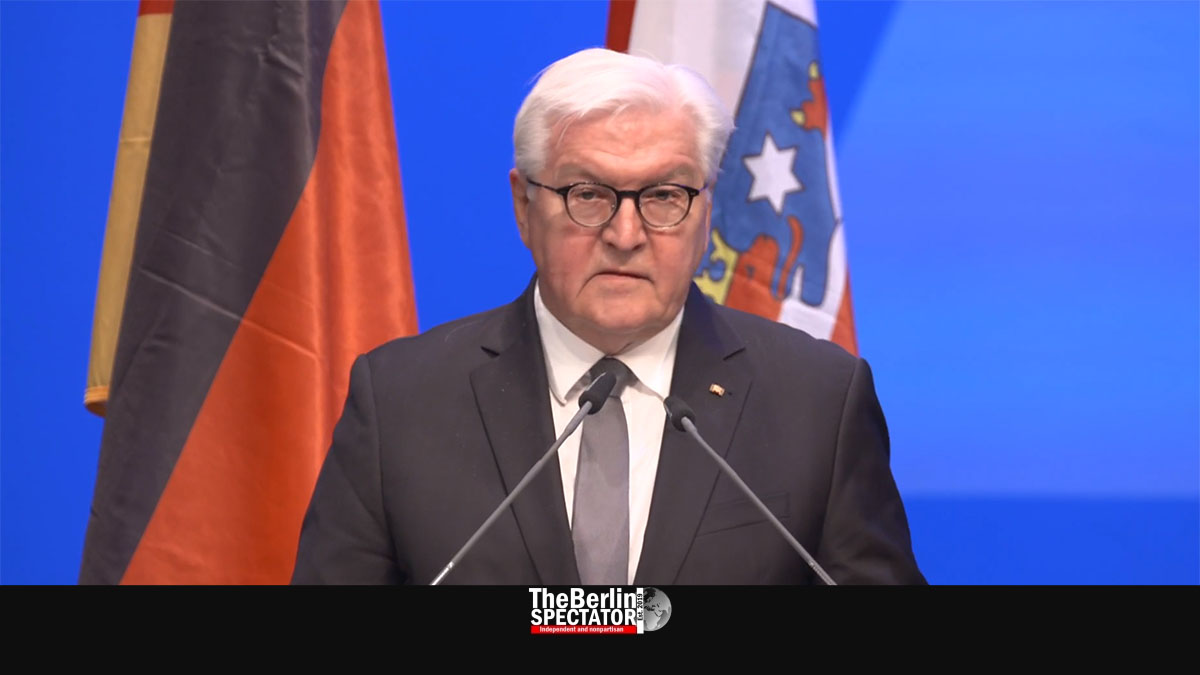 In Weimar and the nearby Buchenwald memorial site, the 76th anniversary of the liberation of the former concentration camp was observed today. Because of Corona, there were few participants. Germany’s President Frank Walter Steinmeier was among them.

Berlin, April 11th, 2021 (The Berlin Spectator) — Seventy-six years after the Americans liberated Buchenwald, President Frank Walter Steinmeier took part in an anniversary ceremony in Weimar. “In this cultural city, not having suspected anything was the pretext”, he said in front of Thuringia’s First Minister Bodo Ramelow and other participants. “The exploitation of the detainees was an integral part of the economy.” In Weimar and the region, there had been high culture and barbarism next to each other.

‘Germans Did This to Others’

“We should never forget, or want to forget. Whoever forgets what has happened does not know what can happen”, the President stated this morning. At the Buchenwald concentration camp, people from all countries occupied by Hitler’s Wehrmacht had been detained and murdered. The name Buchenwald lived on in many European families for that reason, the President said. For instance, there were mass graves in the sub-camps that were known as the largest French cemetery outside of France.

Jews, Sinti and Roma, communists, homosexuals and other people had been deported to Buchenwald. That was why Buchenwald stood for the the entire barbarism of the Nazis, including racial fanaticism, torture, murder and annihilation, Frank Walter Steinmeier said. The Nazi dictatorship had been responsible for the most gruesome crimes and genocide. “Germans did this to others. The dignity of the victims demands that we do not forget.”

‘This is Our History’

“This is our history, the history of our country. We do not want to forget it”, Steinmeier stated at the ceremony. The President thanked those who are doing research about Buchenwald and its sub-camps, and those who raise awareness on a voluntary basis. “Your work is indispensable”, he told them. “All of us who are part of humanity are responsible for making sure it never happens again”.

When the Third United States Army liberated Buchenwald on April 11th, 1945, seventy-six years ago today, some 21,000 inmates were still there. Hitler’s ‘Protection Squad’, the SS, had fled shortly before. Its members sent thousands of people on a death march just before the liberation. During the last days of the camp, the remaining inmates managed to arrest 125 SS officers.

Between 1937 and 1945, more than 50,000 persons were murdered at the Buchenwald concentration camp, which was equipped with a stationary gun. It was designed and used to shoot inmates in the back of their necks while they thought they were at a doctor’s office. While most Soviet POWs were murdered upon arrival, most other inmates were exploited as forced laborers in Nazi Germany’s arms industry. Under inhumane conditions, many of them died of diseases and malnutrition.

At first, Nazi Germany deported mostly German Jews and members of other minorities, including Jehova’s Witnesses and homosexuals, but also criminals, to Buchenwald. Later, nationals of different countries were abused and murdered there. When the Third United States Army entered the concentration camp, 95 percent of all inmates were not German.