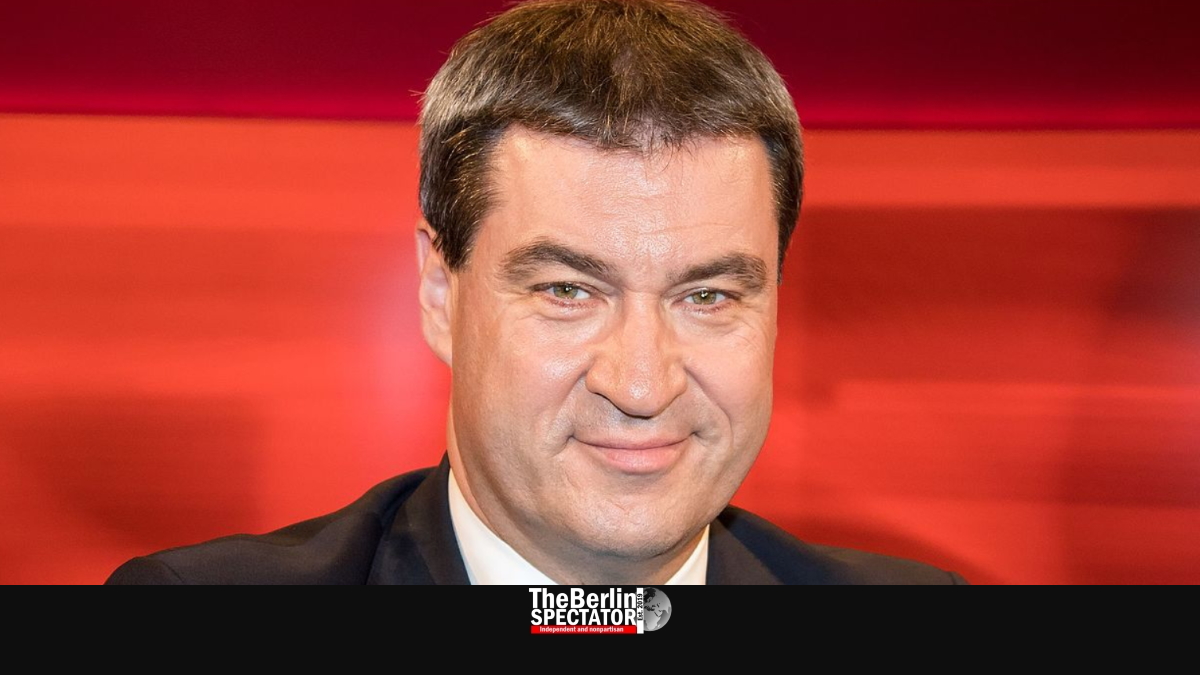 Germany’s Bundestag elections are coming up, and the conservative ‘Union’ parties have not picked their candidate for Chancellor. The decision is supposed to be taken soon. In the eyes of many, there can only be one answer to the candidate question: Markus Söder.

Berlin, April 12th, 2021 (The Berlin Spectator) — Germany’s conservative ‘Union’ parties CDU and CSU have lost a lot of support in the past weeks. Discontent with the Corona policies and a corruption scandal that hit them made them drop down by 9 to 28 percent, according to the latest polls. There is another issue: Angela Merkel’s CDU and its Bavarian sister party do not have a candidate for Chancellor yet.

There is a growing number of MPs, both in the CDU and the CSU, who openly say Markus Söder, the CSU’s chairman and First Minister of Bavaria, needed to be chosen, in order to improve the chances for a big election win. They do have a point. Polls show that Söder would do much better than the CDU’s new chairman Armin Laschet, who is also First Minister of North Rhine-Westphalia. So, why would the ‘Union’ bet on the second-best choice?

Only yesterday, years after the media started speculating about Söder’s possible candidacy, he finally said the word ‘yes’. But the decision making process has not ended. This big drama about the ‘K question’ (‘K’ as in ‘Kanzler’, the German word for Chancellor) has been dragging on forever. If it was finally settled, the conservatives and the country would be able to concentrate on the fight against Corona again.

On September 26th, 2021, the big elections will take place. The way things stand now, the Social Democrats (SPD) are not really a major party anymore, meaning they almost could have refrained from choosing a candidate for the first time since 1949. Of course they picked one anyway, in spite of the fact that they have only 16 percent right now. With Finance Minister and Vice Chancellor Olaf Scholz, they actually do have a good candidate. But his chances to be in the position to lead a government coalition are rather slim. Both the conservatives and the Greens are a lot stronger than the SPD, meaning things would have to change a lot to turn the junior coalition partner SPD into a potential senior one.

Looking at the polling numbers, the Greens have far more reason to pick a candidate for Chancellor. They will announce her next Monday. Her? Yes, their co-chairperson Annalena Baerbock has better chances than her colleague Robert Habeck. Most other parties are too weak, meaning they might conquer the chancellery in their wet dreams.

Within the ‘union’ parties, the question whether their next candidate for Chancellor should even be searched for in Berlin, or rather elsewhere, has been asked for a long time. In a city called Munich, someone with a top post in the conservative camp is now ready to go for it. Since 2019, Markus Söder had refused to answer the big question, probably because it would have been risky to commit too early.

Besides, he had just become First Minister and chairman of the CSU. There was a lot of work for him down there in Bavaria. Söder is a modernizer, which is not an easy task in a party as conservative as his. But under him, even the CSU has discovered a new species which has not really been a priority so far: the woman. Söder wants his party to be more female, and younger. Two years ago, at his first party convention as chairman, he wanted a female quota and failed. At least his beer tent folks agreed on a “recommendation” to include more women.

Back then, Söder used an interesting sentence, about two minutes into his big convention speech. “We are in a pretty good shape”, he stated. “Some even think we are capable of more than only being successful in Bavaria.” If that wasn’t a broad hint, what is? Yesterday, on April 11th, 2021, he finally became more direct, and he already laid out part of his concept. He said the approach he wanted to follow included representing the spirit of the times, having an election program that included new answers to new challenges, and choosing the right personell.

Not only does Söder know what sells. He is also a gifted salesman. In the history of German politics since 1949, there were a few gifted rhetoricians, strong personalities who would shoot any opponents down with quick-witted responses. In the SPD, the late Helmut Schmidt was someone of this kind. Former Chancellor Gerhard Schröder, who works for the Russians today, has this gift too, to a certain extent. In the conservative sister parties CDU and CSU, mainly one name comes to mind, namely Franz Josef Strauss.

Today, things are different. Hardly any high-ranking or prominent Berlin politician has those traits. The exceptions would be Gregor Gysi from The Left (‘Die Linke’). And Markus Söder. He knows how to bring his message across and how to make people smile. He has the Kennedy effect. It may not work too well in Corona times, but it did before. When he turned up and presented some rather shallow jokes in speeches, even Angela Merkel started smiling. Söder is an ice breaker, which is an important trait in a big election. Sometimes, it does not really matter what he says as long it is him who says it.

As an adolescent, he was a big admirer of Strauss, who was something like a Bavarian father figure on an overdose of Red Bull. His opponents hated, his supporters idolized him. Many still do, in spite of the fact that he was responsible for a long list of scandals which rocked the still relatively new Federal Republic of Germany in the 1950-s, 60-s and 70-s. Strauss was suspected of accepting advantage several times during his long career. But none of those accusations ever stuck. The Starfighter Scandal did hit him though, when Strauss was Defense Minister in Bonn. So did the ‘Spiegel Affair’, which was a test for the then young Western German democracy. It was caused by Strauss who had to leave Bonn and return to Bavaria as a result.

Markus Söder had a big Strauss poster on the ceiling of his bedroom when he was a teenager. “When I woke up, I looked at him”, he said in an interview, years ago. Söder did admit that it was not easy when his girlfriend spent the night with him, because she would see Strauss as well, the minute she opened her eyes in the morning.

Armed with an excellent Abitur (the equivalent of the A-Level or high-school diploma) grade, Markus Söder studied law and became a trainee at Bayerischer Rundfunk, the Bavarian division of the nationwide ARD radio and TV network, meaning he was on the other side of the microphone and the camera, decades before he became a politician. He knows how to make an impression in front of cams and mics, also because of this experience.

Early on, Söder became a member of the CSU and its youth organization, which he led for eight years. With his rhetoric gift and sharp mind, he convinced many party friends and climbed up the ladder. Soon he would be part of the CSU’s leadership and got several minister posts in Bavaria. Then, he was his party’s Secretary General, a job which gave him nationwide attention too. It was like he had the word ‘First Minister’ painted on the forehead.

It’s not like Söder was always loved by all party colleagues. Some criticized his “politics style”, others accused him of concentrating on populist subjects and on himself too much. Also he disgruntled more moderate CSU members by defending ultra-conservative positions for a while. For instance, he suggested Germany’s national anthem should be sung at schools more, because this would help with the integration of immigrants. In an interview he once suggested the crucifix should be visible at schools rather than the hijab.

During the peak of the refugee crisis in 2015, he called the fundamental right to apply for asylum into question. Just before his first election as First Minister, Söder first tried to sound at least as firm on immigration as the extremist right-wing party AfD. When he noticed this approach did more damage than good, he reversed course. His CSU then took a big hit in the elections of 2018. But he could not really be blamed, at least not alone, because of the general trend in Germany, where the very left and the very right became stronger while the big-tent parties were in trouble or even drowning, like the SPD.

Markus Söder, who is 54 years old today, reached his long-cherished goal in January of 2019. He finally got the maximum amount of power anyone can have in Bavaria. Even though the former CSU chairman, Germany’s Interior Minister Horst Seehofer and Söder himself kept on repeating they had gotten along with each other quite well, they had not. For a long time, there was some kind of a feud between the two. At times they cooperated, e.g. when they endangered Chancellor Angela Merkel’s coalition government in 2018, with their rather stubborn position on immigration. But Markus Söder finally won. When Seehofer announced he would give up his party chairman post, Söder did not even have to fight in order to become his successor. His people at the Munich state parliament asked him to take over.

Now he wants the CDU to ask him to become candidate for Chancellor. And his chances are good. Markus Söder is more convincing than Armin Laschet, he does not polarize as much as his idol Franz Josef Strauss did, he is not a sleeping pill like his CSU colleague Edmund Stoiber who tried to get into the chancellery in 2002, and he has more charisma than all other actual and possible candidates from all other parties combined.

While Söder is clearly the better choice for the ‘Union’ parties, there are some who are probably hoping he will not run. The opposition parties definitely know he would be a much tougher opponent than Laschet who could even grab some of their supporters. And many of Söder’s CSU colleagues in Munich would probably rather keep him than give him away.