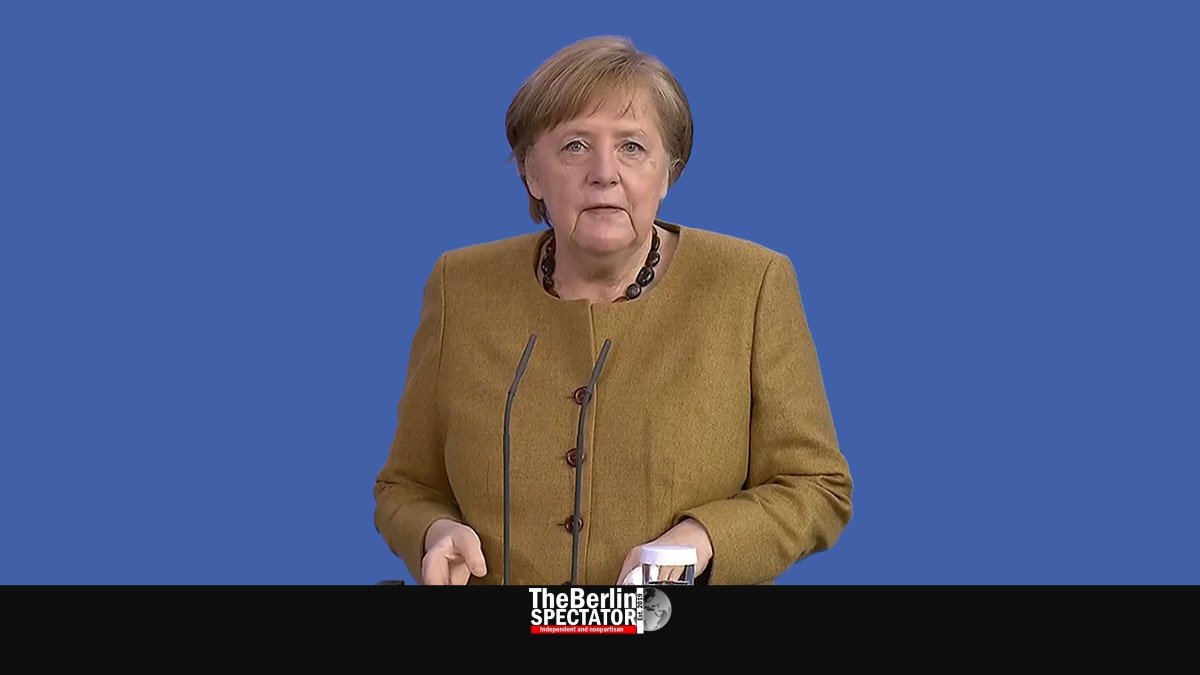 Chancellor Angela Merkel is in the process of enforcing the Corona policies in Germany’s federal states. Her weapon is the ’emergency brake’: It actually is an amendment to the Infection Protection Act.

Berlin, April 13th, 2021 (The Berlin Spectator) — “We are implementing the nationwide ’emergency brake'”, Chancellor Angela Merkel told the press in Berlin in the early afternoon. “Where the Incidence is above 100, uniform rules are supposed to apply. The ’emergency brake’ will not be a matter of interpretation anymore.” By forcing through the ‘brake’, the Chancellor took decisions out of the hands of the state governments. This applies in emergency situations like the one Germany and the better part of the world are in right now.

“The nationwide ’emergency brake’ was overdue”, Mrs. Merkel stated. “Even though it might be difficult to hear it yet again: The situation is serious, and all of us should take it seriously.” She mentioned the number of new infections, the Incidence, the reproduction number and the rising number of occupied ICU beds at Germany’s hospitals. “If we waited until all beds are full, it would be too late”, Angela Merkel said.

The following measures are part of the ’emergency brake’ which will apply in counties in which the Incidence exceeds 100 on three consecutive days:

>> Private gatherings are limited to people from one household and up to one person from another household. This includes children.

>> All non-essential shops need to close. The same applies to zoos and cultural venues of all kinds, except for drive-in cinemas. Book shops and garden centers may open along with supermarkets, pharmacies, drug stores, hairdressers and gas stations.

>> Restaurants and similar businesses may offer takeout food only.

>> Nightly curfews apply from 9:00 p.m. to 5:00 a.m.. Exceptions apply. For instance, caring for people or animals, going to work or back home from work, going to the pharmacy or the doctor in emergencies is allowed.

>> Engaging in sports activities is only allowed alone, in pairs or with members of the same household.

>> Schools and kindergartens got a special rule: They may welcome children on site up to an Incidence of 200, as long as the kids who attend are being tested for Corona twice a week. The teachers and caretakers need regular Corona tests as well.

>> Religious gatherings are exempt, and the freedom of assembly is not directly affected, for instance when it comes to protests.

When the Incidence in a county drops below 100 again, for five consecutive days, all of these measures do not apply anymore.

Since the Corona crisis started, Angela Merkel has always been in favor of listening to the leading virologists and other experts, and of running a strict Corona policy, especially during the three big waves that have swept over Germany. In the past weeks, the First Ministers in some federal states, including Merkel’s own party colleagues, had refrained from following their own decisions by reopening shops and other places in spite of the ongoing third wave.

When the Chancellor announced she would look into changing the Infection Protection Act some two weeks ago, commentators for some German-language media said this approach was not feasible, for legal reasons. Obviously, they were wrong. The Berlin Bundestag and the Bundesrat still have to approve the amendment to the law.