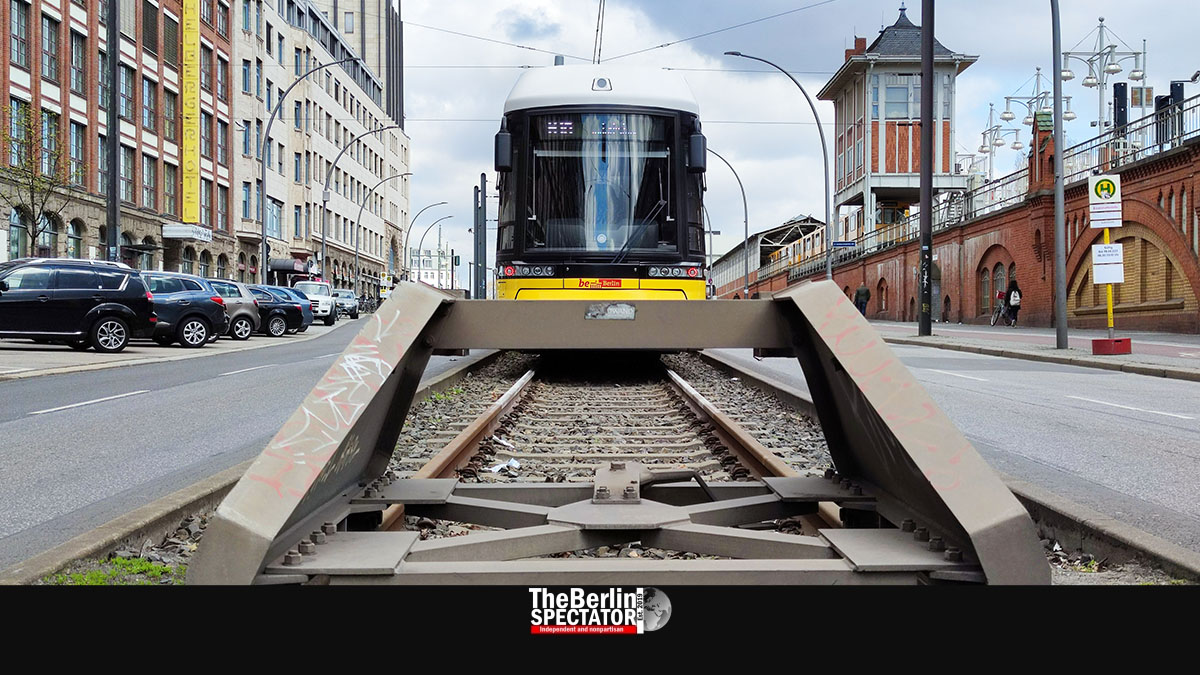 The Berlin Senate just decided to start planning an extension to tram line M10. In a few years from now, it is supposed to take passengers all the way to Hermannplatz, a chaotic square in Neukölln. Those trams will have to cross a river and a canal. Besides, their tracks will run through rather narrow urban canyons.

Berlin, April 13th, 2021 (The Berlin Spectator) — What do you do when your city of 3.8 million inhabitants is about to burst, and when all residents insist on moving back and forth all day long? What do you do when your public transport is antiquated and crammed, and when you feel you have to offer more? Well, you take a shovel and dig a new tunnel for the metro. But what if you have done so already and you need to come up with a new idea this time? Then you just plaster the city with new tram tracks. And this is exactly what the Berlin Senate decided to do today.

Your mission, should you choose to accept it, is to extend the M10 tram line. So far, it connects Berlin Central Station to Warschauer Strasse, on the north-eastern side of the Spree river. From there, it is supposed to cross the river via Oberbaumbrücke, one of Berlin’s more famous and most busy bridges. It is already being crossed by pedestrians, cyclists, motorists and the ‘U-Bahn’, Berlin’s subway, underground, tube or metro. Is there enough room on the bridge for tram tracks? No.

Once the bridge issue is resolved, the German capital’s main public transport provider BVG will have to look into squeezing 2.9 kilometers (1.8 miles) of tram tracks into rather narrow Kreuzberg streets that feature those typical Berlin apartment buildings on both sides. Their residents will not be too happy about years of construction and the constant noise trams cause. On the other hand, they might appreciate the fact that they will have improved connections once the dust settles.

The following streets will likely be affected: Falckensteinstrasse, Glogauer Strasse, Pannierstrasse and Sonnenallee. All cars will have to be kicked out of some of these streets. Crossing the infamous Görlitzer Park is the easiest part. One of the hardest ones is getting across Hermannplatz square, a chaotic spot with a gazillion bus lines, a big ‘U-Bahn’ station, lots of other traffic, weekly outdoor markets and a major department store. Whoever plans this endeavor will need some genius ideas to make this happen. Moving the entire square to neighboring Brandenburg, or to Mars, might work. At least crossing the Landwehr Canal should be easy as pie, if the tiny bridge on Glogauer Strasse is stable enough.

For the BVG, spokeswoman Petra Nelken told The Berlin Spectator, the technical part of a project of this kind was easy. But trams did require some room. She reminded this publication of the fact that Berlin always was a city of trams. It would not be the first time a tram line is installed at Hermannplatz. Now that the Senate has decided to plan the project, the next step is to look into details and to start a European tendering process.

Berlin’s Transport Senator Regine Günther is enthusiastic about the project. East and west would be connected more, she said, referring to the fact that Berlin is still in the process of growing together in this regard as well. Network gaps would be closed, also because the M10 extension would connect the tram line to the ‘U-Bahn’ lines 7 and 8, Mrs. Günther said. For Görlitzer Park, Senator Günther promised a traffic guidance that will protect the greenery there. The park would even be valorized, she stated.

The project will not come for free, and it will take quite a while until the first passengers will be taken from Warschauer Strasse to Hermannplatz on the M10, probably until the year 3000. The official version is that it will take until 2026 or 2027. Since there is no tunnel digging, this is actually rather quick. One thing is certain: Senator Regine Günther is a busy lady, also because there is yet another public transport project. The Senate just decided to extend the tram lines 12 and 27 from Weissensee to Heinersdorf as well. And she initiated both projects. It remains to be seen what is next.