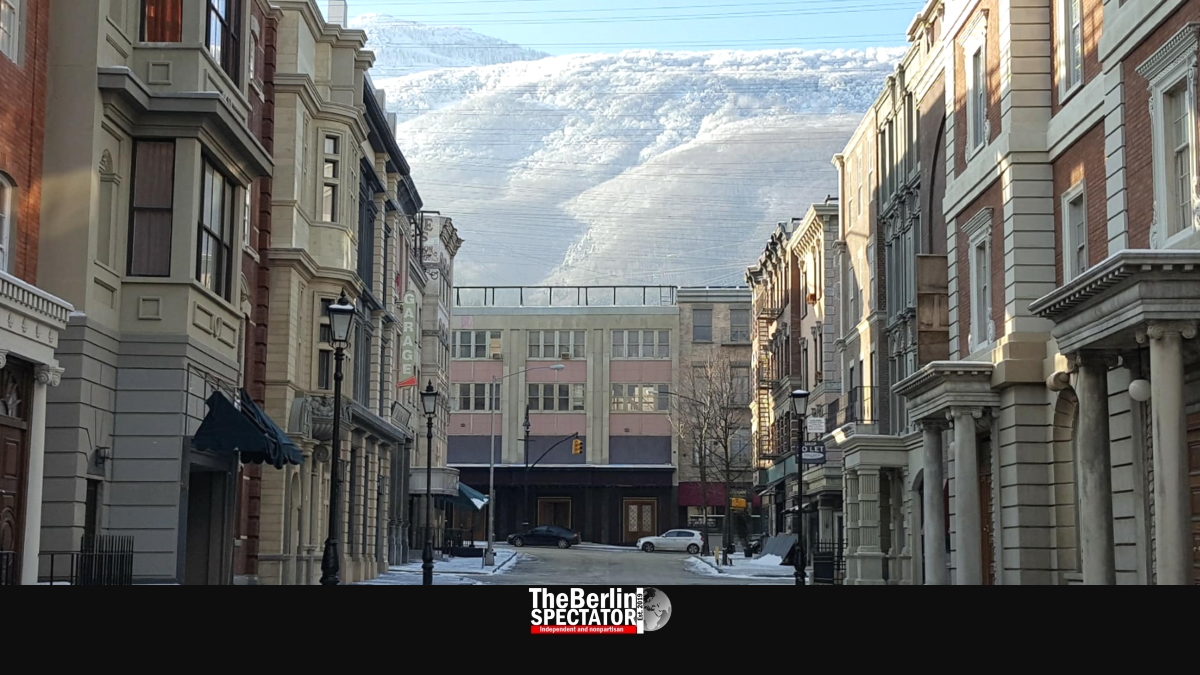 Located exactly 1,630 kilometers (1,013 miles) from Berlin and 10,621 km (6,600 miles) from Hollywood, a huge film studio in Bulgaria offers everything crews need to shoot and edit movies. The difference? Here, they won’t go bankrupt in the process.

Sofia, April 12th, 2018. Update: Berlin, April 14th, 2021 (The Berlin Spectator) — When archaeologists find this spot in 2000 years from now, they will be stunned. They will discover that Bulgaria, a small and beautiful country on the south-eastern edge of Europe, once had a secretive city, with streets very similar to those in London and New York. Only here, the stairs to the underground (or the subway, of course) do not lead anywhere. Entering the United States Post Office located here is not really possible either. And if it was, there wouldn’t be any stamps or services.

Only the Mountain is Real

A large parking lot in front of this non-existing city is plastered with used rifle bullets. A bank right next to it was obviously robbed by a violent gang. All of its windows are broken. At this place, everything looks real, but hardly anything is. The Vitosha mountain massif, which dominates everything around it due to its size, is pretty hard to hide. So, yes, the snowy mountain peaks with an elevation of up to 2,290 meters (7,513 feet) are very real indeed. These premises are located right at the foot of Vitosha.

Hollywood Without the BS

Every day is “casual Friday”. Lots of smokers do their thing in front of the studio buildings. At the studio cafeteria, they do not offer burgers, but sandwiches and European meals. From the New York, London and bank heist sets, a 5-minute walk will take visitors to a medieval village. Walking through it feels like time travel. From here, the Roman city and the Colosseum are just a few steps away. So are other sets.

In the main building, Yariv Lerner, this fascinating location’s director who is a likable yoga enthusiast, has his office. Casting, accounting, PR and countless other offices are always working. But Nu Boyana is far more than a few sets and some offices. This studio offers anything film directors or creative directors at advertising agencies see in their wet dreams. Nu Boyana is a high tech haven. It is Hollywood without the BS, and without the exaggerated prices.

Not only will this studio in Bulgaria provide all services anyone having to do with film will ever need, from script to screen, but also the very latest technology. What Nu Boyana calls “World Expertise in Filmmaking”, in their shiny booklet, is exactly what it says. Sound stages, production, post production, services and equipment of all kinds and reliable crews are included. And, an even more important aspect, they do have a lot of experience up here, on the foot of the huge mountain.

Sure, they have camera drones, camera cranes and dollies. Everyone does. But they also provide the very latest camera and lighting technology. Motion Capture Stage is the very latest gimmick directors use, since it saves time and money while helping to achieve stunning results. Guess what: They have it. And one of the largest new water tanks for filming purposes. You want to shoot ‘Titanic III’ or ‘Jaws XII’? This is the place.

There is something else Nu Boyana Film Studios offer to movie, TV series and TV commercial directors, namely stunning locations that are not on the premises. Within a 10 kilometer radius, they have an entire Eastern European capital to shoot in. It is a pretty exotic one. The mountain top is just minutes away.

The Black Sea coast, which provides excellent shooting opportunities, is less than 400 kilometers (249 miles) away from Nu Boyana. Besides, Bulgaria provides a lot more than that. Hardly any tourists who came to Sofia on cheap airline seats for sightseeing trips before the Corona crisis commenced even know Nu Boyana exists. Most of them have seen Gerard Butler fighting mean gangsters in ‘London has Fallen’, but they do not know the flick was actually shot at Nu Boyana.

Nu Boyana does offer tours now and then, especially in summer. Also they organize public events such as ‘Action Day’, during which an action movie director shows teenage boys how to film knights, Vikings and SWAT teams while they fight each other. They have even had concerts on their premises, in spring. But their main business consists of all aspects of filming. In this case all really means all.

Nu Boyana is the place where vistors might end up standing in the middle of a bank heist, where they might meet Samuel L. Jackson in the corridor, where they may have to duck down in order to make sure they don’t get hit by a camera drone. Nu Boyana is Hollywood in Europe, and the most fascinating place in Sofia.