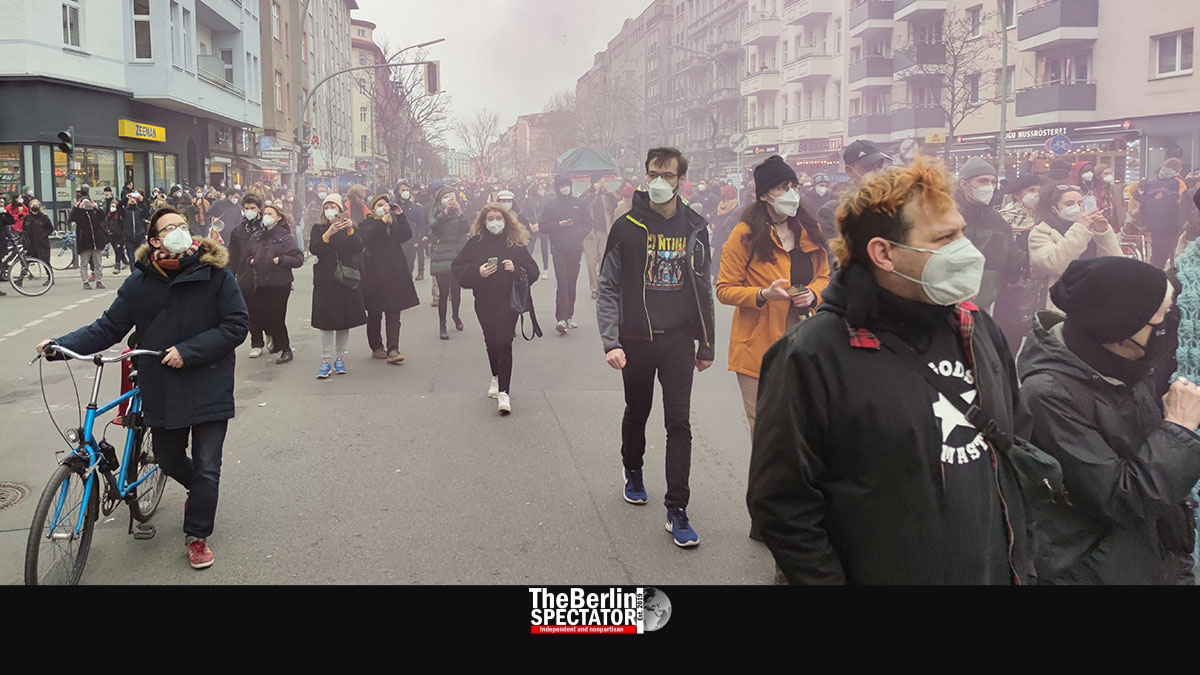 In Berlin, a huge protest against today’s ‘rent cap’ ruling took place on Thursday evening. Just hours before, Germany’s Constitutional Court had sacked the measure, saying the Berlin Senate had exceeded its authority.

Berlin, April 15th, 2021. Update: April 16th, 2021, 3:30 p.m. CEDT (The Berlin Spectator) — In Berlin’s Neukölln and Kreuzberg districts, thousands took part in what was announced as an “anger rally” against today’s decision by the Federal Constitutional Court’s decision to throw out the ‘rent cap’. The Berlin Senate had put it in place last year, as a measure against the affordable housing crisis in the German capital. Before the court decision was taken, the “anger rally” was announced by several organizations, including the Tenants’ Union, in case the outcome would be “negative”.

Hermannplatz, a square in Berlin’s Neukölln district, was crammed in the afternoon. Neither traffic nor pedestrians had the slightest chance to get through. Several bus lines were interrupted. Police officers needed to closer more and more streets by the minute, as thousands of mostly young protesters joined the event. On site, speakers said the court decision was unacceptable. Large real estate companies needed to be dispossessed because of it. This is a demand ‘The Left’, a far-left party that is part of Governing Mayor Michael Müller’s coalition in the city state of Berlin, had voiced in 2019. Afterwards, the Senate went for the ‘rent cap’, a compromise which was just sacked.

On signs some of the protesters carried the names of large real estate companies were combined with the F-word. On other signs, dispossessions were named as “the only option” that was left. The average age of those who participated seemed to be low, maybe somewhere around 25. They marched from Hermannplatz towards Kottbusser Tor, another infamous square in Berlin’s Kreuzberg borough. The protest, which led to a big traffic mess, just did not end. More and more people joined.

Berlin is used to protests. There are some 5,000 of them every year. But this one was different, because it was much larger than the police had anticipated and planned for. This became evident from the start. Considering the number of protesters, relatively few officers were on site at first. They tried to keep protesters away from some streets around Hermannplatz square, without success. According to the Berlin Police Department, several hundred protesters had been expected, but several thousand joined the rally. The organizers said there had been 25,000 participants.

The ended at Oranienplatz, yet another Kreuzberg square. According to the Berlin Police Department, officers were attacked when former participants threw stones and bottles at them after the rally, at 7:50 p.m.. Direct attacks against policemen and policewomen with wood slats occurred as well. Some 1,000 people chanted statements hostile to the police during the attacks. Several persons were arrested.

It was probably not the last rally against Thursday’s court decision and rising rents. Finding an affordable place to stay is almost a mission impossible in Berlin. Each rental apartment that is being offered draws hundreds of prospects. Conservatives and other opponents of the ‘rent cap’ slammed the Berlin Senate today, for “misleading” the city’s tenants.