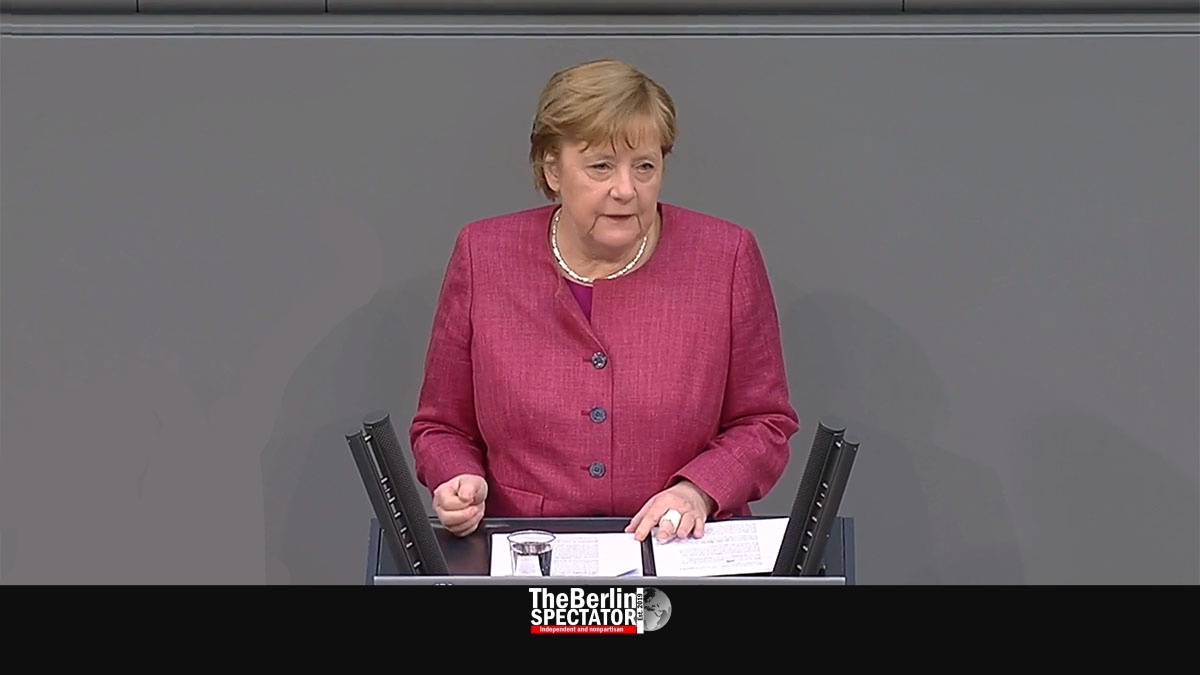 At the Berlin Bundestag, Angela Merkel defended her ‘Emergency Brake’ on Friday morning. This amendment to the Infection Protection Act dictates restrictions in counties with high Incidences. Parts of the opposition slammed Merkel’s plan.

Berlin, April 16th, 2021 (The Berlin Spectator) — This morning, Angela Merkel stood in front of the Berlin Bundestag and defended her ’emergency brake’. The latter is an amendment to Germany’s Infection Protection Act. Section 28b would force counties with Incidences above 100 to take certain measures. Those include nightly curfews — with exceptions, of course —, a closure of all non-essential shops and all cultural establishments, as well as tightened contact restrictions. At an Incidence of 200, schools would be required to offer online classes only.

Most of these measures are already part of an ’emergency brake’ designed to bring down the Coronavirus infection numbers which Chancellor Merkel and the First Ministers from Germany’s federal states agreed to, weeks ago. The issue is that many of them either ignored or toned down the measures they themselves agreed to. That is why the Chancellor announced she would go for an amendment of the Infection Protection Act. She wants to push it through both the Bundestag and Bundesrat by next week.

In front of the MPs at the Bundestag, she said the situation was “very serious”. The third wave and its rapid increase of infections needed to be stopped by both the state and the federal states. To Angela Merkel, the ’emergency brake’ is “overdue”. Intensive care physicians had warned the country many times. “Why would be ignore these warnings?” was a rhetorical question Mrs. Merkel asked. She said doctors and nurses needed “our support”.

Curfews are Part of Law Already

At the Bundestag, the Chancellor stated she was aware of the fact that the amendment she wanted contained tough restrictions, including nightly curfews. But the latter were not a new invention. The opposite was the case, since the same measure was already part of the existing version of the Infection Protection Act. Several federal states had put it in place. The same applied to other European states.

The question whether or not those curfews were necessary had to do with assessing the question whether avoiding a temporary deprivation of certain freedoms was more important than preventing more infections or not. To her, the answer was that those curfews were absolutely necessary, also because they would decrease the number of movements at night, including in public transport.

Angela Merkel said the Coronavirus did not pardon any hesitation, it did not negotiate and only understood “the language of resolve”. This is what the country had learned in the past 13 months. The measures included in the amendment had one goal, namely taking the country out of these times of rising infection numbers, and to make sure Germany’s health system would not be overburdened. The Chancellor addressed the nation as well by thanking people for following the rules. “I know we as politicians do not always make things easy for you”, Angela Merkel conceded.

The opposition slammed Mrs. Merkel’s approach. For the extremist right-wing AfD, Alice Weidel said the Chancellor’s actions were unconstitutional. The liberal FDP’s Christian Lindner threatened the government. He said if the amendent was passed the way it was worded now, his party would take the matter to Germany’s Constitutional Court in Karlsruhe.