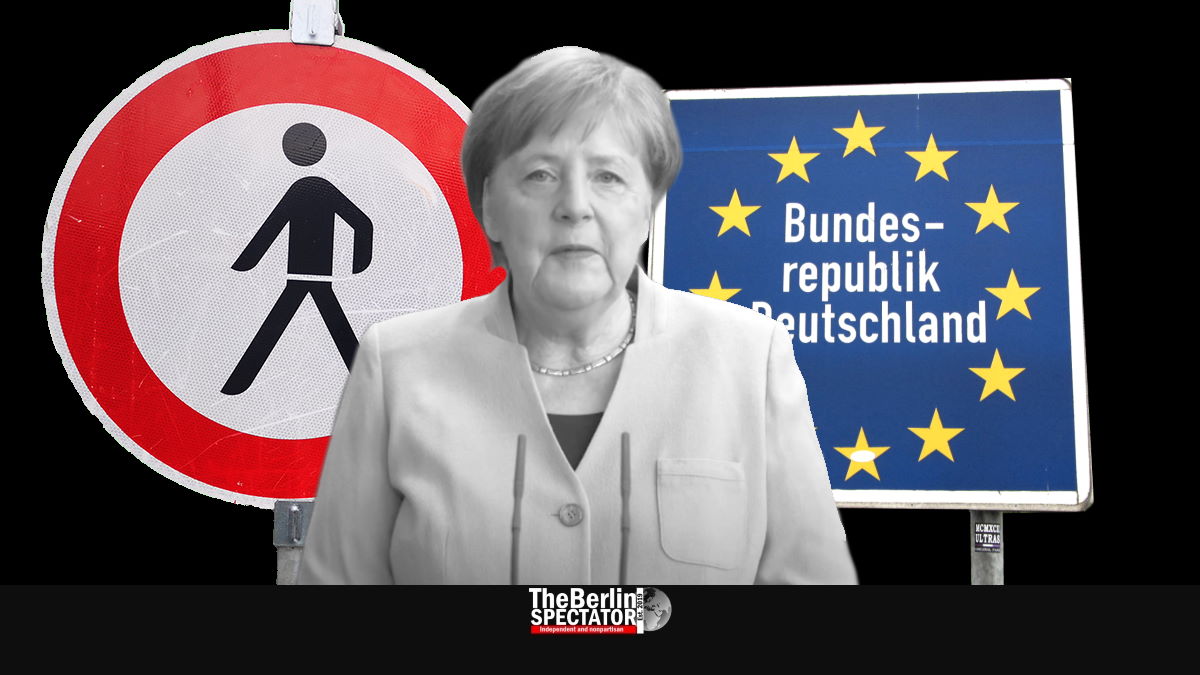 This morning, the Berlin Bundestag is scheduled to discuss Angela Merkel’s amendment to Germany’s Infection Protection Act. It should be adopted right now. The discussion has to end. And those nightly curfews need to be implemented.

Berlin, April 16th, 2021 (The Berlin Spectator) — More and more Berlin politicians, including MPs, say they support stricter rules, but reject parts of Angela Merkel’s ’emergency brake’. They do not see why the amendment to the Infection Protection Act the Chancellor wants to push through the Bundestag and the Bundesrat as quickly as possible should include nightly curfews. The opponents of this measure list arguments that sound convincing at first glance:

> Aerosol experts say the risk to be infected outdoors is very low.

> Keeping people from leaving their homes at night was unconstitutional.

> Families and other people needed to have the opportunity to take late evening walks.

Angela Merkel’s ’emergency brake’ is a section the Chancellor wants to add to Germany’s Infection Protection Act. It would force counties in the entire country to follow strict rules if and when their Incidence Numbers exceed 100 for three consecutive days. This includes closing everything down, tightening contact restrictions, and putting in place nightly curfews from 9:00 p.,. to 5:00 a.m.. Of course, there would be exceptions. This ’emergency brake’ is Mrs. Merkel’s reaction to the behavior of some First Ministers who refused to implement their own decisions. A very similar ’emergency brake’ was approved by the Corona conference the First Ministers are part of. But it was undermined and ignored, in spite of rising Corona infection numbers.

Some critics also say it was wrong to link strict rules to high Incidence numbers only. There were other important factors as well. The ’emergency brake’ needed to be linked to those too, some critics say.

First of all: The Incidence is an important indicator. It shows what is going on in any county or city, along with the trend. An increasing Incidence also shows what a county will have to expect at the ICUs of its hospitals. Adding more numbers, or complicated formulas, would likely not change much at all. Nor would it end this useless discussion which has been going on for too long. The right thing to do is to implement Mrs. Merkel’s measures right now. More than once, leading virologists and intensive care physicians have told us what will happen if we do not act now: The health system will be overburdened.

Now to the nightly curfews Angela Merkel wants to include: Restricting people by taking away their rights, including the right to leave their homes at 3:00 a.m., should never be taken lightly, even if the measure is a temporary one. But protecting them from the Coronavirus is a lot more important than the kind of freedom they will not have for a limited amount of time. Besides: Where are people supposed to go at night in the first place? Everything will be closed in the counties affected by the ‘brake’.

So, why should responsible citizens be confined to their homes at night? They should not. This is not about responsible people, but irresponsible ones. This is about preventing parties and other illegal gatherings from taking place. So, getting infected outdoors is very unlikely anyway? Maybe, but gatherings of the kind Mrs. Merkel wants to prevent often lead to lots of contacts indoors. Besides, those parties in parks involve the consumption alcohol, in some cases even drugs. Under these conditions, nobody will care about any rules or infection risks. We have seen this kind of thing happening far too often since the crisis commenced.

The right thing to do is to pass the ’emergency brake’ law amendment right now. Let’s listen to the leading experts. Let’s get the numbers down, let’s protect our health system, let’s save lives. Parties can be celebrated later. The discussions about details people may want to include or exclude in the amendment of the law has been delaying the right steps for too long already.