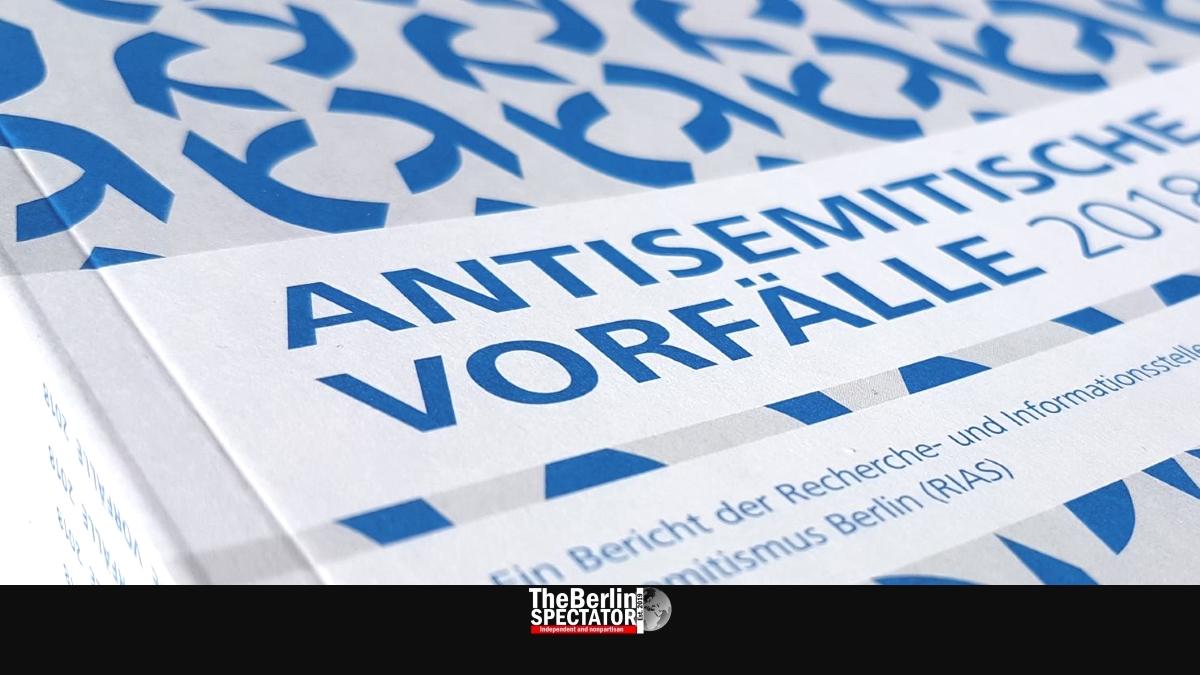 In Berlin, the non-governmental organization RIAS released its annual antisemitism report for Berlin today. The number of incidents rose in 2020. Jews and other individuals were attacked, threatened and offended. Jewish and Israeli institutions got their share of hatred too.

Berlin, April 19th, 2021 (The Berlin Spectator) — There are several forms of antisemitism which taget Germany’s small Jewish minority, people who are being seen as Jews, but also Germany’s free, democratic society. Antisemitism and similar forms of hatred are symptoms, meaning the more there are, the more serious is the condition a society is suffering from. According to the organization ‘Recherche und Informationsstelle Antisemitismus Berlin’ (RIAS) the number of reported antisemitic incidents in Berlin increased in 2020. There were a total of 1,004 of them.

In the Corona pandemic, centuries-old conspiracy myths are returning. In the Middle Ages, Jews were accused of poisoning wells or bringing in the plague. Today, one popular antisemitic conspiracy theory is to make Jews responsible for the spread of Corona, offline or on the Internet. This is exactly what has happened a lot, again, in 2020. But there were physical attacks as well, criminal damage and other manifestations of hatred towards Jews. The number of cases in 2020 has increased by 13 percent, compared to 2019. What this means is that the Corona restrictions do not seem to be stopping antisemitic haters.

At countless protests staged by Corona deniers all over Germany in 2020, the Holocaust was trivialized by participants who equated the anti-Corona measures put in place by the government with Nazi Germany’s antisemitic policies. This form of antisemitism is just as disgusting as Israel-related antisemitism. In the latter case, conspiracy theories about the only predominantly Jewish state in the world are being spread.

Not only are there different forms of antisemitism, but also several sources. It comes from the far right, the far left, from Islamists and even from people who generally do not seem to be extremists, until they suddenly spread antisemitic propaganda. RIAS counted all incidents from all of these sources. The fact that antisemitism is on the rise again in Germany, 75 years after the liberation and the end of the Shoah, is hard to digest. And it is dangerous to both Jews and non-Jews, to democracy.

According to RIAS, offending behavior and antisemitic mass mailings in 2020 affected Jews, and persons deemed as such, were targeted in more direct ways than in the year before. Two-hundred and thirty eight individuals were affected. Far more antisemitic incidents than before, 47 of them, were registered in the direct residential environment of the victims. A total of 51 incidents were reported in Berlin’s public transport. The new antisemitism report lists 271 antisemitic incidents connected to far-right extremists or populists. Institutions were affected in more than 500 cases. While the number of physical attacks decreased to 17 in 2020, that of antisemitic incidents on the Internet rose substantially.

On average, there are about three occurrences of Jew-hatred in Berlin every day. “To Berlin Jews, antisemitism was omnipresent in 2020 as well”, Benjamin Salz, RIAS’s project manager, stated. “The kind of threat potential that developed during the pandemic will not just vanish afterwards.” For Berlin’s Jewish Congregation, its antisemitism appointee Sigmount Königsberg said antisemitism was a chameleon that quickly adapted. While Israel-related antisemirism had been dominant in 2018, more conspiracy theories had been spread in 2020.

“Antisemitic attitudes exist independently from the Corona pandemic”, Samuel Salzborn, Berlin’s contact person for antisemitism cases, stated. “But the pandemic is being used as a pretense to spread antisemitic conspiracy myths.”