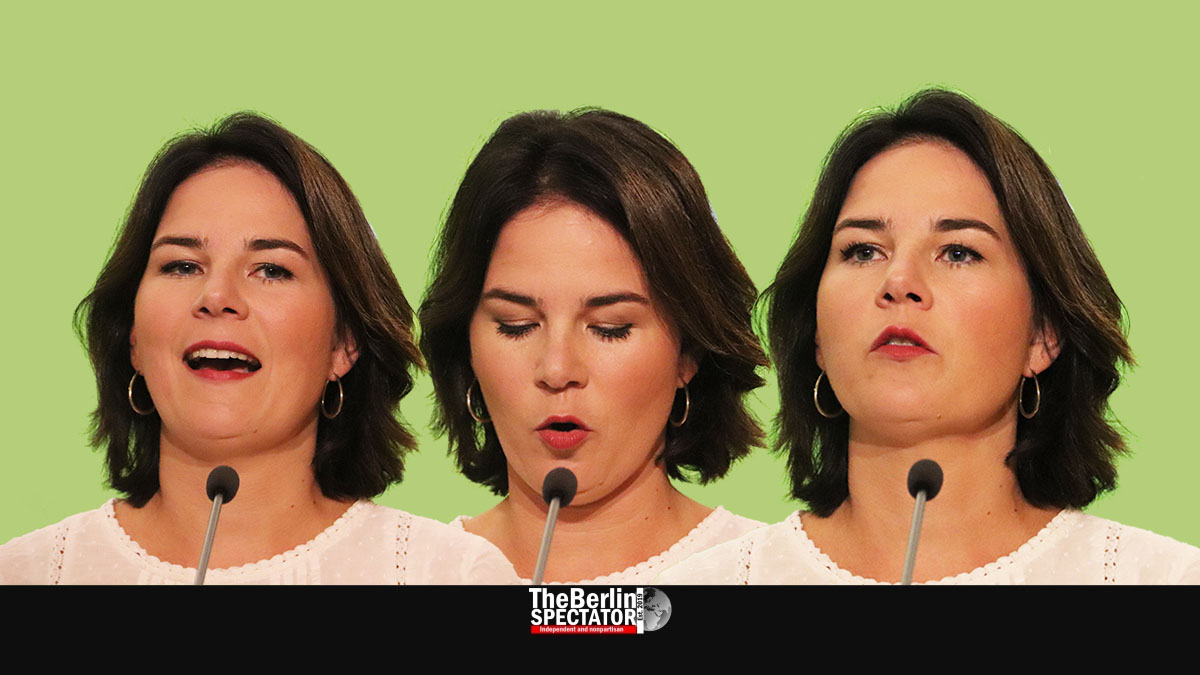 The die is cast. Annalena Baerbock is the first candidate for Chancellor the German Greens ever named. Could she actually end up in the Chancellery?

Berlin, April 19th, 2021 (The Berlin Spectator) — In Germany, the Greens have a candidate for Chancellor for the first time ever. Annalena Baerbock and the other co-chairperson, Robert Habeck, decided themselves. Since the Greens are a feminist party, the decision is not exactly a surprise. Also because the competition has male candidates only, gender was definitely an aspect, but it is not everything.

Annalena Baerbock is only 40 years old. As opposed to Robert Habeck, she has never governed, but she brings along experience of different kinds. For instance, she worked for an MEP in Brussels, took part in an exchange program in the United States of America as a student and she was an MP at the Berlin Bundestag. Her background is law. Besides, Annalena Baerbock is considered tough enough when it comes to taking decisions and enforcing them. While Habeck is also popular, he has not always been able to answer all interview questions convincingly, while Annalena Baerbock has.

“We want to make policies for the entire society”, the new candidate stated in front of the press in Berlin. “We have a concept for the chancellery and intend to lead the country into a good future. But change is necessary”, Annalena Baerbock said. She explained she and the Greens wanted to work for a just and diverse country, one in which climate protection was the fundament of prosperity.

She conceded she had “never been Chancellor or minister before”, but also talked about experience on the international level, for instance when she stressed she had been part of the Paris Climate Conference. “Climate protection is the task of our times”, she stated. Courage was required to actually change things. “In the past years, we have heard what is not possible, all the time. Now, it has to be about the question what is possible. We need actual change instead of promises.”

The new Green candidate for Chancellor said she wanted to enable the country to be the best it could be. A government she might lead would be firm, transparent, capable of learning and self-critical. “I want politics that look ahead, that listen, that are humane and empathetic”, Annalena Baerbock stated. She said she knew a lot of responsibility was involved and that the expectations were high. “We will do this together.”

Germany had a lot of potential, Mrs. Baerbock said. By stressing the country had invented both the bicycle and the car, she wanted to say the Greens were a party that stood for climate protection, but also for a modern industry. “It is about time that politics in Germany surpass themselves”, the new candidate for Chancellor stated.

The elections for the Berlin Bundestag will take place on September 26th, 2021. Germans do not vote for the Chancellor directly, but for the parties they want to strengthen, or those they want to get into the parliament. Even though the Bundestag votes for the Chancellor, voters still want to know who the candidates are. So far, there are two official candidates for Chancellor: Annalena Baerbock for the Greens and Olaf Scholz for the Social Democrats (SPD).

The conservative ‘Union’ parties CDU and CSU are arguing a lot these days. It is about the question whether Armin Laschet or Markus Söder should become their candidate. In the polls, the conservatives are at about 28 percent right now, while the Greens are the second-strongest party with about 20 percent. It is by no means certain they will end up in second place. The SPD, which stands at 18 percent right now, might overtake them again.

What constellations for coalitions are concerned, the Greens could become the CDU/CSU’s junior partner, they could lead or become part of a center-left coalition with the center-left SPD and the far-left ‘Die Linke’, or they could agree to becoming part of a ‘traffic light coalition’ with the SPD and the neoliberal FDP. But, first, the decision to send Annalena Baerbock into the race needs to be approved by the Green party convention in June.