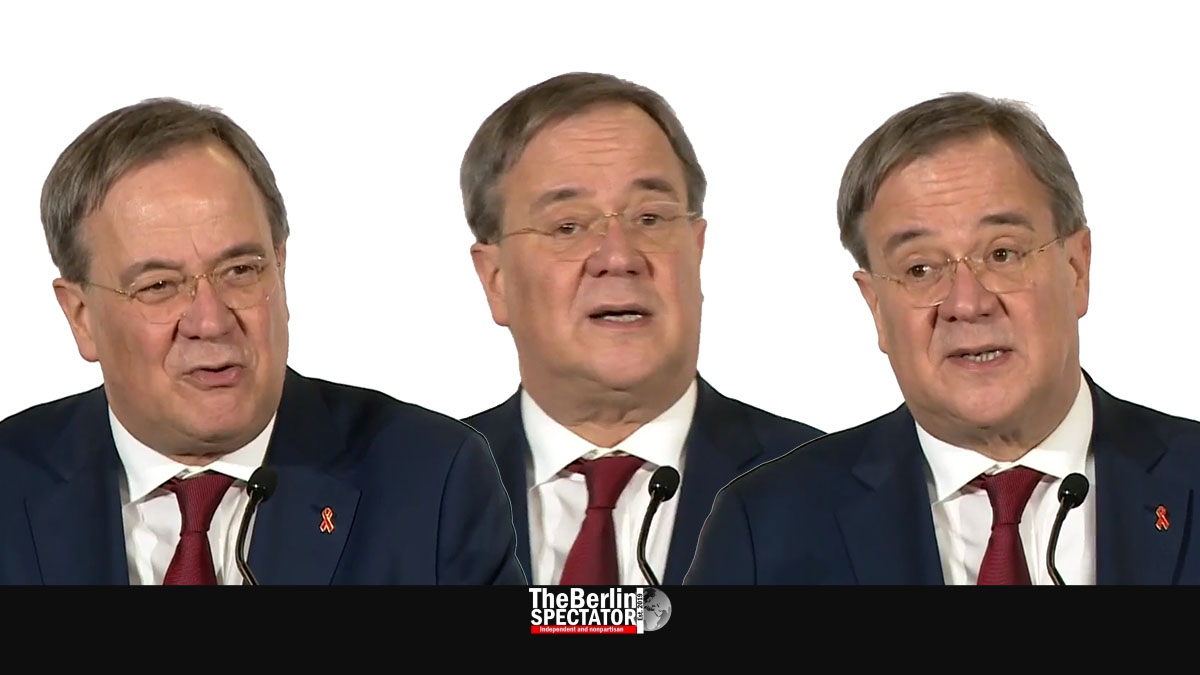 Armin Laschet just became candidate for Chancellor for Germany’s conservative Christian-Democratic Union (CDU) and the Bavarian Christian-Social Union (CSU). He might be Angela Merkel’s successor in a few months from now. The elections take place on Sunday, September 26th, 2021.

Berlin, April 20th, 2021 (The Berlin Spectator) — Armin Laschet already is First Minister of North Rhine-Westphalia, Germany’s largest federal state, and chairman of Chancellor Angela Merkel’s conservative CDU. Now he became candidate for Chancellor, which means his chances to become Mrs. Merkel’s successor just increased substantially. In October or November, after coalition talks he might hold, none other than Armin Laschet might be elected Chancellor by the Bundestag. Voters who want him may support his party, the CDU, and its Bavarian version CSU.

Armin Laschet had a strong opponent, namely the powerfully eloquent Markus Söder from Nuremberg, who is First Minister of Bavaria. After an intense fight for the candidacy, which took eight days, Söder just conceded defeat. From the perspective of many, in Bavaria and all over the Federal Republic of Germany, the better, stronger candidate just congratulated the second-best one who was selected in Berlin, by a majority of participants of the CDU’s party board meeting on Monday night. Thirty-one of them voted for their own party chairman, nine for Söder.

In Munich. Markus Söder stated the die had been cast. “We made an offer and we would have been ready to serve the country”, he said. For this, the CSU and he himself had gotten “an unbelievable amount of support”. The Bavarian First Minister thanked everyone and said there was responsibility for the country, but also for the ‘Union’ parties, CDU and CSU. “We do not want division”, Markus Söder stressed. The CDU had convened and decided. Söder said he had called Laschet and congratulated him.

A Lot of Traction Force

Söder promised he and the CSU would support the candidate in any way they could. Now, the task was to close ranks and to move into the future together. “I wish Armin a lot of success, and the CSU is offering him its support”, Markus Söder said in the early afternoon. The CSU’s secretary general Markus Blume added, Söder had shown the ‘Union’ “how much traction force he can develop. Markus Söder enthuses people. He obviously was the candidate of hearts.”

Armin Laschet, the new candidate, is known as a friendly person who has experience with winning elections, and someone who knows how to unite. At the same time, his speeches during the ongoing Corona crisis have not always been convincing. Still, the CDU’s leadership wanted him. Angela Merkel reportedly did not say much during yesterday’s party board meeting. As the outgoing Chancellor, who has enough after sixteen years, she obviously does not want to interfere. But some of her confidants, including Commerce Minister Peter Altmaier, wanted Söder.

In the CDU, many are happy about the outcome. Others, including several big names, are not. To the competition, namely the center-left Greens, the center-left SPD, the far-left ‘Die Linke’, the center-right FDP and the extremist right-wing AfD, candidate Laschet might be the biggest present the ‘Union’ ever gave them. But, as they say in Germany, the invoice will be received on election day, which is September 26th.