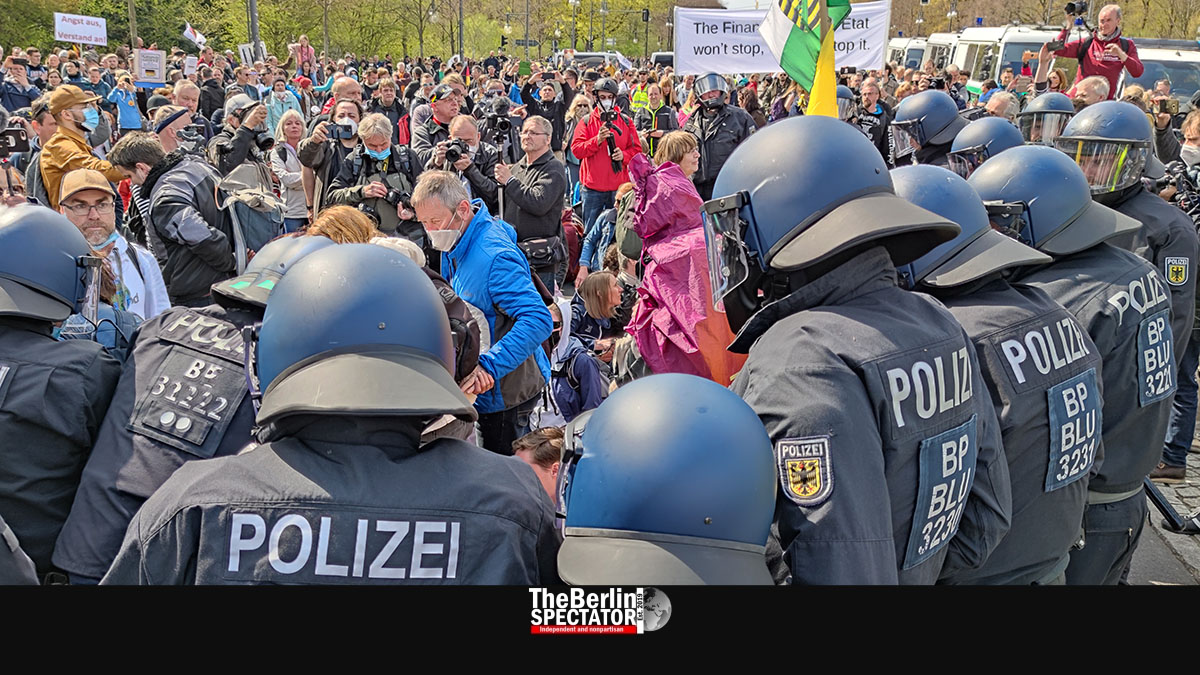 While the Bundestag approved Angela Merkel’s amendment to the Infection Protection Act today, thousands of people rallied against the decision and the government’s other Corona policies, a few steps away from the Reichstag. The police ended the protest at 12:30 p.m..

Berlin, April 21st, 2021. Update: 7:35 p.m. CEDT (The Berlin Spectator) — When the Bundestag started discussing the federal government’s amendment to Germany’s Infection Protection Act again at 11:00 a.m., thousands of people were already protesting against the new Corona rules which are supposed to protect the population more. Chancellor Angela Merkel pushed her ’emergency brake’ law through the parliament today. Once the Bundesrat approves it as well, there will be uniform rules in Germany, for counties in which the Incidence Numbers exceed 100. Those include semi-curfews at night.

Up to 8,000 protesters, among them many Corona deniers, disagreed with the amendment to the law and the federal government’s other efforts to get the Corona infection numbers down. One speaker at the rally said Corona tests school kids had to go through were “terrible for their psyche”. The next one stated all democrats needed to stand together since the government was “taking away our freedom” and “destroying our economy”. Besides “experiments on humans” were conducted.

At ‘Strasse des 17. Juni’, located close to both the Reichstag and Brandenburg Gate, the third speaker said there was “no Spanish flu”. For that reason “no Merkel and no billionaire has the right to govern us, our bloodstream, our families, friends or homes.” The “flu” was a lie that was being spread to scare people. For hours, conspiracy theories were propagated. One speaker compared Germany’s Corona policies with those of Nazi Germany. It is not the first time Corona deniers did so.

The speeches were interrupted by messages the police conveyed to the protesters, through giant loudspeakers mounted on vehicles. Several times, they ordered the crowd to follow the Corona rules, by keeping their distance and wearing masks, but hardly anyone did. One of the protest’s organizers told the participants to wear masks “or they will end the event”, but they did not listen to her either.

Shortly before 12:30 p.m., the police announced the protest had just ended because of the participants’ behavior. Now they were ordered to leave ‘Strasse des 17. Juni’ towards the south, through ‘Tiergarten’ park, but only about half the protesters did. After a while, hundreds of police officers in riot gear started pushing them into the park. A total of 152 protesters were arrested.

A total of 2,200 policemen and policewomen were on duty. They came from several federal states, including North Rhine-Westphalia, Brandenburg, Bremen and Saxony. Germany’s Federal Police was there too because the Berlin Police could not deal with the protest alone. Besides, this was not the only Corona denier event they had to deal with on Wednesday. Once the police had separated the crowd, they pushed groups of them into the park, one by one. Dozens of individuals sat down on the street, with the attention of creating a blockade. The police sent members of its communication team to talk them into giving up and leaving. Those who refused were carried away, into the park.

The entire government quarter was cordoned off by police. Two giant water guns were parked at Brandenburg Gate, just in case. This time, the authorities made sure no Corona deniers or Nazis reached the Reichstag. All of those conspiracy theories the protesters actually seemed to believe were the most scary part this afternoon. Another Corona denier protest was supposed to commence at Bellevue Palace this afternoon.