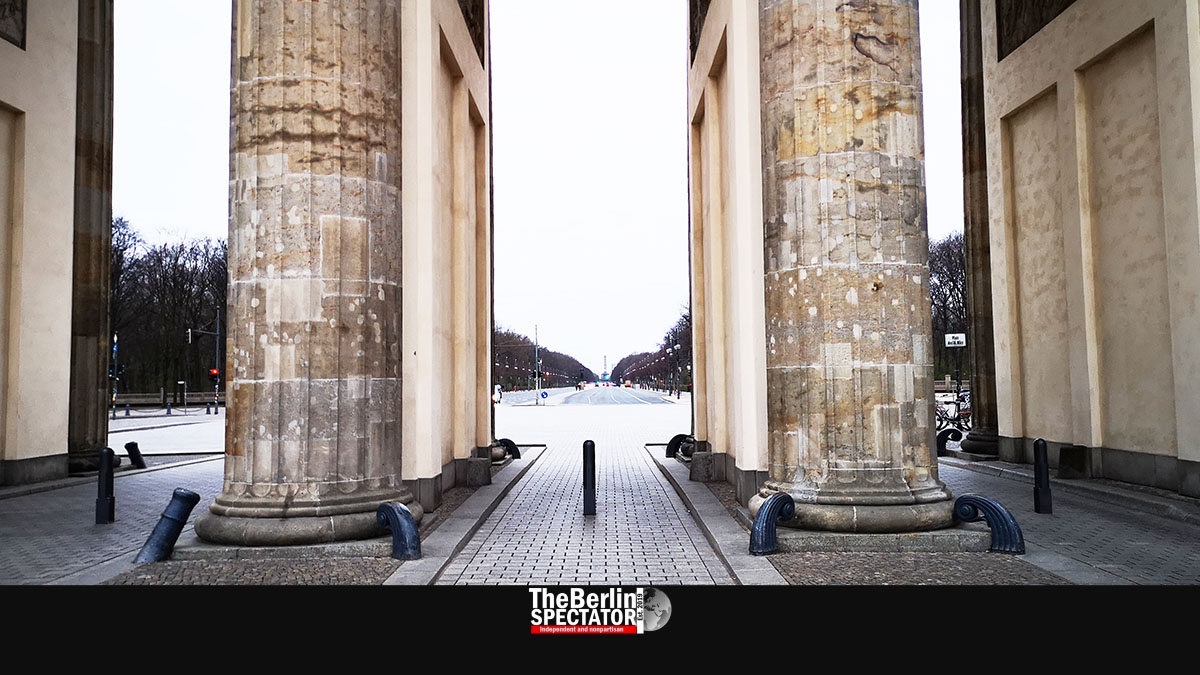 The Berlin Bundestag is scheduled to vote on the ’emergency brake’ law today. Several protests against the government’s plans were announced in Berlin. For that reason, the police in the German capital are getting help from several other federal states.

Berlin, April 21st, 2021 (The Berlin Spectator) — At 11:00 a.m. on Wednesday, the Bundestag will deal with the amendment to Germany’s Infection Protection Act Chancellor Angela Merkel and her government prepared in the past days. The final version of the so-called ’emergency brake’ looks different from the original because some points had been criticized even within the government parties CDU, CSU and SPD. After another short debate, the parliament will likely approve the changes against the will of two opposition parties.

The purpose of the amendment to the law is to have uniform rules in all of Germany when the infection numbers exceed certain levels. Section 28b will force counties to take specific measures when their Seven Day Incidence is north of 100. Those include semi-curfews at night, between 10:00 p.m. and 5:00 a.m.. There are several exceptions. For instance, jogging and taking walks until midnight will be allowed as long as the people who do are alone. In an interview with the ‘Tagesspiegel’ daily, the Bundestag’s President Wolfang Schäuble defended the ’emergency brake’ law by saying it was “proportional”.

Several protests against the amendment of the Infection Protection law were registered. Two of them are scheduled to take place in the morning, at Brandenburg Gate and ‘Strasse des 17. Juni’, and one in the afternoon. Yet another protest against the ’emergency brake’ law which was supposed to take place today was forbidden by the Berlin authorities. Since the Berlin Police Department cannot deal with all protests on its own, officers from Brandenburg, Bremen, North Rhine-Westphalia and Saxony are on the way to the capital. Germany’s Federal Police is supposed to help as well.

The Corona situation in Germany remains serious in the sense that the number of Corona patients who need to be treated in intensive care units is increasing. There are almost 5,000 of them right now. While Germany’s Seven Day Incidence Number decreased a little, to 160.1, the Robert Koch Institute reported 24,884 new infections within the past 24 hours, some 3,200 more than last Wednesday. Schleswig-Holstein is still the only federal state in Germany with an Incidence below 100. It stands at 71.9 right now.

Germany’s vaccination campaign slowed down to some extent. On Monday, 381,095 Corona vaccine doses were administered. The percentage of Germans who got their first shot is now 20.2, while 6.7 percent got both required shots. The total number of vaccine doses that have been administered in Germany is 22,378,776.

In the meantime, France is complaining about Germany’s strict anti-Corona measures along parts of the border the two countries share. France’s Europe Minister Clément Beaune told the radio station ‘France Info’, there was hardly any traffic between the French Moselle district and neighboring Germany. The Berlin government needed to ease the restrictions. The problem is that the South African Coronavirus variant has been spreading in Moselle.