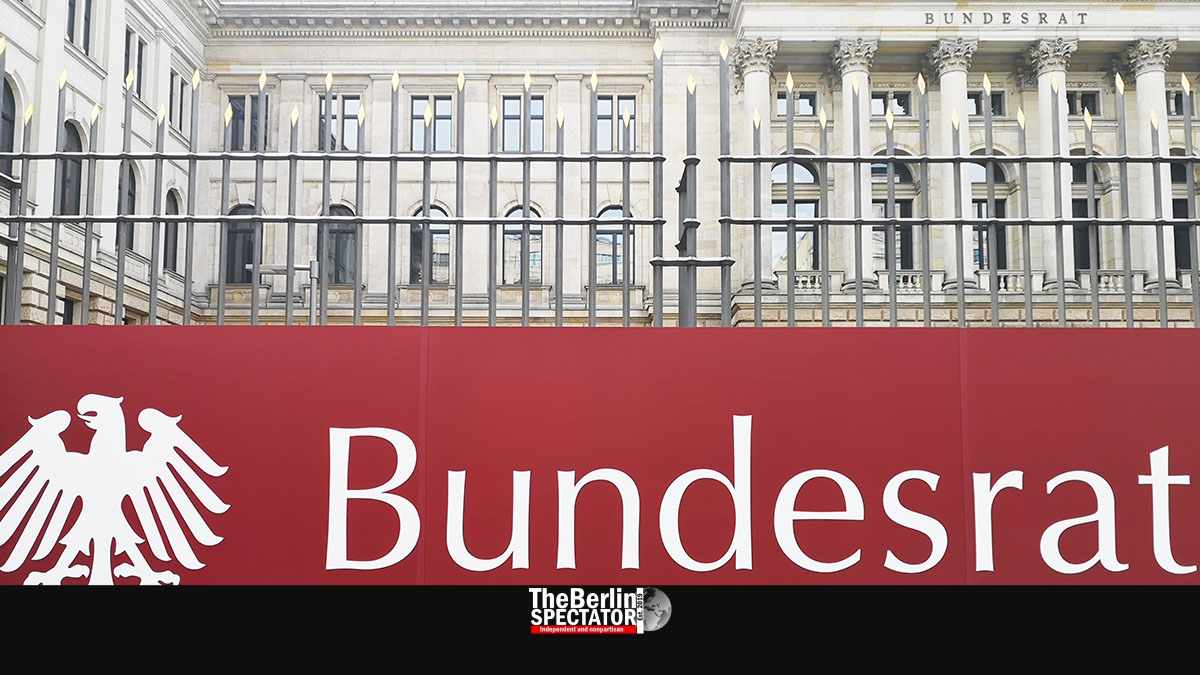 In Berlin, the Robert Koch Institute had to release high Coronavirus infection numbers yet again. In the past 24 hours, 29,516 new cases were reported. In the meantime, the Bundesrat ok’ed the ’emergency brake’ law today.

Berlin, April 22nd, 2021. Update 3:52 p.m. CEDT (The Berlin Spectator) — The Bundesrat, which is the legislative body that represents Germany’s sixteen federal states, approved the government’s amendment to the Infection Protection Act today. It already passed the Bundestag yesterday. On Thursday afternoon, President Frank Walter Steinmeier signed the law. It forces counties to follow certain rules if and when their Incidence Numbers exceed 100, and will take effect once it was announced in Germany’s Federal Law Gazette.

Four weeks ago, when some federal states refused to implement an earlier version of the ’emergency brake’ their First Ministers had agreed to before, Chancellor Angela Merkel said she would have to look into changing the Infection Protection Act for that reason. It took her four weeks to get it done. Very soon, nightly semi-curfews and other measures will apply in most counties in Germany. Many have had high Incidence Numbers for months.

On Wednesday, conspiracy theorists had staged a big protest against the ’emergency brake’ and the government’s other Corona policies. Some 8,000 people took part. Since they did not follow the Corona rules and ignored orders the police gave them, the protest was ended. More than 150 protesters were arrested. Some 2,200 police officers from several federal states were involved.

While the ‘Bild’ tabloid, Germany largest newspaper, ran a campaign against the ’emergency brake’ law on Thursday (“A Dark Hour for Freedom”), experts welcomed the new measures. For the doctor’s association ‘Marburger Bund’, its chairlady Susanne Johna told the ‘Rheinische Post’ daily, the ’emergency brake’ contained the right measures, but they did not go far enough. Besides, they were being approved far too late.

The federal state of Mecklenburg-Hither Pomerania in Germany’s north-west is kicking out tourists and other visitors because of the third Corona wave. Secondary home owners, campers and other tourists need to leave the state until tomorrow (Friday) night. From Saturday, only persons whose primary address is in Mecklenburg-Hither Pomerania may enter. There is an exception for people who visit their “core family” there. Before Corona hit Germany exactly 450 days ago, entry bans of this kind in the Federal Republic of Germany were unthinkable. Persons who get caught entering the federal state illegally will have to pay high fines.

Half a Million Vaccinations

According to the Robert Koch Institute in Berlin, 29,518 new Corona infection cases were reported in the past 24 hours. This number is about as high as it was last Thursday. Germany’s Seven Day Incidence rose slightly. On Tuesday, more than 535,000 doses of Corona vaccine were administered.