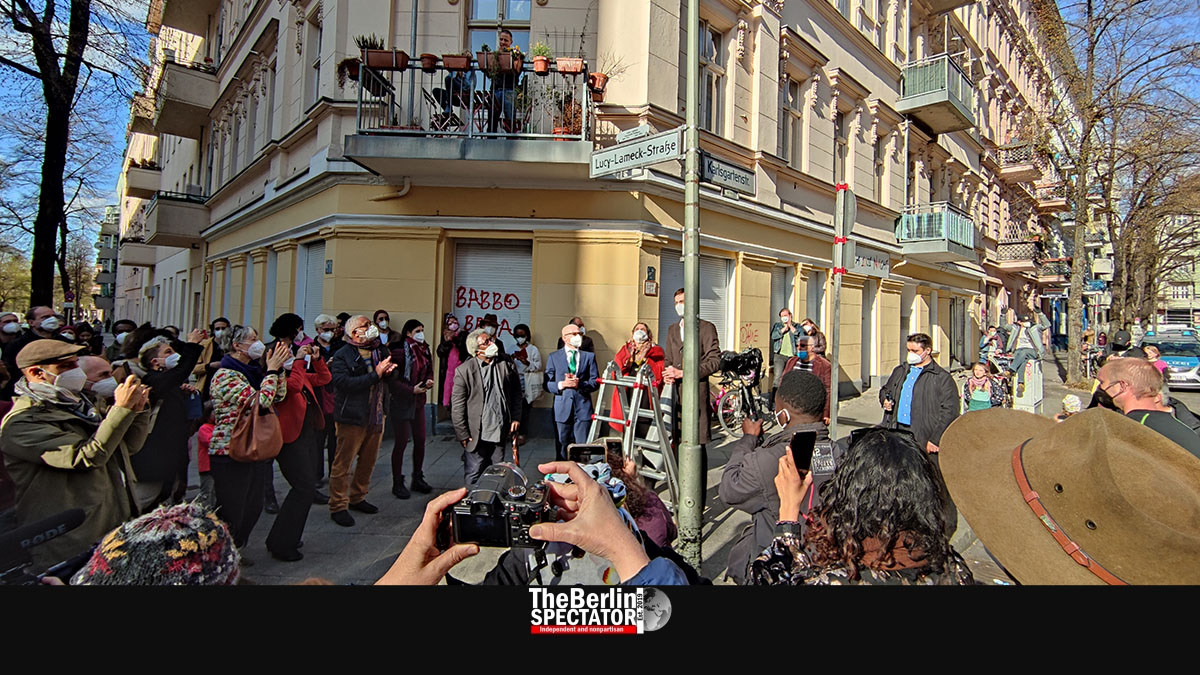 Abdallah Saleh Possi, the Tanzanian Ambassador to Germany, and District Mayor Martin Hikel were among those who renamed former Wissmannstrasse in Berlin’s Neukölln district on Friday. It is now Lucy Lameck Strasse. The renaming had valid reasons.

Berlin, April 23rd, 2021 (The Berlin Spectator) — “There is an end and a beginning today”, Neukölln’s District Mayor Martin Hikel said at the renaming ceremony. “This is the end of Wissmannstrasse. In 1890, it was named after one of the key players of Germany’s colonialism.” Indeed, Hermann von Wissmann was the ‘colonial administrator’ of ‘German East Africa’. He contributed to the colonization by violently crushing the resistance in the area of today’s countries Tanzania, Burundi and Rwanda. “Today, we know Wissmann was not a hero, but a murderer”, Hikel stated.

Since the cultural venue ‘Werkstatt der Kulturen’ had been established in Wissmannstrasse in 1993, the street name had been discussed, the District Mayor said. Since, many people had become active with the goal of finally getting rid of it. Hikel mentioned Mnyaka Sururu Mboro, one of the founders of the association ‘Berlin Postkolonial’ who has been part of the efforts, and who was part of the event. “Because street names are present permanently, they are not trivial”, Martin Hikel told residents, other politicians and activists who came to the ceremony.

Lucy Lameck had been “a dedicated fighter against colonialism and the first woman in Tanzania’s parliament”, Hikel said. The fact that the street was named after her now was “a statement for equal rights for women in our society”. Tanzania had needed to become independent from Germany, in order to be able to build a democracy. And Lucy Lameck had been a staunch opponent of heteronomy. “Neukölln can be proud to have a Lucy Lameck Street, starting today”, Mayor Hikel stated.

‘Best Friends with a Troubled History’

Ambassador Abdallah Saleh Possi thanked all individuals “who are keeping the discussion about colonialism alive” and the district councilors who had voted to replace the old street name with that of Lucy Lameck. “For Tanzania, this occasion is of particular importance”, the Ambassador said at the renaming ceremony in Berlin’s multicultural Neukölln district. “Today, Tanzania and Germany can be compared to two best friends with a troubled history.” Both had “no option, but to overcome the past”, including the “unpleasant colonial history”, Possi stated.

Several excellent artists played from Germany and African countries played World Music at the event which was supposed to be a big street fest. Instead, only 50 guests were admitted to the main part of the ceremony because of the Corona rules. Ambassador Possi, District Mayor Hikel, the activist Mboro and neighbors finally gathered at one of the street name signs. Hikel climbed a ladder, in spite of the fact that he is extremely tall, in order to take off the Wissmannstrasse sign, before uncovering the new one that says ‘Lucy Lameck Strasse’ (spelled ‘Lucy-Lameck-Straße’ in German).

Second Wissmannstrasse to be Renamed

Berlin has more streets, squares and train stations that are supposed to be renamed because today’s names are either racist or glorify colonialists. For instance, there is another Wissmannstrasse in the German capital. Not for much longer. Members of the right-wing extremist party AfD had tried to prevent the Neukölln renaming from happening, without success.

Related feature: Berlin: The Renaming of a Street and the Complications that Arise

What are Germany’s ‘Emergency Brake’ Rules? When and where do they Apply?