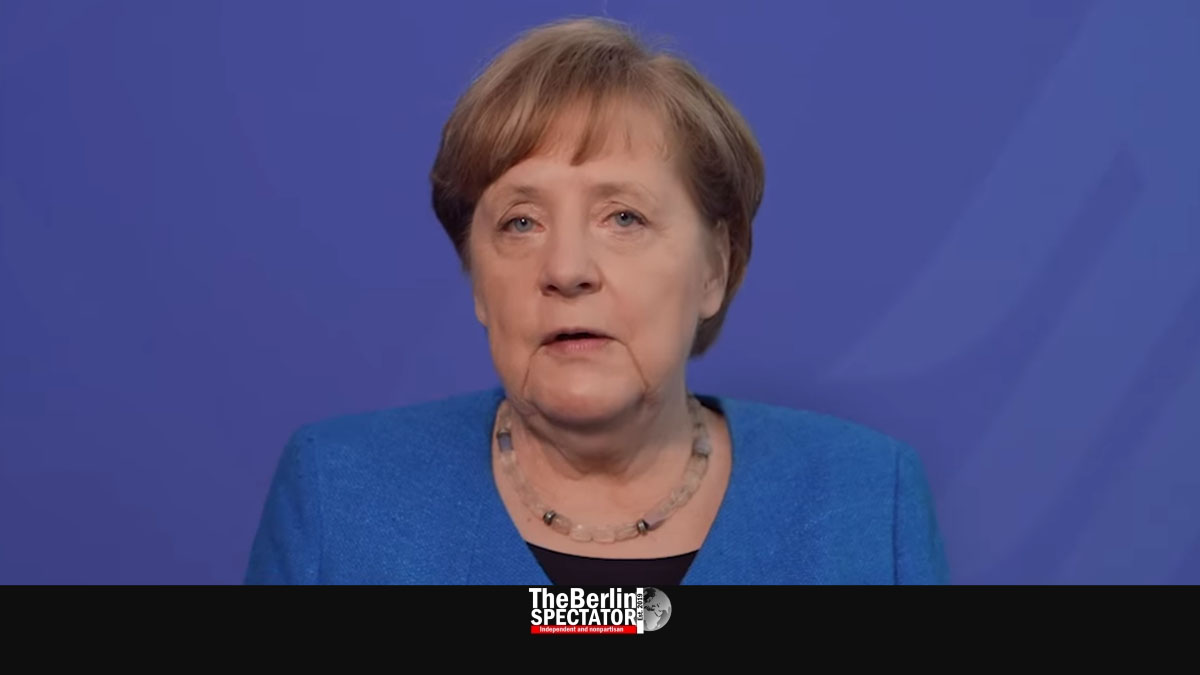 According to Angela Merkel, the new, stricter Corona rules for counties with high Incidences are urgently required. Her government is now working on an entry ban for persons who intend to come in from India, because of a new Corona mutation.

Berlin, April 25th, 2021 (The Berlin Spectator) — In her regular podcast, Angela Merkel said the third wave had hit Germany and “the more contagious virus variant” had prevailed. She meant the Corona mutation known as B.1.1.7 or “British variant” because it first appeared in Britain. The Chancellor said she was convinced the amendment to the Infection Protection Act had been necessary. Now, citizens and state administrations knew what had to happen when the Incidence Numbers climbed above 100.

The numbers of new infections and ICU patients were high, Mrs. Merkel said. Doctors and caretakers were sending out “actual cries for help” in a deteriorating situation. Therefore, the state, society and the citizens needed to help. The “emergency brake” law was extremely important. Slowing down the third wave, stopping and reversing it was the objective. Another goal was to get the number of new infections down to a level the local health authorities could deal with. Getting back into a situation in which Corona rules could be eased again, as quickly as possible, was a main objective as well.

Angela Merkel conceded the measures included in the “emergency brake” were tough. She said she and her colleagues in the government, the Bundestag and the Bundesrat had been aware of this fact all along. The amended law forces counties with Incidences above 100 to put in place several measures, including curfews between 10:00 p.m. and 5:00 a.m. and tight contact restrictions. Many have criticized the “emergency brake”, including a bunch of German actors who ridiculed it in videos.

The new measures were the only way. Great Britain, Ireland, France, the Netherlands and Portugal had shown that countries could get extremely high Incidences down by putting in place clear restrictions everyone understood, and by limiting contacts consistently. So far, no country had managed to break the third wave without putting in place harsh measures, including curfews, the Chancellor stated.

Testing people for Corona was the way to make the “controlled and sustainable easing of restrictions” possible in conditions with low Incidences. And Germany’s vaccination campaign, which was being accelerated more and more, was the key to overcoming the pandemic. “I am convinced that an easing of restrictions, step by step, will be possible in the foreseeable future if we manage to decrease the number of infections quickly”, Chancellor Angela Merkel said.

The “emergency brake” kicked in on Friday at midnight. Right now, it applies in 353 out of 412 counties in Germany. In 59 cities and counties, the Incidence has dropped below 100 or never reached that level. Schleswig-Holstein in Germany’s north-west is the only federal state which has not exceeded 100. Two states, Thuringia and Saxony, are still above 200.

In the meantime, Germany is working on an entry ban for travelers from India because of the terrible Corona situation there. It involved a new Coronavirus variant which seems to be more aggressive than those Germany has seen so far. From Sunday at midnight, only German citizens and individuals with residence permits will be allowed to enter Germany from India. They need to get tested for Corona before they board the plane and go into 14-day quarantines once they arrive. Germany’s Health Minister Jens Spahn said the government was worried about the Corona mutant identified in India.