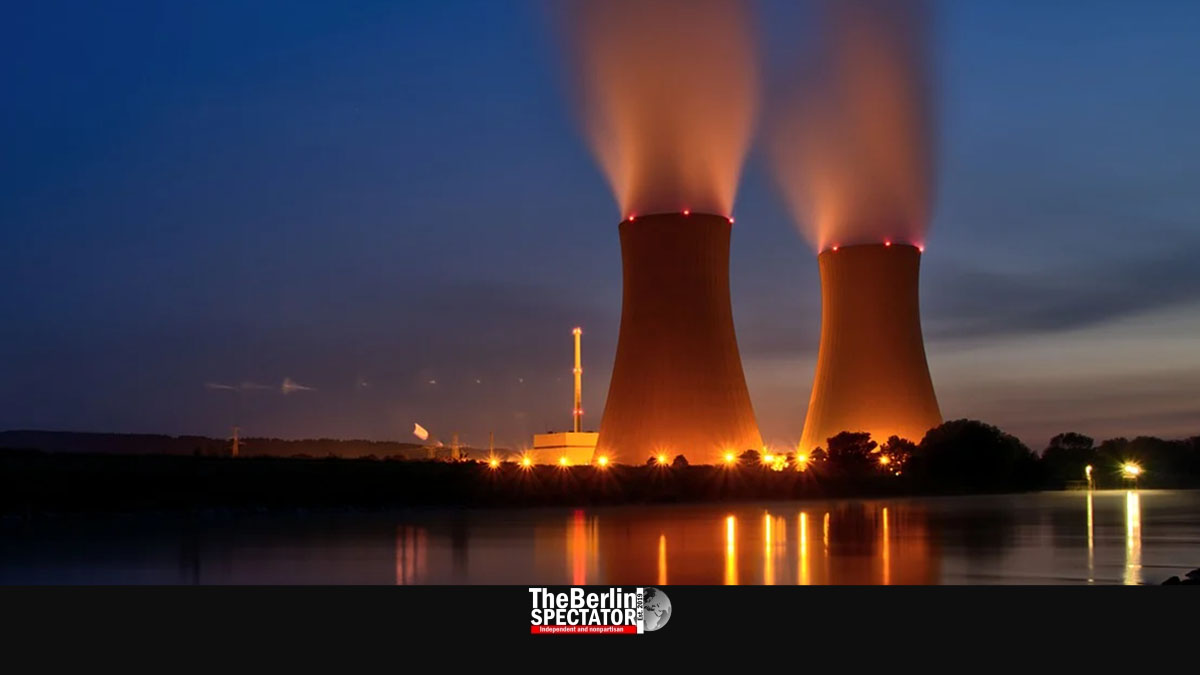 Next year, Germany’s last nuclear power plants will be switched off for good. The three 2011 meltdowns in Fukushima made Chancellor Angela Merkel change her mind about an energy source that was supposed to be the safest of them all. It was not her first shift of opinion in this context.

Berlin, April 26th, 2021 (The Berlin Spectator) — West Germans who switched on their TV sets on April 26th, 1986, were told about an accident at the Chernobyl nuclear power plant in the Soviet Union. Their Interior Minister at the time, the late Friedrich Zimmermann, spread inaccurate information according to which the disaster near Kiev did not pose any threat to the population in Germany. Only a day later, people in the Federal Republic were asked to stay indoors as much as possible and close their windows. Being outdoors in the rain was supposed to be avoided.

Once in a Million Years

The explosion and meltdown that took place only 1,391 kilometers (865 miles) from Hamburg would definitely affect all of Europe. While Germans were worrying about their health, fire fighters and workers who were fighting the flames at the Chernobyl reactor, were dying. It was the first complete meltdown of an NPP, the kind of event that was supposed to take place once every one million years, according to scientists who were employed by West German operators of NPPs.

Did the terrible event in Chernobyl, which took place 35 years ago today, have any consequences for the West German nuclear power policy? No. The energy industry was building new NPPs, and the Bonn government supported those projects, including the construction of the plant in Brokdorf near Hamburg. The arguments opponents of nuclear power kept on repeating were simply ignored. Protesters who demanded an end to nuclear energy in West Germany were sprayed with irritant gas and kept away from the construction site in Brokdorf with water cannons. Six months after the Chernobyl disaster, the Brokdorf NPP was fired up for the first time.

Eight years and one month earlier, a reactor in the United States of America partially melted down. The fact that the accident in Three Mile Island, located in Dauphin County, Pennsylvania, was not a lot worse had to do with pure luck. As it turned out, major disasters in NPPs did not happen every one million, but every eight years. Still, governments all over the world ignored this slight difference, and many still do today.

Thirty-two years after the Three Mile Island accident, and 25 years after the disaster in Chernobyl, Angela Merkel switched on her TV set. As the Chancellor of the Federal Republic of Germany, a pretty demanding job, she did not really have the time to watch soap operas. What Mrs. Merkel watched on March 11th, 2011, was disturbing, to say the least. The former Environment Minister witnessed explosions and meltdowns in as many as three reactors. So, instead of one meltdown in one million years, there were a total of four and a half of them in 32 years.

This time, the government of the Federal Republic of Germany did care. During her first grand coalition with the Social Democrats, Angela Merkel had agreed to a phasing out of nuclear energy a few years prior to the triple disaster in Fukushima. Then, in a coalition she ran with the pro-business party FDP, there was a phase-out of the phase-out, meaning nuclear energy was clean and safe again, all of a sudden. But when that footage from Fukushima flickered across the Chancellor’s screen, she had enough and took yet another 180-degree turn.

Thanks to Angela Merkel, and mainly to those who fought nuclear power for decades, the last few NPPs in Germany will be switched off next year, in 2022. But, of course, this will not be the end of all the problems or to the danger posed by nuclear energy. First of all, some of Germany’s neighbors rely on nuclear power. The number of NPPs France is operating is higher than that of croissants on a typical breakfast table at Élysée Palace. By the way: Radioactivity set free during meltdowns does not stop at borders.

Secondly, the problem of nuclear waste has still not been resolved, just as opponents of nuclear energy had predicted 50 years ago. What a surprise. Yes, nuclear waste remains an issue even after a country shuts down all of its nuclear power plants. Actually, there will be even more of it in a situation like this one. The problem about nuclear waste deposits is the fact that they have to be safe for hundreds of thousands of years, due to the long half-life period of the radioactive material involved.

In Germany, so-called ‘temporary nuclear waste storage facilities’ that were supposed to offer this kind of safe environment drowned in groundwater after a few years. The consequence was that dozens of containers with radioactive waste were submerged like sea treasures. Yet another issue with nuclear waste in Germany is the fact that the biggest fans of nuclear energy do not want any nuclear waste in their own federal states.

Oh, we almost forgot the main question. So, how do you strip down a nuclear power plant? Well, first you compensate the operators by sending them truckloads of cash. Then you pull down all non-radioactive parts of the plant, including the turbine, the administrations building and the shed which accommodates lawn mowers and brooms.. No, you won’t need those anymore.

Losing the nuclear fuel rods and the reactor pressure vessel is a little more difficult. First, you wait for several years, until the radioactivity has declined a little. Then you take it all apart and squeeze the parts into “safe” containers you do not have a safe place for. Those will contain heavily radioactive material as well as parts of the plant which are mildly radioactive. The next problem: Even before you dismantle the reactor, you will need a lot of external energy to cool it down. That is because the plant will not produce its own electricity anymore. But the reactor core will still need to be cooled down for years. This is how you prevent a meltdown in your own backyard.

There are quite a few NPPs to strip down in Germany. The end of nuclear energy is only 20 months away. Let’s roll.