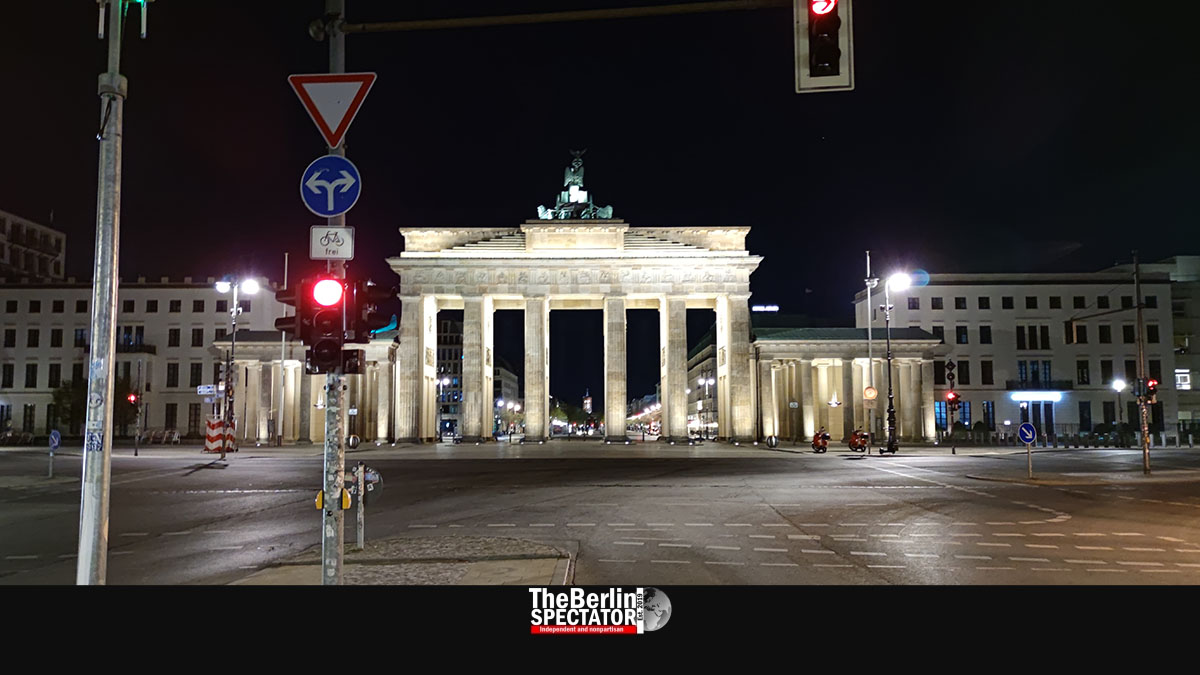 Is this actually Berlin? It does not feel like it. Not with those new curfews. This situation, experienced during a nightly bicycle ride, is surreal.

Berlin, April 27th, 2021 (The Berlin Spectator) — Even villages are louder. At least there would be some cow mooing in the distance. Not in Berlin. Germany’s largest city, with 3.8 million inhabitants, was dead last night. It was so quiet you could hear a pin drop. The only noise audible at 2:00 a.m. was caused by my bicycle tires on the capital’s streets. Now and then, a vehicle overtook me. There was a taxi here and there, or an empty bus.

Berlin’s biggest intersections are usually busy 24/7 and 365 days per year, but not in the early morning hours of day number 455. On day 0, the first Coronavirus infection in Germany was confirmed, on day number 453, the ’emergency brake’ law, which includes nightly curfews in all cities and counties with Incidences higher than 100, kicked in. Between 10:00 p.m. and 5:00 a.m., people are not supposed to leave their homes. Between 10:00 p.m. and midnight, they can still take a night walk as long as they do so alone.

At Hermannplatz, an infamous square in Berlin’s Neukölln district, two homeless persons prepare their sleeping bags at about 1:30 a.m.. They sleep right in front of the Karstadt department store every night, no matter whether there is a curfew or not. One young couple is walking down the street. These two people do not seem to know about the curfew, or they do not give a damn. The bus driver who is waiting for the right time to get going again at the same location definitely knows. It is his job to keep the public transport system alive. Even though he might not have passengers until 5:00 a.m., he has to move around, in case a nurse or doctor needs to get to work or back home, after a long day at the COVID-19 ward.

Guards at the Gate

But between the square and Brandenburg Gate, a distance of 5.3 kilometers (3.3 miles), I meet absolutely nobody. A total of six vehicles drive by during the 20 minutes this little bike trip takes me. In the middle of Pariser Platz, the square in front of Brandenburg Gate, four guards in police uniforms enjoy a smoke together and have a chat. Two of them are supposed to watch the French embassy, while the others seem to be responsible for the American one on the other side of the square.

A few steps down the street, in the government quarter, some pitiful police officers have a difficult task, which is staying awake while guarding the Reichstag all through the night. Because it is a rather fresh night, they restart the stinky Diesel engine of their police van the moment I ride by, in order to warm up a little. Since absolutely nobody is on the street, except for this one reporter on his bicycle, they parked their van right in the middle of the intersection of Ebertstrasse, Scheidemannstrasse and Dorotheenstrasse. That way they will not miss any suspicious cars that might drive by. There are more police officers between the Reichstag and the Chancellery. To them, I do not seem to look too suspicious. At least they do not stop me.

Central station, one of Berlin’s busiest places in more normal times, is empty. Between 2:00 a.m. and 2:58, not a single train is scheduled to go anywhere. Deutsche Bahn is required to keep things going, just like Berlin’s public transport. But, right now, absolutely nothing is going on. Two gentlemen are cleaning the station’s 14 platforms on four levels, one by one, with a giant vacuum cleaner on wheels. Apart from them, I see three persons in the entire station. One individual seems to be typing messages on his i-pad, two homeless men are walking around. They do not really seem to care what direction they are taking, as long as they keep warm in this giant station.

Cycling back to Neukölln felt absolutely surreal. Never in my life have I been in a city this quiet. In normal times, there are always some people who return from parties, no matter what time it is. Before the nightly curfews were put in place on Saturday, some people were always on the move on bikes, in cars, or on foot. Not last night. On the one hand, cycling through this empty city felt like being part of a bad horror movie, in which zombies would come around the corner any minute now. On the other hand, the fresh air and the unbelievable quietude actually felt good.