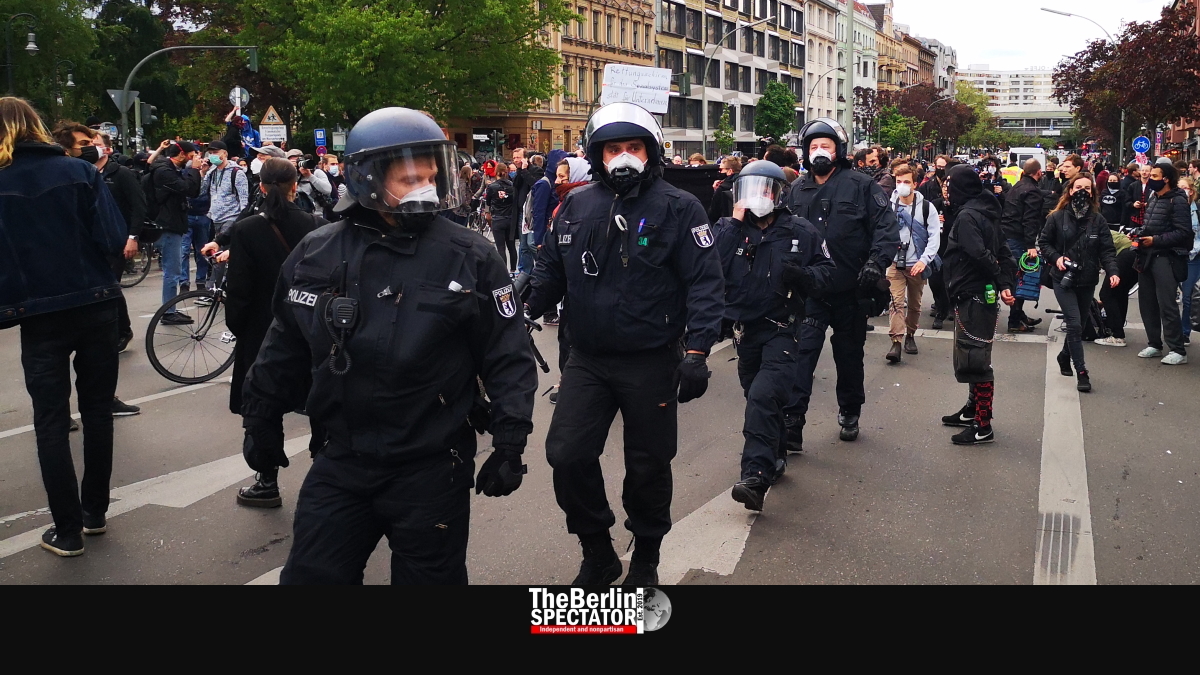 Yet again, the Berlin Police Department will need help. Dozens of protests have been registered for May 1st. The most dangerous Labor Day rallies are the ones organized by the radical left.

Berlin, April 29th, 2021 (The Berlin Spectator) — In Berlin, everyone will be on the street on May 1st, which is Labor Day in many European states. As of Thursday at 8:30 a.m., as many as 42 protests were registered for the big day. One thing is certain: The Berlin Police Department will not manage to deal with all of them without help. It looks like the Federal Police and officers from other federal states will have to help.

On a regular day, getting backup is not a problem. On Labor Day, things are different, because protests will take place in all large cities. This might mean that states which accommodate more cows on pastures than people in cities will have to help. States like Mecklenburg-Hither Pomerania could be in the position to send cops to the German capital. Because of Berlin’s size and its status as the capital, its Police Department frequently needs help. There are around 5,000 protests in Berlin each year.

Many of the 42 protests registered for May 1st will definitely be peaceful. Those include two demonstrations in front of the Chinese embassy against the way the members of Falun Gong are being treated in China. A protest against Russia’s President Vladimir Putin, which has been going on for weeks, will probably be peaceful. So will the one at which far-left participants intend to demand good relations with Russia.

There will be lots of demonstrations on May 1st the police will not have to worry about too much, including one against the rising rents in Berlin, one against Corona deniers and one staged by a bunch of misguided individuals who want the elected Chancellor of the Federal Republic of Germany to “step down immediately”. There is one rally for improvements in Germany’s education policies and one staged by freelance journalists who fear they might be kicked out by the RBB, Berlin’s and Brandenburg’s division of the ARD radio and TV network.

On top of it all, there will be one Black Lives Matter protest, one for the reopening of cultural venues, another one stages by shipping companies that want the permission to transport people on the river Spree again, and even a satiric protest entitled “Reptiloid World Reptilion”. And this is only part of the list. None of the demonstrations mentioned so far really worry the authorities. Neither do the traditional Labor Day protests organized by unions and left-wing parties.

But there is the “Revolutionary May 1st Protest” which is always being staged by extremist left-wingers (read separate feature Berlin: ‘Revolutionary May 1st Protest’ to Take Place in Spite of Corona). In the past decades, this protest has led to violence many times. In the late 1980s, the situation escalated badly. Since, the police have improved their approach. The latter consists of de-escalation strategies and containing these protests with an overkill of police officers in riot gear.

But the “revolutionary” protest could be just one of several problems. The Berlin Police Department believes unregistered protests might take place, with participants who might be prepared to use violence. Those might be staged spontaneously. The next issue Berlin fears: Radical Corona deniers might have to be held at bay. May 1st will not be a boring day. How violent and dangerous it will turn out to be remains to be seen.