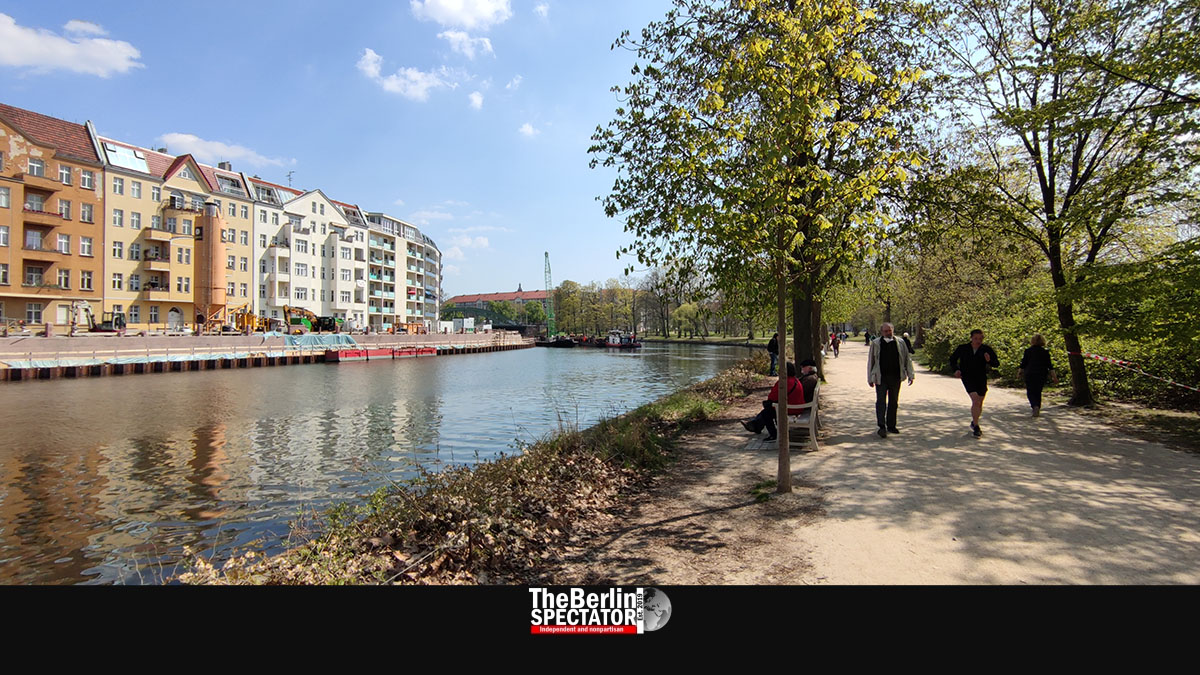 Berlin has hundreds of parks. But only one of them is as elegant as the Charlottenburg Palace Gardens. They are just the right spot for those who insist on forgetting about the Corona crisis for a little while.

Berlin, April 30th, 2021 (The Berlin Spectator) — The Charlottenburg Palace Gardens will never be surpassed in regard to their elegance, except maybe by Sanssouci Park in Potsdam. It all started with a village called Lietzow. Three hundred and twenty-six years ago, on June 30th, 1695, it was given to Sophia Charlotte of Hanover, as a compensation for a country estate she had returned to her husband Friedrich III. It is not a coincidence that this place, which is a Berlin borough today, was renamed Charlottenburg in 1705, after the early death of the Queen consort in Prussia.

In the late 17th century, the village already included a summer residence. Over time, the small residence turned into a big one. Then, the residence became a small palace. The latter got a separate opera house, an orangery and a dome. At some point, the servants got two side buildings which were connected to an extended version of the palace years later. Step by step, the building developed into what is known as Charlottenburg Palace today. During air raids in 1943, it was damaged badly. After the war, the reconstruction began. In 1957, the palace’s dome was repaired.

Charlottenburg Palace was one of Berlin’s main sightseeing spots until Corona destroyed tourism in 2020. But Berliners love going there too, also because of the nice park behind it, which is known as Charlottenburg Palace Gardens. Whew, we finally got to the part we wanted to reach. Even hundreds of years ago, these gardens were the prototype of elegance, as an old drawing from the year 1700 proves. Sophia Charlotte’s gardeners must have spent a lot of time planting flowers, cutting hedges and keeping the whole thing in excellent shape, back then, when the palace was still tiny and cute, and when it was protected by a forest on its southern side, where Spandauer Damm, a major traffic artery, is located today.

Before Corona, the area between that street and the palace was turned into a nice Christmas market every year, in late November. As opposed to the dozens of other Christmas markets Berlin had before the pandemic, this one used to have a lot of space, and just the right atmosphere, thanks to the lit palace next to it. Especially in spring and summer, the Charlottenburg Palace Gardens on the northern side of the impressive building are the place to be.

On one of the few sunny days in late April on 2021, countless dog owners were using plastic bags to clean up after their four-legged companions. Even more mothers pushed strollers up and down the alleys, in order to give their babies some good air and quietude. The latter was interrupted for a while, by a guy with a get-out-of-my-way attitude who wore sunglasses and headphones and was sitting on a big, self-propelled lawnmower. Maybe he was listening to Ted Nugent or some ‘Death Metal’ band during his shift on those big lawns, or maybe it was Édith Piaf. We will never know.

Somewhere in between those hundreds of flowers and the hedges which are still being trimmed by professionals, 321 years later, there is a nice ‘Palace Fountain’ and a big carp pond. Ducks and bigger birds of an unknown breed use it as their personal swimming pool. Just sitting there, looking at it and doing nothing is a popular activity. Especially in the tense atmosphere the Corona crisis, those deniers and chief critics are causing, a spot like this nice park with its pond and ducks is just the right place to go, in order to forget about the pandemic for a few moments.

There is even more water, since the Charlottenburg Palace Gardens are located right next to the river Spree. During those nice walks they take, people can watch all of those boats pass by, in normal times. Right now, those tourist boats are at anchor. Further north, a playground in the woods will enthuse kids up to 12 years of age. A few dozen sheep consumed a lot of grass on one of the many pastures there the other day. Since they were still unfleeced and seemed to feel hot, many of them just enjoyed a siesta in the shade when our reported shot them at close range, with the camera built into his Chinese-made cell phone. Closer to the palace, a gentleman from Moscow wanted to know all words the passer-by knew in Russian. He got six of them: Spaciba, pajalsta, glasnost, perestroika, gavno, durak.

Because of Corona, Charlottenburg Palace with its baroque decorations cannot be entered these days. In normal times, it opens Tuesdays to Sundays from 10:00 a.m. to 5:30 p.m.. People who like porcelain should definitely go there, but leave their elephants at home. The Mausoleum, the Belvedere and the New Pavillion in the park are closed as well. The same applies to the restaurant and café in the former orangery. But the statue of Friedrich Wilhelm I can be admired even during this crisis.

The only downside at this wonderful park to the north of the palace is the fact that far too many individuals seem to be using its bushes as bathrooms. Staying on the official paths is a good idea. The Berlin Spectator’s reporter learned it the hard way. He had to clean his right shoe in the tiny creek the park features as well.

We have a request: The Berlin Spectator has been online for 28 months. We deliver the most relevant news from Germany along with features about Berlin, culture, people, tourist magnets and other subjects, and we garnish the whole thing with entertainment and other extras. The Berlin Spectator thanks the thousands of readers we have every day.
But we also need support. Would you consider supporting The Berlin Spectator? You can do so directly via Paypal or you can go to our Donation Page first. Thank you so much.