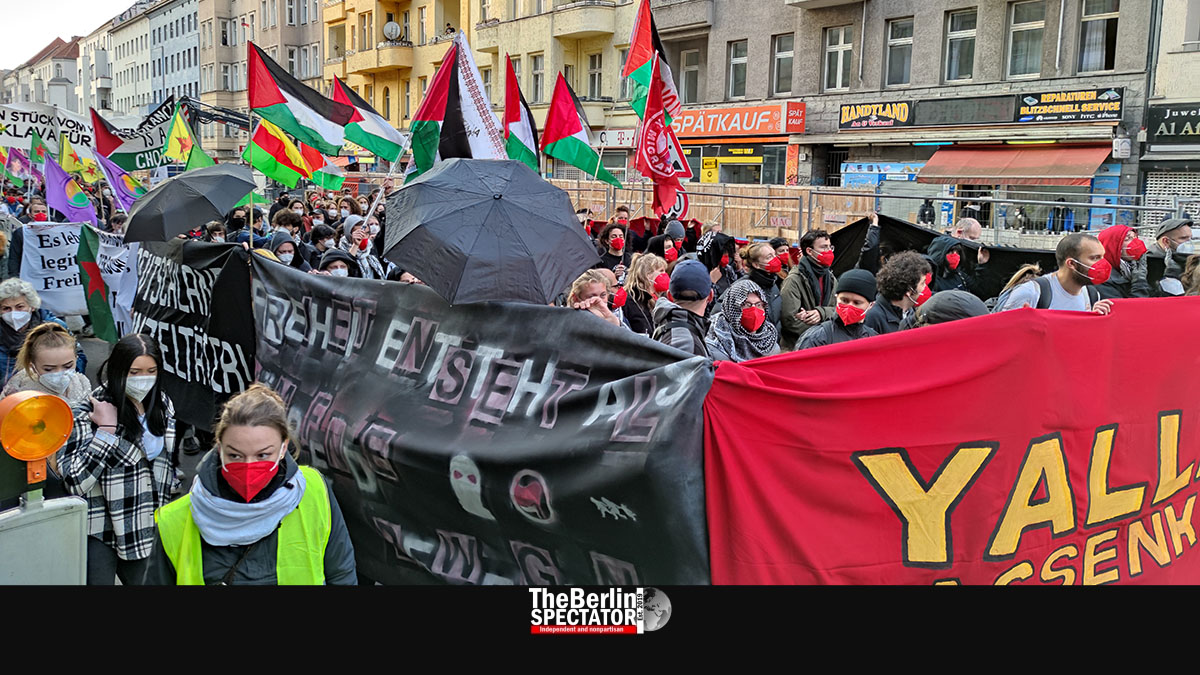 In Berlin, dozens of protests were staged today. They included rallies organized by unions, the radical left, Putin critics, and Corona deniers. The first part of the day passed without incidents. Later, violent protesters clashed with the police.

Berlin, May 1st, 2021. Update: May 2nd, 2021, 7:03 p.m. CEDT (The Berlin Spectator) — May 1st started with a traditional Labor Day event organized by the DGB, the umbrella organization of Germany’s major unions. Its chairman for Berlin and Brandenburg, Christian Hossbach, said the Berlin Wall that had stood right behind Brandenburg Gate had fallen 31 years ago, but another one was still standing. He was referring to differences in regard to the number of working hours per week and salaries between former East Germany and the former West. Equal pay for all has been one of the main demands voiced by most unions for decades.

Because of Corona, the DGB kept its main event as small as possible. But the union did invite representatives of all of its divisions, meaning unions like GOP, VerDi and the IG Metall, but also many high-ranking politicians. Germany’s Family Minister Franziska Giffey was there. So was her colleague, Labor Minister Hubertus Heil. Berlin’s Governing Mayor Michael Müller came to Brandenburg Gate. So did all major candidates for Governing Mayor who want to take over Müller’s job after the elections in fall.

For the Berlin SPD, the main candidate is Franziska Giffey, who intends to trade in her ministry for Red City Hall. Her Green opponent Bettina Jarasch was there, the candidate for the far-left ‘Die Linke’, Culture Senator Klaus Lederer, and even the conservative CDU’s frontrunner Kai Wegner. But none of them held speeches, since Labor Day belongs to the unions. Solidarity was their word of the day.

Just a few steps away, a very different protest took place, one that started on April 10th and lasts for a month. The participants are members of two organizations founded by Russians living in Germany. They accuse Russia’s President Vladimir Putin of being a killer. Behind Brandenburg Gate, they put up large photos of oppositional figures and other persons in Russia who were murdered, incarcerated or poisoned, including Alexey Navalny. He was treated at a Berlin clinic after he survived a Novichok attack in his home country.

In the Kreuzberg borough and other parts of the city, a bicycle protest attracted many Berliners. Thousands of cyclists demanded “a redistribution of property and wealth” and “a system everyone is relevant in”. The protesters were flanked by members of the Berlin Police Department’s bicycle squad. Their colleagues blocked several streets for this rally and protected its participants.

In Lichtenberg, another borough in Berlin, hundreds of conspiracy theorists rallied. They denied the existence of the Corona pandemic and demanded an end to the German government’s anti-Corona policies. Many refused to keep their distance or to wear masks, even though they were ordered to do so by the police. At this event alone, 60 protesters were arrested, according to the Berlin Police Department.

Yet another rally, the ‘Revolutionary May 1st Protest’, commenced in the evening. Thousands of people gathered at Hermannplatz square in Neukölln before they started moving south-east on Karl Marx Strasse. A spokeslady for the police said this protest had gotten the permission to go ahead because the organizers had agreed to cooperate. From a mobile stage with loudspeakers, they asked everyone to keep their distance, which was impossible because of the size of the crowd. Many participants wore masks.

Countless left-wing groups were present at the ‘Revolutionary’ rally. On signs and in chants, some demanded better pay for workers and nurses. Others called for an end to capitalism and a revolution. Yet another group of protesters demanded the salvation of more refugees in the Mediterranean Sea. There were protesters with Palestinian flags who spread the usual lies about Israel. They were in the very front of the protest march and tried to hide behind banners.

Early on, some protesters broke through a construction site fence at Karl Marx Strasse. The police took action against them. Later, a group of police officers in riot gear was attacked. Protesters threw bottles and firecrackers at them. Several officers were injured. Then, things deteriorated further. At about 8:30 p.m., violent protesters clashed with police. Witnesses on Sonnenallee, a major street the protesters marched through, said violent participants had set wooden pallets and trash cans on fire, and the police had lost control of the situation in this area. At around 9:30 p.m., the police ended the rally.

This outcome was to be expected since many radical groups were part of the demonstration. Also, a lot of alcohol was consumed from the start. In the late evening, a police helicopter circled the airspace above the ‘Revolutionary Protest’. Hundreds of cops on duty had come from several federal states to help their colleagues in Berlin. Some had to drive 800 kilometers (497 miles) from Freiburg to the German capital. They will be returning on Sunday.

The total number of arrests on May 1st, 2021, in Berlin was 354. Police Chief Barbara Slowik called the attacks against police officers “unacceptable”. But most demonstrators had shown that it was possible to protest and follow the Corona rules at the same time. A total of 30,000 people had taken part in various protests on Labor Day. As many as 93 police officers sustained injuries, according to Berlin’s Senate Administration of the Interior. After the protest, many former participants stayed outdoors in groups in spite of the nightly curfews that were put in place to curb the third Corona wave. Again, the police needed to become active.

On Sunday, Berlin’s Interior Senator Andreas Geisel thanked all responsible protesters. The actions of individuals ready to resort to violence should not discredit peaceful participants, he stated. “May 1st is a day of plurality of opinions. Of course, both freedom of speech and freedom of assembly apply in the pandemic too”, Senator Geisel said. “But violence, brainlessness and agitation have no place in this city.” He also thanked the Berlin Police, the Federal Police, all officers from other federal states who helped Berlin, and the fire fighters who were on duty.

Governing Mayor Müller strongly condemned the violent attacks against the police as well. Those responsible had traded on the tense and difficult situation, a statement sent out on Sunday afternoon read. By doing so, they had put peaceful protesters in harm’s way. Müller said he had a lot of respect for the police and the emergency personell.

Angela Merkel had things to say on Labor Day as well. She thanked employees all over Germany for their service and patience in the Corona crisis. “Especially professions that do not get a lot of attention have kept the country running”, the Chancellor said. For instance, truck drivers and supermarket employees had made sure there had been enough supply during the first Coronavirus wave a year ago. “Thank you for your commitment in the most difficult time our country has experienced in generations”, Mrs. Merkel said.