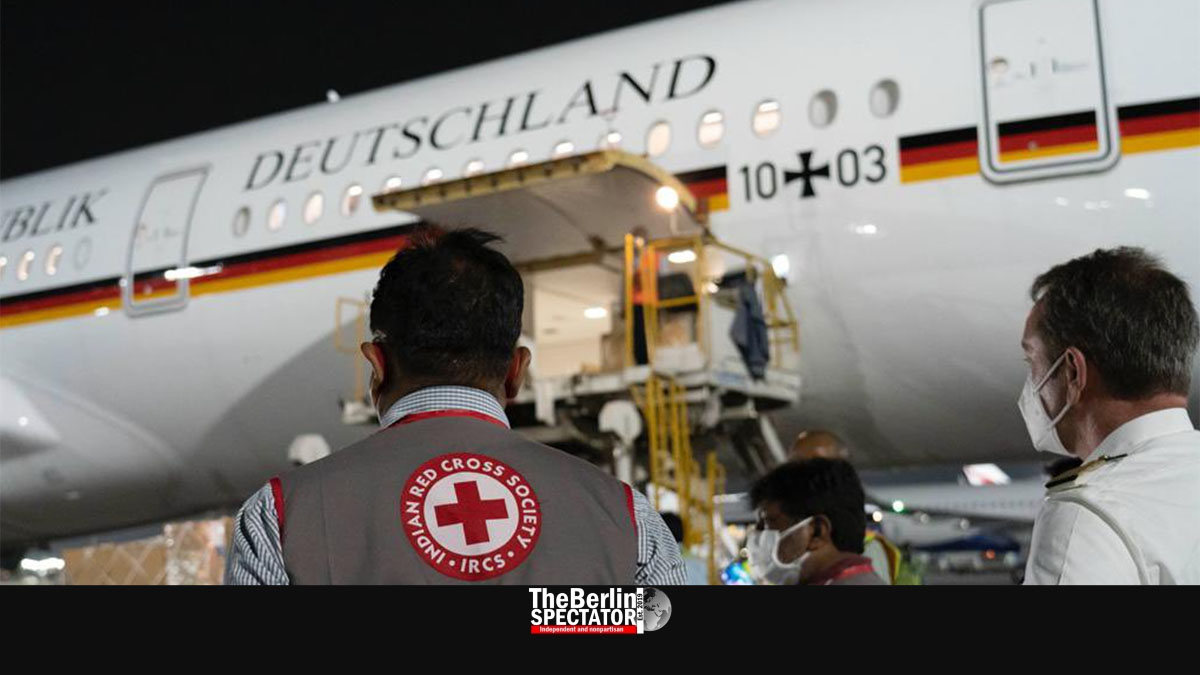 Germany just started an aid mission for India. Thirteen soldiers landed in New Delhi last night. They brought along respirators and medication. An oxygen machine is to follow.

Berlin, May 2nd, 2021 (The Berlin Spectator) — The German Air Force has brought badly needed respirators to India, where the Corona situation is horrible. A new Airbus A350 government jet the livery of which says ‘Bundesrepublik Deutschland’ (Federal Republic of Germany) took off on Friday and reached New Delhi last night. At the airport, the medical devices and medication were handed over to the Indian Red Cross by Walter Lindner, the German Ambassador to India.

One hundred and twenty respirators were on board the aid flight and an unknown amount of medication that is supposed to help Corona patients. Thirteen German soldiers were taken to New Delhi as well. Their task is to set up a machine that makes oxygen the parts of which will be flown to India this coming week. A lack of oxygen in India’s hospitals has led to the deaths of thousands of people there.

According to the Defense Ministry in Berlin, the protection of the soldiers who were sent to New Delhi has the highest priority. That is why hygiene and prevention measures are in place on site. Besides, the team members were vaccinated against COVID-19. An emergency doctor and a medic are part of the team, just in case. When the German helpers arrived at Indira Gandhi International Airport, they were tested for Corona infections immediately, as a precaution.

The technicians who are part of the team the ‘Bundeswehr’, Germany’s armed forces, sent to India will now start preparing for the activation of the oxygen machine. Later, they are supposed to show Indian hospital staff members how to operate it. The Germans will be staying in India for two weeks for this purpose.

Germany’s Defense Minister Annegret Kramp-Karrenbauer tweeted a photo of the aircraft before it left. She described the mission and thanked everyone involved “for this mutual effort”, including the Ministry of Health. This is not the first Corona crisis aid mission Germany started. Just a month ago, respirators were flown to Brazil. A long aid mission in Portugal which involved doctors ended in March. Germany also helped European countries, including France and Italy, by accepting Corona patients from there in its hospitals.

The giant oxygen machine is supposed to be flown from Germany to India on two Airbus A400M freighters owned by the Air Force. While this machine cannot resolve the terrible Corona situation there, it will benefit some patients. Chancellor Angela Merkel had announced help for India on Monday. Forty other countries have said they would help India too.