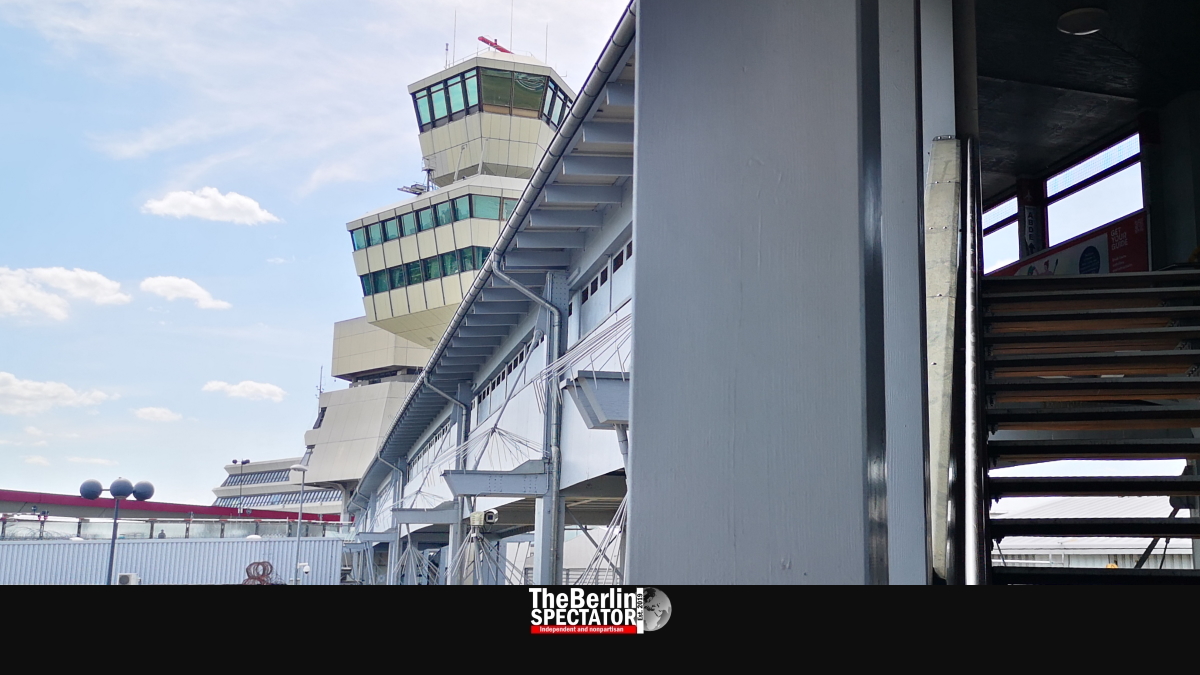 In Berlin, a former airport will lose its status as such on Wednesday. Parts of Tegel Airport were already flattened. Now, the demolition process will enter its next stage.

Berlin, May 3rd, 2021 (The Berlin Spectator) — Since the word “sexy” is not politically correct anymore, especially in regard to women and in Berlin, let’s state the following: Those Air France stewardesses on the last flight that took off from Tegel on November 8th, 2020, were handsome. This does not sound emancipated either. So, let’s just retract the whole thing. But one aspect cannot be denied: They were there, half a year ago, on the last day Tegel Airport was actually an airport. At least we thought this was the end.

But the Germans would not be Germans if they did not have a million rules about absolutely everything, including decommissioning airports. As it turns out, Tegel Airport has still been what it was built for seven decades ago, since it was replaced by the new BER Airport in Brandenburg last year, namely an airport. It had to be ready, just in case. If BER had not been able to cope with the three passengers who were courageous enough to fly during the Corona crisis, Tegel would have taken over again. It did not happen. What a surprise.

Those German rules also say that the transition period ends after six months, meaning Tegel Airport will finally cease being an airport on Wednesday, May 5th, 2021. It’s over. Ça y est. Se acabó. Das war’s. Since November 8th, security officers and other staff members had remained on site. Better safe than sorry, right? Those people needed to be paid every month. The amount of 250,000 Euro (300,499 U.S. Dollars or 217,493 Pounds Sterling) the airport operator FBB made by auctioning off those benches, fire engines and snowplows (British English: snowploughs) that were used in Tegel probably covered the salaries, but not all of the costs that piled up.

Since those kind French stewardesses climbed the stairs to their A320 in high heels in fall, a lot has happened. Terminal C, which had been used for low-cost airlines, was already taken apart. Now that the airport is not an airport anymore, even more parts can be put through the meat grinder, including the weather station. Of course it will take several months to turn over all remaining buildings at former Tegel Airport to the state-owned company Tegel Projekt GmbH, because they will do so one by one. Why do it in one go when the complicated version is a lot more complex?

Once the process of turning over the whole enchilada is completed, probably in the year 3000, Tegel Projekt GmbH can start doing its job. The latter consists of turning the former airport into a technology and research center. Instead of gifted French stewardesses and arrogant pilots with their golf tans and mafia sunglasses, scientists holding test tubes with fluids in all colors of the rainbow will walk through the corridors, just before they invent the next wheel, fridge or a new generation of electric tooth brushes.

So, Tegel Airport will not exist anymore later this week. In case you insist on putting your big Boeing on the tarmac there, you will have to take it apart first and ship it there in parts. That is because no aircraft will be allowed to land anymore. One day, maybe in the year 6000, archaeologists will find Tegel buried under 50 feet of sand. They will probably not believe it ever was an airport because of all the test tubes and scientific Powerpoint presentations they will find.