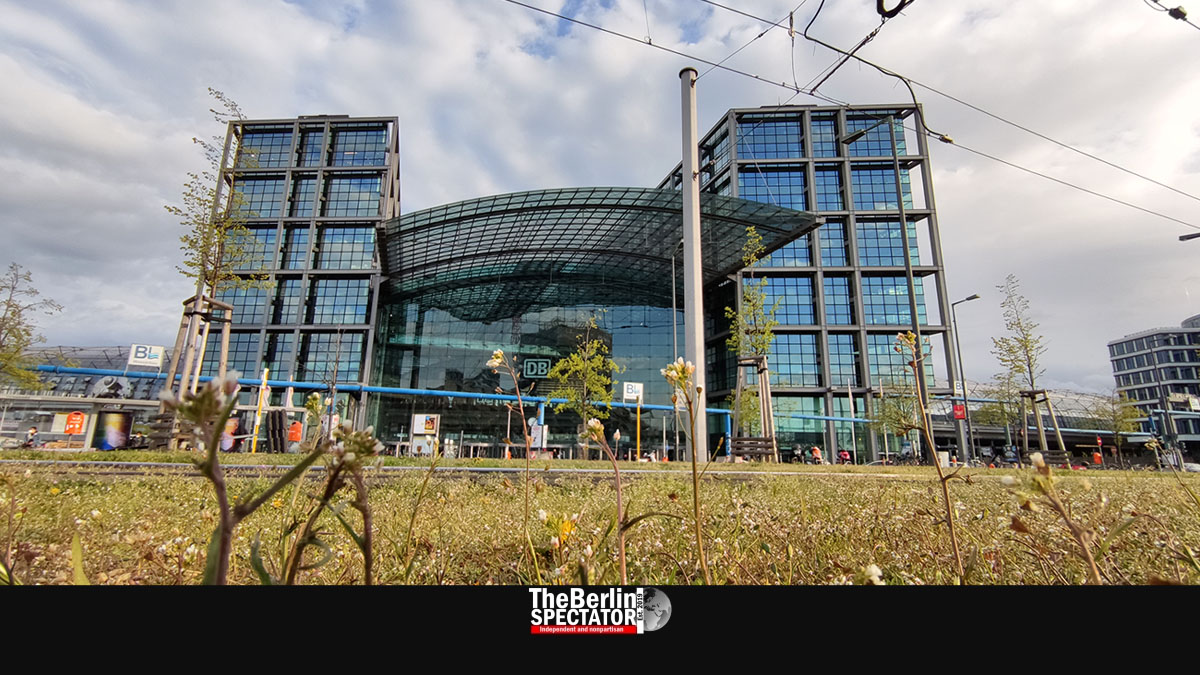 Fifteen years ago, Berlin’s central station was inaugurated. It is a giant construction with five levels and train tracks in all directions. Designed by the architect who developed Tegel Airport, the German capital’s ‘Hauptbahnhof’ is nothing less than stunning.

The German language offers long words hardly anyone from abroad can pronounce. One of those is ‘Hauptbahnhof’, which stands for central station. ‘Haupt’ means main, ‘Bahn’ is the word for railroad and ‘Hof’ would stand for yard if it was not connected to the ‘Bahn’ part. A ‘Bahnhof’ is a train station. Berlin was going to name the station after ‘Lehrter Bahnhof’, its predecessor. The Berliners even supported that name when they were polled in 2002, four years ahead of the inauguration. But Deutsche Bahn, Germany’s largest railroad company, called it ‘Berlin Hauptbahnhof’ anyway.

After Germany’s reunification, Berlin’s urban planners were convinced the city would have 6 million inhabitants in no time. So, they opted for a massive station, one that would stand the test of time for longer than five minutes, one that would support a lot of trains in all directions, and one that would impress. They put 700 million Euro (839 million U.S. Dollars or 604 million Pounds Sterling) on the table. The rest is history.

None other than Meinhard von Gerkan designed the station. No, they did not just pick anyone they found in the phone book, but the architect of architects who had designed Tegel Airport decades earlier, as well as airports in Stuttgart, Hamburg, Moscow. Back then, von Gerkan was in the process on working on BER Airport. Trains do not fly, but they move around like snakes. He took this aspect into account, by refraining from adding runways.

Berlin’s central station seems compact when looked at from the north or the south. From the eastern and western sides, it looks like a giant oven with a loaf of bread sticking out. The design includes a reminiscence of the ‘Lehrter Bahnhof’ and the ‘Lehrter Stadtbahnhof’ that used to be located at this very spot. Of course the compact part deceives the beholder. Whatever it might look like: This is the largest interchange station in Europe.

It has five levels, 18 platforms, including two for the ‘U-Bahn’ (underground, subway, metro, tube) on the lowest level, and countless long-distance, regional and local trains on all other levels. The station is 430 by 430 meters (1,410 feet by 1,410 feet) big and counted 329,000 passengers per day in pre-Corona times. On three of its levels, it accommodates 80 businesses including convenient stores, bakeries, restaurants, clothing stores and a pharmacy which works 24 hours per day.

Deutsche Bahn and its subsidiaries have as many as 800 employees on the premises of Berlin’s central station. Germany’s federal police is responsible for the country’s borders, but also the safety of airports and train stations, which is why the station has a station, meaning the train station has a police station. And yes, there is a lot to guard, to maintain and to clean. On its roof, this station even has it own power station, so to speak, in the form of solar panels.

For passengers who intend to travel towards Germany’s north-western part from Berlin, bypassing central station is actually a good idea, especially when they do not have seat reservations. Those who go towards Hanover should board their trains at the much smaller ‘Ostbahnhof’, because that is where they originate from. It will be easier to get a free seat there, on busy weekends or holidays. Travelers who are on their way to Hamburg might want to hop on their trains at ‘Südkreuz’, for the same reason. But passengers who are going south should catch their trains at Berlin’s central station.

From the German capital’s shiny central station, any location in Europe is reachable. Germany’s fast ICE trains race towards Munich, Cologne, Düsseldorf, Frankfurt am Main, Hannover or Hamburg with speeds of up to 250 km/h (155 mph), while regional trains go to small towns all over Brandenburg and the rest of former East Germany, including Rostock, Magdeburg and Dresden. There are trains to Prague, Warsaw and Vienna as well. A FEX airport express train takes flight passengers to BER Airport in Schönefeld. Originally, the ‘Transrapid’ train was supposed to stop here as well, but the entire project was dumped. The only thing Berlin central station lacks is a spaceport. Other than that, it has it all, including stops for countless tram and bus lines right outside its nothern exit.

The sexy station was built right next to the Spree river. Both the Chancellery and the Reichstag are in sight. So is Cube Berlin, a very futuristic and new office building on Washington square, on the station’s southern side. It is even more shiny and elegant than its neighbor, but a lot smaller. There are priceless views, both from and of central station. Walking around in the area with a camera is a good idea.

On May 28th, 2006, exactly fifteen years ago, Berlin’s new central station was inaugurated. Back then, Chancellor Angela Merkel and Transport Minister Wolfgang Tiefensee came in on an ICE train. Several bands played and a “light symphony” was launched, which turned the station into a mixture of a discotheque and a Christmas tree. Since then, the station has been one of Berlin’s main landmarks.

When the new central station opened, Berliners were asking themselves one question: Who is supposed to use it? Nobody except for Angela Merkel actually lives in the vicinity. Today, those tens of thousands of passengers per day answer the question over and over. Because of its geographical location, Berlin does not have the largest airports or train stations in Germany. The central stations in Hamburg, Hanover and Munich are even larger. But none of them is as elegant as this one. Period.