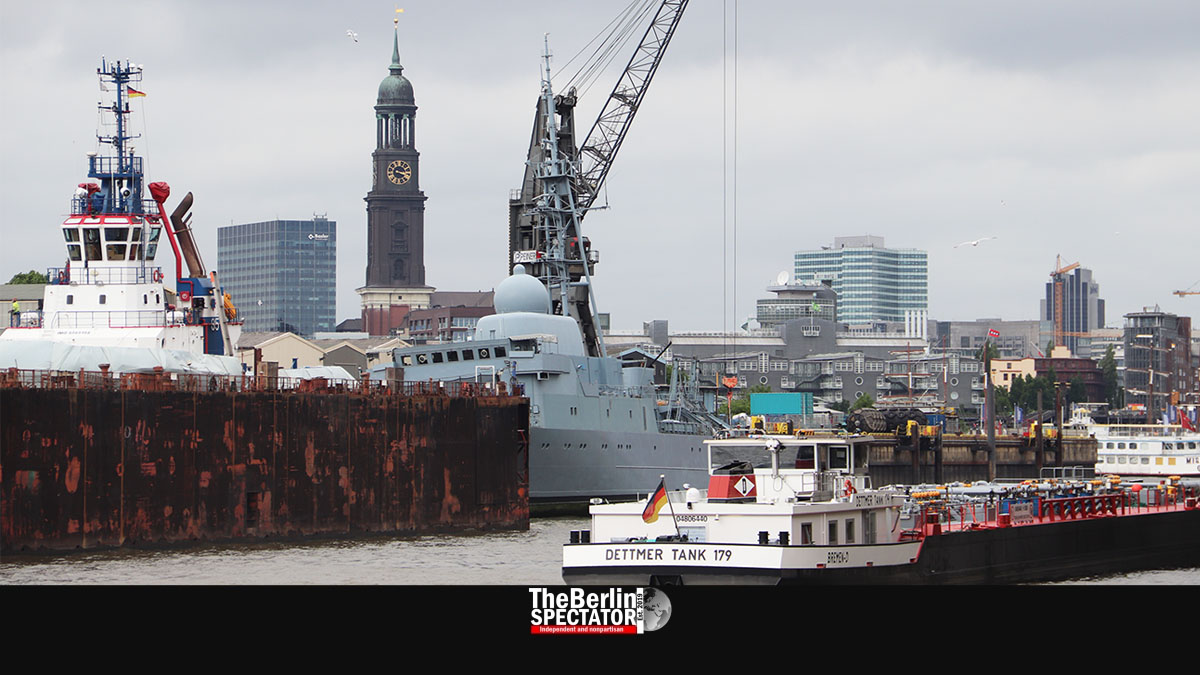 Thanks to Corona, a big birthday, that of the giant Port of Hamburg, has to be celebrated online. For the second time, the real life version of the big party, with hundreds of boats and hundreds of thousands of people Hamburg is used to, needed to be cancelled.

Berlin, May 7th, 2021 (The Berlin Spectator) — There are limits to what the Port of Hamburg can take, because any captain who intends to drop anchor there needs to go up the Elbe river. Some of the largest cruise ships do fit, but not all container freighters. That is one reason why Hamburg does not have the largest, but the the third-largest port in Europe, right behind Antwerp, where ships just have to cover a short distance on the Scheldt river, and the Port of Rotterdam, which has direct access to the North Sea and the English Channel. Still, In normal times, the Hamburgers count 900,000 passengers and more than 9 million shipping containers at their port, per year.

Hamburg was going to celebrate its port’s 832nd birthday today on site, with countless visitors. In pre-Corona times, a million people used to come to those events. They would experience the stunning views the Port of Hamburg offers from the ‘Landungsbrücken’ quay, from the new concert hall ‘Elbphilharmonie’ which was built right into the port, or from tourist boats. Until 2019, there was always a lot to see, including hundreds of participating boats and ships, a million concerts and other events.

Of course, all of those visitors would get hungry at some point and invade Hamburg’s countless expensive restaurants. Tourists booked hotel rooms and went shopping at the posh ‘Jungfernstieg’ and all over the city center. What this means is that the Port of Hamburg’s birthday was not only a great event, but also good business. In comparison, this year’s version of the birthday party will be rather shallow, but things will happen online.

On Friday at 3:30 p.m., Hamburg’s Commerce Senator Michael Westhagemann was going to open the festivities at St. Michael’s Church. This event will be streamed all over the world online, via an invention called the Internet. The same applies to a birthday concert at the ‘Elbphilmarmonie’ and more gigs at other locations. For instance, the Reggae act Guacayo will be playing. The event streams can be watched at hamburg.com, the English version of the city state’s official website.

This year, the port anniversary’s highlights are a ‘Grand Arrival Parade’ and a ‘Tugboat Ballet’ this afternoon. The German version of the same website features video greetings by ship crews from all over the place. For instance, Hamburg’s fire brigade uploaded a clip from one of its ships, with stunning views of the port. The crew of the ‘Hamburg’, a frigate owned by the German navy, sent a greeting as well. So did the crews of several fishing cutters.

The Port of Hamburg is a fascinating place. It combines the usual features of ports with a lot of culture and sightseeing spots. Before Corona, hundreds of people crossed the Elbe river every day to watch shows at musical theaters on the opposite side. Besides, there is nothing better than walking around at ‘Landungsbrücken’ at 6:00 a.m. with a camera.