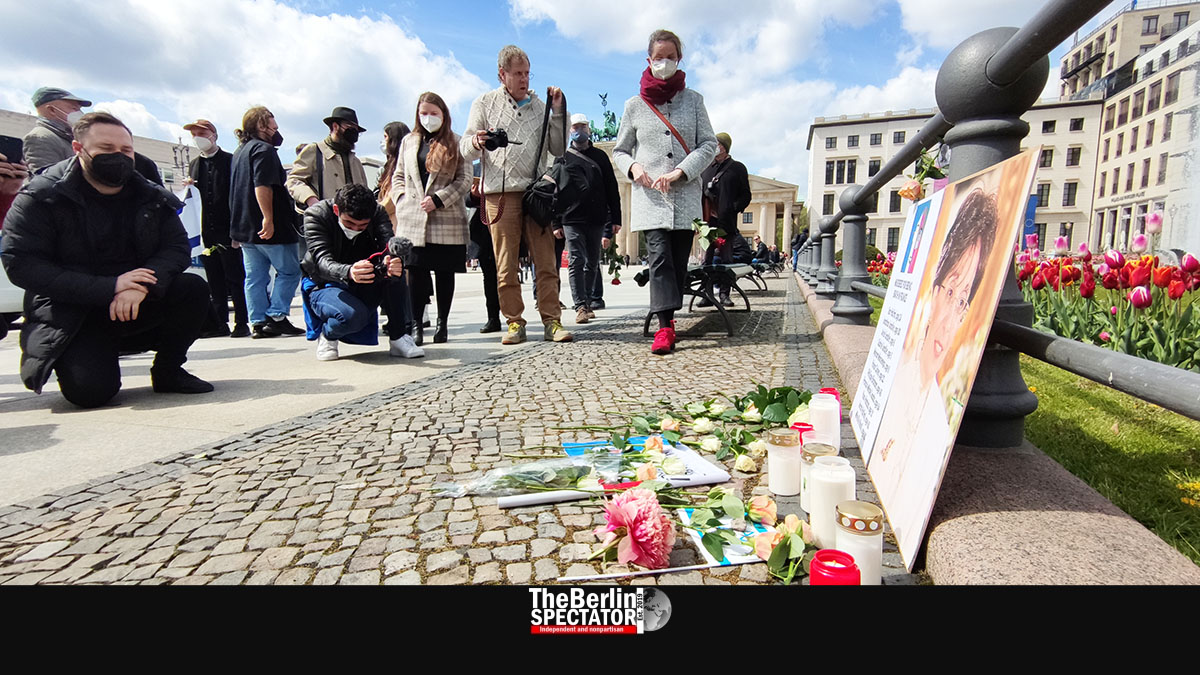 In front of the French Embassy in Berlin, some 80 people commemorated Sarah Halimi on Saturday. She was murdered by an antisemite in 2017. Today’s commemoration also was a protest against a widely criticized court decision in the case.

Berlin, May 8th, 2021 (The Berlin Spectator) — On Saturday, Jewish organizations in Berlin staged an event which was both a commemoration and a protest, in front of the Embassy of France at Brandenburg Gate. The Cour de Cassation, France’s supreme court of appeal, recently ruled that the antisemitic killer Kobili Traoré, a Muslim of Malian descent, could not stand trial for the murder of the Jewish pensioner Sarah Halimi, because he had been affected by his years-long consumption of marihuana. Only after loud criticism, Traoré’s crime was classified as antisemitic. But the culprit was sent to a psychiatric hospital instead of being convicted for his crime. According to medical experts who were heard in court the culprit was going through a psychotic attack when he killed Sarah Halimi, because of his drug abuse.

In France, at least one judge resigned in protest against the decision the Cour de Cassation took. It also triggered big protests in France, Israel and the United States of America. Today’s event in Berlin was the first protest in this case in Germany. Critics see several issues. They believe the court decision created a dangerous precedent and are wondering whether all murderers who drink or consume drugs, including those with antisemitic motives, will get around trials because of the ruling.

At the protest in Berlin, several speakers slammed the French court decision. For the organization ‘WerteInitiative’, its chairman Elio Adler said the motive had not been taken into account sufficiently. Therefore, the crime had been depoliticized. As a result, the question what France or its society needed to do in order to regain control of the difficult situation there had not been asked. Crimes needed to be designated appropriately in order to make sure there could be justice, Elio Adler stated. The problem existed in Germany as well, he said. Especially in cases that involved Islamist culprits, classifications of crimes were genteel in too many cases. Useful prevention concepts were impeded that way.

Pushed Out the Window

Kobili Traoré entered his neighbor Sarah Halimi’s apartment via her balcony on April 4th, 2017. The 27-year-old murderer shouted “Allahu Akbar” and recited verses from the Quran while he beat and tortured his 65-year-old victim. Then he pushed her out the window, to her death. Instead of trying to save her, the police forces who arrived on site reportedly waited for the anti-terror division to come. When those colleagues arrived, the victim was dead.