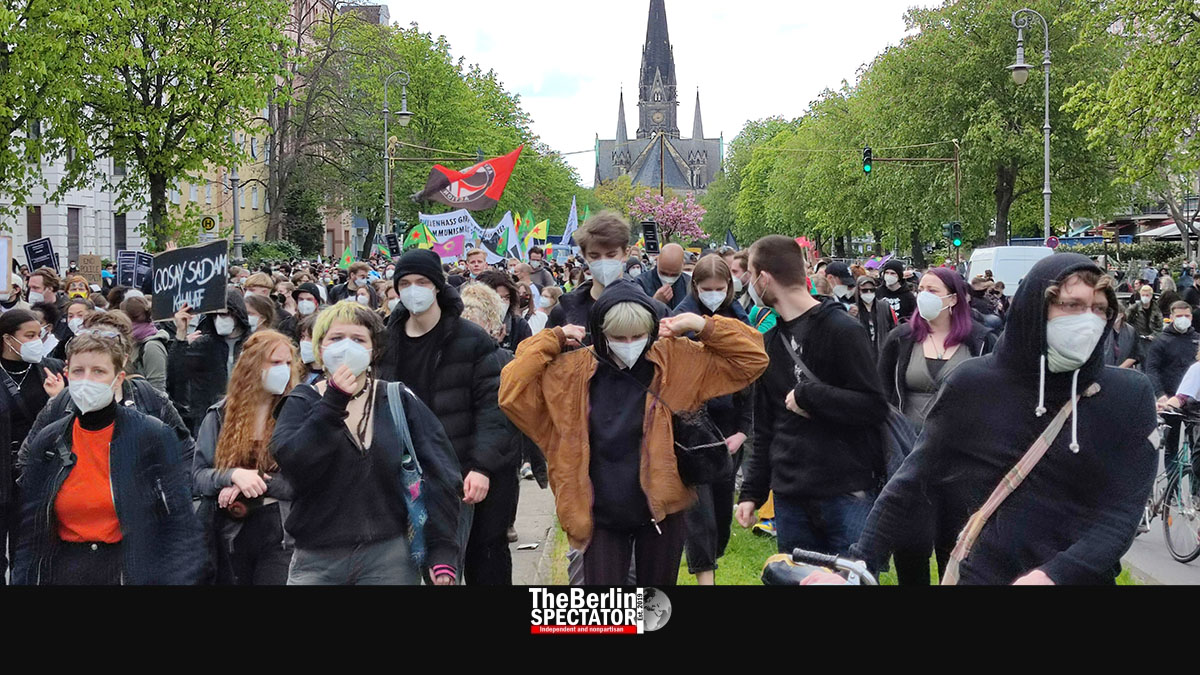 In Berlin, some 5,000 people rallied against claimed brutality and racism in the German police on Saturday. Some participants even demanded an abolition of the police as a whole.

Berlin, May 8th, 2021 (The Berlin Spectator) — There were “too many isolated cases” of police brutality in Germany, a banner at one of today’s largest protests read. Organized by left-wing groups, participants said they wanted to abolish the police altogether. “All of Berlin hates the police”, people chanted while they marched through Kreuzberg. The accuracy of some of their claims did not seem to be too important.

“Against racism and Nazis in the security authorities”, a big banner held by six protesters read. “You are the problem”, “Stop racial profiling”, “Stop police violence” and “Stop the Nazi networks in the police and the military” other signs said. Cops were accused of being fascists as well.

The very same police the protesters provoked with baseless allegations kept a low profile, probably in order to make sure they did not provide a target for the radicals among the many demonstrators. A total of 1,300 officers protected the city from them. The Berlin Police Department ordered a strong presence because they feared protesters would attack them again, as they did during a “Revolutionary May 1st Protest” a week ago, but the officers stayed in the background as much as possible. On May 1st, all policemen and policewomen on duty had come in full riot gear. This time, they did not.

The rally was peaceful as it moved through Berlin’s Kreuzberg borough towards the Neukölln district. At Hasenheide, a major street, the march stopped when police temporarily arrested a man who had scrawled something on construction site fences with a big marker. Once the officers let him go, the rally continued. During the event, a spokeslady for the police confirmed it had been peaceful. Some little incidents were reported. Unknown individuals lit illegal pyrotechnic articles from the roofs of buildings the rally passed.

The reality is that there have been some police scandals in recent months, for instance about officers in the federal states of Hesse and Berlin who were caught exchanging racist views and Nazi propaganda in chat groups. But, especially in Berlin, the state government is putting a lot of effort into combatting racism and other forms of extremism in its police force. Last summer, Interior Senator Andreas Geisel and Police Chief Barbara Slowik even introduced an extremism prevention concept designed to filter out extremist individuals before they even become police officers.

There were dozens of protests in Berlin today. On this 76th anniversary of Nazi Germany’s unconditional surrender, the victims of fascism were supposed to be commemorated at a big event in the German capital’s Alt-Treptow neighborhood.