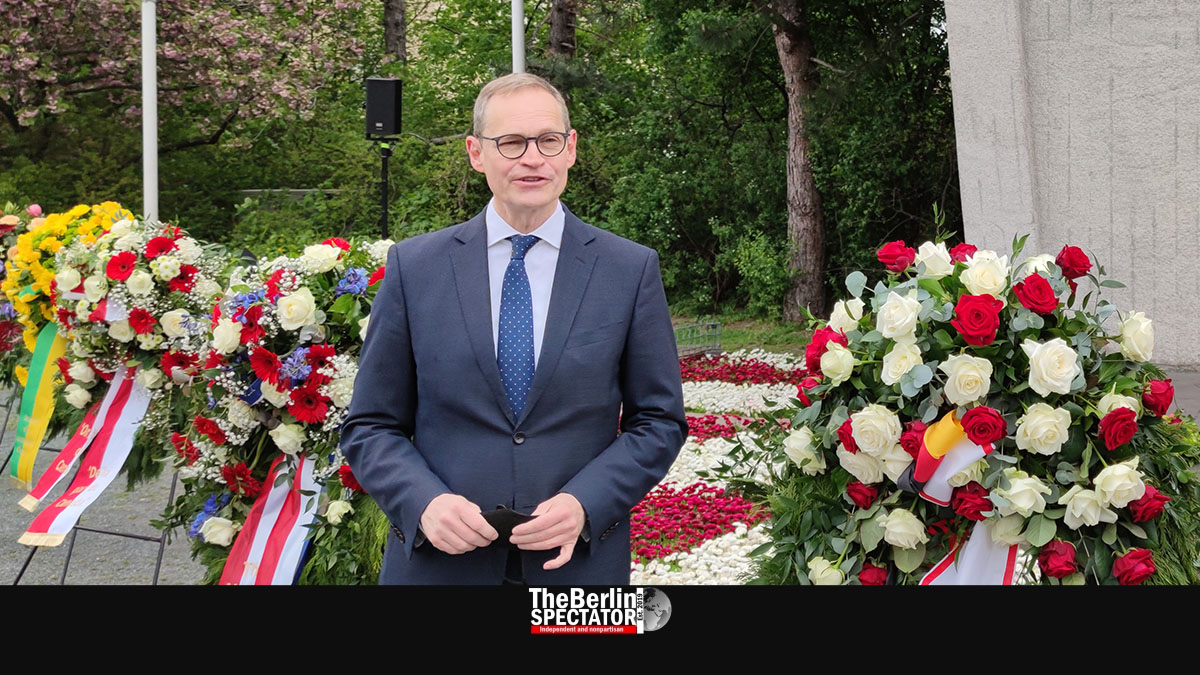 Every year, Berlin celebrates the Airlift, which ended 72 year ago. The operation organized by the Western Allies saved the lives of the residents in Berlin’s Western districts after the Soviet Union started the Berlin Blockade. A small anniversary event took place in Tempelhof this morning.

Berlin, May 12th, 2021 (The Berlin Spectator) — In order to save the residents in Berlin’s Western part, the Western Allies started the biggest airlift of all time, known as the Berlin Airlift, in June of 1948, when the Soviet blocked land and water access to West Berlin. The U.S. Air Force, the British Royal Air Force and the French Air Force had help from the air forces of Canada, Australia, New Zealand and South Africa. More than 200,000 flights took place within one year.

On May 12, 1949, 72 years ago today, the Soviet Union finally reopened the land routes. At that moment, the Berlin Airlift ended. During the operation, the Americans and other Western allies flew 12,000 tons of food, fuel and other items to Berlin. The pilots, including Berlin’s good friend Gail Halvorsen who turned 100 in October of 2020, dropped raisins and sweets for Berlin’s kids as they flew in and out. That is why the residents of West Berlin referred to those aircraft as raisin bombers. They still do.

On the 72nd anniversary of the end of both the Berlin Blockade and the Berlin Airlift, Governing Mayor Michael Müller stated that, back then, Berlin had learned that freedom needed to be won and defended over and over. This is what the Berliners had done in 1948 and 1949. “We will never forget how the Western powers defended the city’s freedom back then”, Müller said. “A few years after World War II, the occupation forces became protection forces.”

“We shall never forget the fact that Allied pilots also gave their lives for freedom”, the Governing Mayor continued. Commemorating them meant being aware of the fact that freedom and democracy were not self-evident. Even in this global pandemic, and in difficult times like these, Berlin was showing its deep gratitude to America, Britain, France and the other nations that had helped, the Mayor stressed. The Berliners would never forget the Airlift, this act of helpfulness and determination.

Two years ago, Müller had invited the entire city to a big 70th anniversary event at former Tempelhof Airport, where most raisin bombers landed during the Berlin Airlift which lasted for 11 months. In 2020, Gail Halvorsen, who would usually show up, could not come to Berlin for the anniversary because of Corona. The same applied today.

Apart from Michael Müller, Ralf Wieland, the President of Berlin’s House of Representatives, came to a small anniversary event at the Airlift Memorial next to Tempelhof Airport on Wednesday. So did Berlin’s Commerce Senator Ramona Pop and Labor Senator Elke Breiztenbach, the Chargée d’Affaires at the U.S. Embassy, Robin Quinville, the South African Ambassador to Germany, Phumelele Stone Sizani, and diplomats from the other countries that were involved in the Berlin Airlift. A Bundeswehr (armed forces) orchestra played the national anthems of those countries.