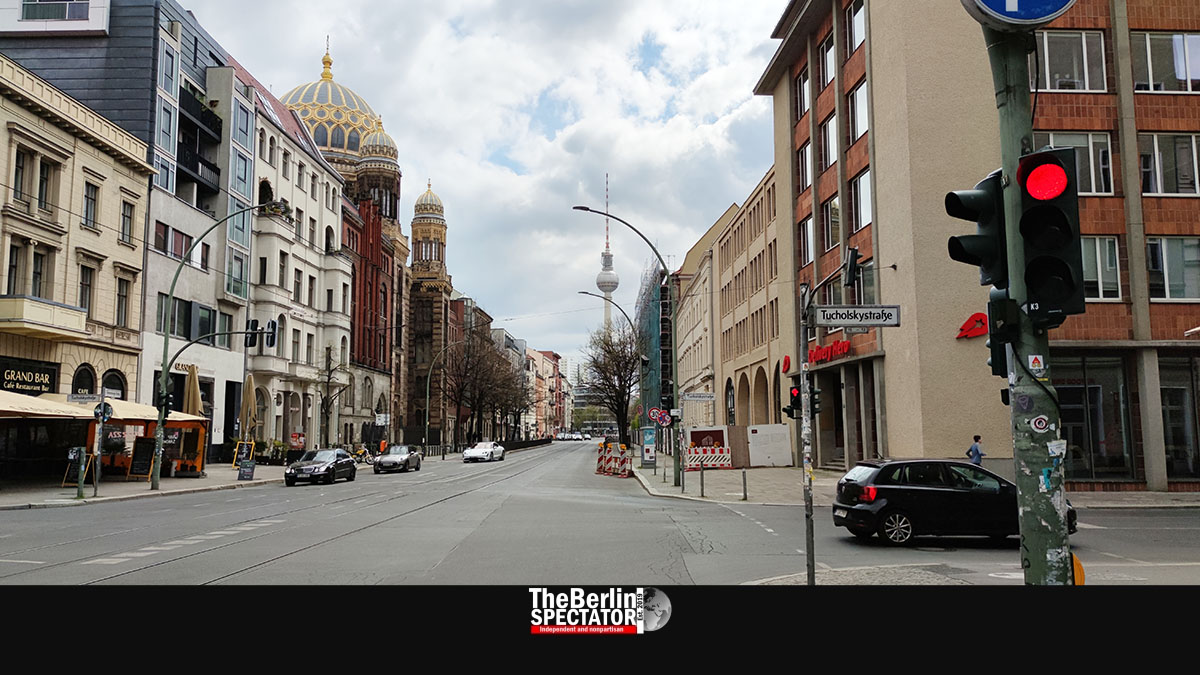 During the ongoing terror attacks against Israel from Gaza, and the war that resulted from them, the level of antisemitism in Germany is rising substantially. While President Steinmeier condemned this kind of hatred in the strongest terms, Berlin’s Interior Senator Geisel announced the city state would tighten the security at synagogues.

Berlin, May 14th, 2021. Update: May 15th, 2021, 07:52 a.m. CEDT (The Berlin Spectator) — In Berlin, the city state’s Interior Senator Andreas Geisel stated, the protection of Jewish establishments, such as synagogues and schools, was being tightened right now. “Because of the latest escalation in Israel, I assure the Jewish community in Berlin that it is getting the best protection possible”, Geisel said. The Berlin Police had elevated the security level even further than before. According to the Senator, the security authorities are monitoring the situation in Israel along with possible ramifications in Berlin very closely.

“Because of the latest developments, the Jewish community is understandably worried about its safety. We are in close contact with the Jewish congregation”, Andreas Geisel said. “Antisemitic incidents in our city are absolutely unacceptable. We firmly reject any kind of antisemitism or hostility towards Israel.” Burning flags was not an expression of opinion, but a hate crime that would be persecuted, Geisel stressed. This especially applied during protests.

Senator Geisel had good reasons for tightening security for Jews, and for his strong statement. Parts of Germany’s far left and radicals who are part of the country’s large Muslim community are defending the terror against the only predominantly Jewish state in the world. Thousands of comments on social media, threats against people and the wording of announcements for anti-Israeli protests in Germany show a clear tendency: In those circles, violence and murder are being celebrated as long as Israeli Jews are the victims. The word for this kind of hatred is antisemitism.

‘No Justification for Threats’

Many left-wing radicals and extremists of Arabic origin claim a Jewish state that defends itself against constant attacks is committing war crimes, but Palestinian terror organizations and leaders who are targeting Israeli civilians with hundreds of missiles at a time, and who are using their own people as human shields after exploiting them for decades, are not. This kind of antisemitism is spreading again quickly, as it always does when Palestinian terror organizations like Hamas or Islamic Jihad launch their attacks. But this time, the hatred seems to be stronger.

Note: The Berlin Spectator uses the words ‘extremists’ or ‘radicals’ for persons, groups or parties that fight democracy, its institutions or values, on both the far-right and the far-left. This includes terror organizations and their supporters as well.

Some haters even threaten German Jews and attack Jewish facilities in Germany, meaning they show their hatred is not only directed towards the only and tiny Jewish state, but all Jews. Germany’s few prominent Jews receive countless threats. The organization RIAS Berlin documented many of them. Most are too terrible to repeat. This level of Jew-hatred is even more alarming than the usual intensity.

Germany’s President Frank Walter Steinmeier just condemned hatred towards Jews. “Nothing justifies threats against Jews in Germany or attacks against synagogues in German cities”, he said. “We will not tolerate hatred towards Jews in this country, no matter where it comes from.” Only hours after his statement, hundreds of Arabs staged a rally against Israel in Berlin’s Neukölln district. The terror against Israel was defended at the rally.

On ARD television, Israel’s Ambassador to Germany Jeremy Issacharoff said this morning, Hamas did not have any political agenda. “They do not want peace with us. Our highest priority needs to be a political solution. Hamas was never part of those efforts.” Issacharoff stated, 2,000 missiles were not an argument in any discussion. He was referring to the number of rockets the Palestinian terror organization launched at Israel within a few days.

One of Israel’s many problems is the fact that there is no serious dialog partner on the Palestinian side. President Abbas, who was elected for four years sixteen years ago, does not want peace. His Palestinian Authority openly admits to paying terrorists who murder Israeli Jews. Hamas just wants to kill as many Jews as possible and annihilate Israel. The latter is its official goal. Talking to these kinds of haters is useless. Besides, the Palestinians have turned down all peace proposals in the past several decades.

No Lufthansa Flights to Tel Aviv

Back in Germany, antisemitic radicals from the Palestinian areas, but also from Germany and other countries, are getting ready to stage or take part in several protests this coming weekend, in Berlin and other cities. The antisemitic organization BDS, which calls for boycotts against Israel, Israeli companies and even against Israeli artists who have nothing to do with the Israeli government, announced it would join one of those protests. BDS says it was against violence. At the same time it has co-organized events for Palestinian terrorists such as Rasmea Odeh in Berlin, and takes part in rallies at which violence against Israel is being demanded and glorified, on a regular basis.

On Thursday, Chancellor Angela Merkel’s spokesman Steffen Seibert condemned the attacks on Israeli cities. Hamas and its allies wanted to “kill people randomly and arbitrary”. Israel had the right to defend itself. Because of the explosive situation in and around Israel, Lufthansa cancelled all flights to Tel Aviv until further notice. Depending on the situation, the airline might resume those flights on Saturday, German-language media reported.

As a sign of solidarity, the Israeli flag was raised at the famous ‘Römer’ in Frankfurt and at the Bavarian state chancellery in Munich. In neighboring Austria, the flag was seen on the roof of the Chancellery in the capital Vienna. Another Israeli flag that was raised in front of the ‘Konrad Adenauer Haus’, the headquarters of Chancellor Angela Merkel’s conservative party CDU in Berlin, was stolen last night by unidentified men.